The Marinwood CSD Solar program has been mysteriously delayed for undisclosed reasons to the public.  Will the Marinwood CSD hold SolEd Benefit Corporation to its contract?

Posted by Save Marinwood at 3:42 PM No comments:

The Marinwood CSD Solar Contract- ANOTHER SMOKING GUN the Audiotapes

Dandridge presented the CSD the SEED proposal in September 2012 (violation #1) but did not reveal that she owned the company SEI. Then in October 2012, she recused herself and the board voted for the "no bid" contract (violation #2). County counsel objected and Dandridge resigned to avoid the conflict of interest but this still does not absolve the prior or subsequent actions of the board.

Not only did board members Bruce Anderson, Tarey Read, Bill Hansel and Leah Green knowingly enter into a no bid contract with Dandridge they also DID NOT ALLOW PUBLIC DISCUSSION (violation #3).

The audio was provided by Marinwood CSD Manager Tom Horne in November 2012 and segments are suspiciously inaudible (violation #?).


As of 6/10 2016 , the SolEd Solar construction has been delayed for reasons unknown to the public.

Posted by Save Marinwood at 12:31 PM No comments:

Discussion with Damon Connolly on the relocation of Ritter House Homeless services to 67 Mark St. San Rafael near Smith Ranch Rd.
From the June 8, 2016 meeting at Marinwood Community Center


Editors Note:  It was an excellent meeting.  I really like Damon even though I don't always agree with him.  The homeless discussion should be shared.   I disagree with the fellow from East Terra Linda that commented on Nextdoor that there is "nothing to worry about".   We have to educate our neighbors about this proposal.

Just last night I ran into a homeless guy in Marinwood park on drugs or drunk. He was talking with himself and seemed out of touch with reality.   These sorts of incidents will increase if Ritter re-locates.   Good homeless shelters refuse admittance of the worst of the homeless.  Where do they go?  Into the parks and neighborhoods surrounding community of course.
Posted by Save Marinwood at 8:47 AM No comments:

Mohammad Ali on War and Government 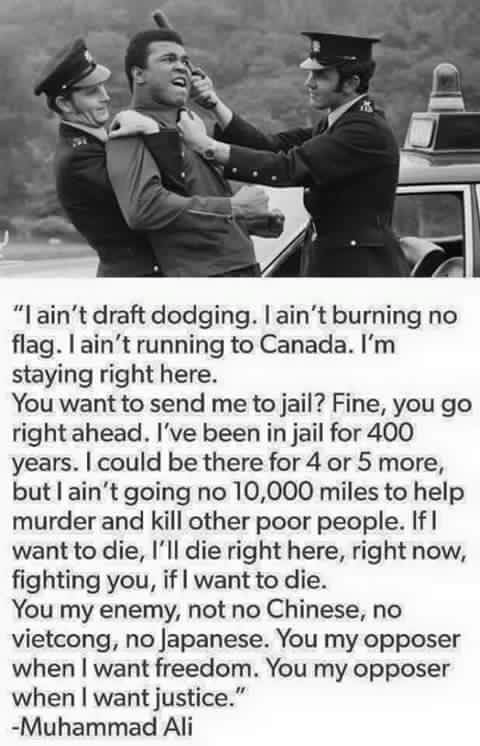 Posted by Save Marinwood at 10:25 AM No comments:

Lucas Valley Road Before and After Tree Trimming.

Gary Giacomini, George Lucas's lawyer threatened the Marin County Supervisors on April 20, 2015 that Lucas Valley Road "shall never become a scenic road now or in the future" because it would interfere with George Lucas's development plans.  It appears that in 2016, the county has granted Gary Giacomini's wish and is in the process of destroying one of the most beautiful scenic roads in Marin.

The cover story is "fire protection"  but this  has not been done in at least 30 years.  Residents suspect that by removing vegetation, the road will not qualify for a scenic designation .  Another theory is that it is preliminary work prior to road widening to allow for more development. The cover story of "fire safety" falls apart under close examination.

The tree canopies are being denuded far in excess of what is required under the most stringent road standards.  This is a costly job and money is tight at the county.  Why is this project at the top of their priorities especially after the community opposition?
Posted by Save Marinwood at 12:00 AM No comments:

Should you follow your passion, wherever it may take you? Should you do only what you love...or learn to love what you do? How can you identify which path to take? How about which paths to avoid? TV personality Mike Rowe, star of "Dirty Jobs" and "Somebody's Gotta Do It," shares the dirty truth in PragerU's 2016 commencement address.

There were thousands of college commencement speeches around the country this year for the Class of 2015. But there was one missing -- one very truthful, funny and witty speech that graduates should've heard, but didn't. Well, here it is, spoken by George Will, Pulitzer Prize-winning columnist at the Washington Post.
Posted by Save Marinwood at 12:00 AM No comments:

Hi Neighbors and Friends,
If you didn't get a chance to attend a Plan Bay Area Update workshop, you can still make comments on the Plan by emailing them toinfo@planbayarea.org
Amazingly, at the June 4th Plan Bay Area Update workshop, the Association of Bay Area Government (ABAG) and the Metropolitan Transportation Commission representatives stated that the Plan Bay Area Update is now planning for greater job growth, population, and housing between 2010 and 2040 than the 2013 Plan Bay Area did.  For example the 2013 Plan Bay Area projected a Bay Area population growth of 2.1 million people between 2010 and 2040.  The Plan Bay Area Update projects a Bay Area population growth of 2.4 million people during the same time period.
Here's a link to the Regional Forecast of population, jobs, and housing for the Plan Bay Area Update, from 2010 to 2040:
http://planbayarea.org/file10300.html
In general, ABAG and MTC are asking you to choose between the below 4 Scenarios.  However you don't have to accept any scenario and could make other comments instead. For each scenario, MTC and ABAG have generated forecasts for jobs, housing, population, travel-demand and transportation revenue.  To see these forecasts for Marin County, please follow the below link:
http://planbayarea.org/file10275.html
**Please note that, based on past experience, we question whether these forecasts are accurate, since we have not seen any analysis completed by objective independent experts.

What are the scenarios?
1. NO PROJECT SCENARIO is included to show trends assumed under adopted local general plans and zoning without an adopted regional plan, and assuming no new transportation projects beyond those currently under construction or those that have both full funding and environmental clearance.
Forecast of the No Project Scenario in Marin
Population: 2% Share of Total Regional Growth; 17% Growth from 2010 to 2040
Employment: 2% Share of Total Growth; 25% Growth from 2010 to 2040
Housing: 9000 Growth in Housing Units; 1% Share of Total Regional Growth; 4% Growth in PDAs

Vote Otis Bruce for Judge (Justice is the most important Virtue)

A large crowd gathered at the San Rafael City Council Chambers Monday, June 2, 2016 to discuss the relocation of the Ritter House for Homeless Services and REST (Temporary Homeless Shelters).  The room was packed with member of Marin Organizing Committee and a few members of Marinwood and the business community.  Justin Kai, Marinwood CSD president spoke eloquently about why the relocation to 67 Mark Dr. San Rafael, CA would create big problems for the Marinwood, Mont Marin and East San Rafael.
Posted by Save Marinwood at 10:29 PM 3 comments:

Homeless Center to be relocated next door to Marinwood? Meeting Tonight at San Rafael City Hall at 7 PM!!


By Janis Mara, Marin Independent Journal
POSTED: 06/05/16, 7:21 PM PDT | UPDATED: 43 MINS AGO
11 COMMENTS
A compromise proposal in which the Ritter Center would move all or part of its food pantry, showers and mail service elsewhere will be presented at the San Rafael City Council meeting Monday.
The city has been considering changing or revoking Ritter’s use permit in an attempt to reduce the number of people served there. The alternative plan, which would leave the permit unchanged, was hammered out between the center and city officials over the past few weeks.
“We’re trying to find some win-win opportunities that help both the city and Ritter,” said Andrew Hening, San Rafael’s director of homeless outreach and policy.

The proposed location is  at 67 Mark Drive, San Rafael

It is situated atop a toxic plume site left by Pac Bell at 23 Mark Drive
and Fairchild Semiconductor Site next door.
The council will discuss the proposal at its 7 p.m. meeting at City Hall.

see Full Article in the Marin IJ HERE
Posted by Save Marinwood at 9:27 AM No comments:

More than one-third of Bay Area residents say they are ready to leave in the next few years, citing high housing costs and traffic as the region's biggest problems, according to a poll released Monday.

Of the 1,000 people polled by the Bay Area Council, 34 percent said they are considering leaving. Those who have lived here five years or less are the most likely to want to leave.

"This is our canary in a coal mine," said Jim Wunderman, president of the Bay Area Council. "Residents are screaming for solutions."

In another grim result, the number of residents who believe the region is on the wrong track has increased sharply in the past year, the poll found.

"This survey underscores that we have a choice," said Carl Guardino, president of the Silicon Valley Leadership Group, which is pushing to raise sales taxes by a half-cent in Santa Clara, San Benito, Santa Cruz and San Francisco counties to fund transportation. "We can be enraged, or we can be engaged. We can engage the broader community on solutions that actually tackle these seemingly insurmountable problems."

Among the solutions that have been proposed is creating high-density housing close to job hubs, along transit corridors or in both locations.

Some observers say the Bay Area's challenges, which have arrived amid the job boom in the tech hubs of Silicon Valley, is pushing low- and middle-income people out and could transform the region into a Manhattan-like megalopolis.
"The economic divide in the Bay Area is real," said Russell Hancock, president of Joint Venture Silicon Valley. "We will lose low-income earners, and they will be replaced by high earners. We are losing the middle class as well."

People in Santa Clara County and San Francisco are feeling the least optimistic about the direction of the Bay Area.

Optimistic and pessimistic attitudes didn't vary much by income group.

The survey also found that people who spend more of their money on housing were more likely to seek an escape from the Bay Area in the next few years.

Despite the number of respondents who said they're ready to go, 54 percent said they had no plans to defect from the Bay Area.