Editor'Note: See associated posts in the blog below concerning the marginal costs of adding up to 150 children to our schools from affordable housing which contributes little tax revenue to the community.  A video clip of the 10/27 meeting with Bridge Housing Vp, Brad Wilban explaining the typical number of children to expect and the companies expected tax contribution will be coming soon too.  In the 12/4 Marinwood Village meeting, he recanted his original estimates.


Due to increased enrollment, two years of deficit spending and ongoing cuts from the state, the Dixie School District will face $362,000 in reductions for the 2012-13 school year.

In the last few years, the district had been able to dip into its one-time reserves and federal funds to "weather the storm," according to Business Manager Robert Marical. Now, a combination of increased enrollment, lower property taxes and states cuts have created the "perfect storm" for the upcoming school year and district staff are not sure where the cuts will hit their $19 million budget, he said.

"At this point, we really just wanted to indentify the amount [of reductions] and we're not sure where there will be reductions," Marical said.

The state cut $3.2 million from the district in the last three years as part of statewide categorical funding reductions to basic aid districts. These districts are funded largely through property taxes as opposed to revenue limit districts, like San Rafael City Schools, that rely on a larger amount of funds from the state. The reductions are ongoing, and the district expects $1.1 million to be cut each year, according to Marical.

From the beginning of the recession to the 2009-10 school year, the district made several reductions to deal with the first wave of state budget cuts. These included furloughs for employees, a 15 percent reduction in school site, administration, maintenance and custodial budgets, canceling summer school, reductions in purchases of new textbooks, cuts to transportation staff and salary freezes.

In May 2011, the community approved Measure A, a parcel tax that increased the levy to $107 a year. The parcel tax, which will last eight years, was approved by an 80 percent majority of the vote and helped shield the districts from more reductions.

In the 2011-12 school year, the parcel tax raised close to $2 million in additional revenues that mostly went to hire 11 full time employees for the fourth and fifth grades. Funds also went to the music, science, art, drama and French programs.

"We've been fortunate that we haven't had to make cuts to staff like other districts have," Marical said.

Despite the tax, the district was still deficit spending for the last two years. Enrollment, which had been flat until recently, jumped up 4.5 percent, or 85 students.

Property tax projections also fell short by around $250,000, according to Marical. District staff are still trying to analyze all the reasons for the shortfall. One explanation is that the Marin Commons property on 1600 Los Gamos Road fell off the tax roll when the county bought it for $29.5 million in October 2011 to convert it to a new emergency operations and sheriff’s headquarters.

Now that the district knows the size of their budget gap, they will begin seeing where they will make reductions. "I really can't say where the cuts will occur," Marical said. "It's a process to work through that with district budget committee."
Posted by Save Marinwood at 12:00 AM No comments:

Supervisor Susan Adams has some " 'splaining to do"

Editors Note: We recently asked Supervisor Adams in March 2013 to provide information about the Marinwood Priority Area in her upcoming Town Hall explaining the planned widening of Miller Creek Rd and Caltrans project.  She refused and instead suggested that it wasn't approved.  This begs the question of why the apparent unnecessary widening of Miller Creek Rd.  Is this a pre condition for the approval of the Marinwood Priority Development Area ? Many people do not know that Las Gallinas and Miller Creek was originally designed as commercial boulevards but economic conditions caused Hoytt to build them as residential.

It is time to reveal the development plan for Marinwood Priority Development Area for Urbanization.


We think the residents deserve some answers about this six year old plan.

Check out this link Plans for Marinwood PDA in 2007

From page three we learn:

In 2007,  Marinwood was identified as a Priority Development Area (all land between Las Gallinas and the 101 Freeway) for intensive urban development which will have " high levels of Affordable Housing (at least 50%)" and intensive developments of  a MINIMUM 25 units per acre (or 3 times the density of housing units currently).

Marinwood was nominated a PDA BEFORE Supervisor Adam's last election where she spent over $150,000 in campaign mailers to defeat Kerry Mazzoni.

The Marinwood Priority Develpment area is essentially a plan for "suburban renewal" to rebuild Marinwood.  It is part of a drastic experiment in "Smart Growth" which will be the first of it's kind in Marin and will permanently change our 60 year old Marinwood suburb to a crowded "Transit Village".  There is a high probability that your street will be rezoned for apartment buildings.

Only a few political insiders knew this was happening.  The Marinwood Priority Development Area was curiously not mentioned in her frequent political mailers slamming Kerry Mazzoni.

If it is such a great thing for our community, why wouldn't she want to boast of her "achievement"?

Could it prove embarassing and unpopular?  Shouldn't we expect our politicians to consult the public on changes of this magnitude?

Now they claim "the community" decided they wanted this development in 2007.  Did anyone know that  new affordable housing (50% of all growth) will pay no taxes and need to be supported by the remaining residents?

Does Supervisor Adams know that 43% of the residents have moved here since 2007?

Why is Marinwood-Lucas Valley planned to host 71% of all affordable housing in Unincorporated Marin? Why will we have 83% of extremely low to low income residents here? Why is the rest of NIMBY marin, dumping their housing here? 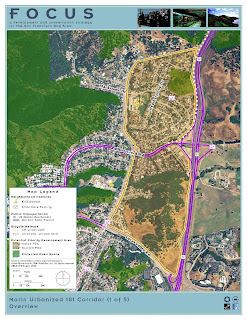 Here is a way to check.  Go to www.Crimereports.com and plug in the address of the neighborhood that has affordable housing like Hamilton and compare it with Marinwood-Lucas Valley crime.  It will give you a good idea.

You can also go to Marin Housing Authority for property addresses and Bridge Housing (www.bridgehousing.com) , proposed developer of  Marinwood Plaza for more information.  When comparing properties be certain to notice the units size, income  and resident qualification.  You can draw your own conclusions.

What ever your opinion about the coming housing, I hope you'll engage your friends and neighbors in this important topic.