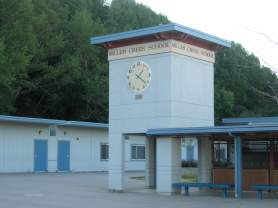 Editor's Note:  Andy Hyman has held elective office on the Dixie School Board since 2002.   He currently serves as president and represents the public oversight of the the Dixie schools.  The Dixie School system is facing huge costs from affordable housing developments like Marinwood Village.
In addition to the costs of possible relocation of the Dixie school bus yard next to the Dixie School district will need 3-7 portable classrooms at $150,000 each plus teachers, books, computers and support staff for the added school population.  The cost is in the millions of dollars. At the 3/28/2013 Marinwood Association meeting, he explained that additional school funding was being sought by Susan Adams from various sources including capital funds and grants from the Marin Community Foundation.
Since the publication of this article in 2011,  school enrollments have increase by at least 80 students and the budgets have been cut an additional $340,000 and further reduced in the latest budget cycle.

"Dixie School District has also been impacted by the state budget crisis with state funding cuts and with the Basic Aid Fair Share. Since 2009-10 we have been cut over $3.2 million in state funding, with expected future cuts of $1.1 annually. Revenues have been stagnant and for 2011-12 were below the level of funding we received in 2007-08. Within the same period of time expenditures have increased over $300,000."

Clearly, we have a funding crisis now. It will only get many times worse with Marinwood Village which is estimated to bring 150 children to our schools without any tax base to support them.
The Dixie School Board must address the community and provide analysis and advice.  As of March 11, 2013 the Planning Commission has not heard an official statement from Mr Hyman or the Dixie School Board on school impacts of a massive student population increase from six large affordable housing projects without supporting tax revenue.


Posted: 10/09/2011 12:02:00 PM PDT
Navigating a difficult financial climate and maintaining a high quality of education have been named as priorities by all three candidates for the board in North San Rafael's Dixie School District.
Incumbent Andrew Hyman and challengers Julie McDaniel and Jennifer Vuillermet are running for two open seats. Board member Kristiana Raube is not seeking re-election.
Like other districts, the Dixie district has been squeezed by the economic downturn. In the past three years it has been forced to make staff reductions and furloughs, freeze salaries and cancel summer school to help make up for millions of dollars in lost funding.
In May, voters approved a parcel tax hike of $107 — the total tax is now $352 — with an overwhelming 80 percent majority, but more difficult times are expected.
Andy Hyman, the school board's current president, said the board will have to consider cuts and should look to non-classroom items first, such as the district's practice of owning and operating its own school bus system.

"Our budget as it stands is unsustainable going forward," Hyman said.

McDaniel said she would want to explore potential revenue sources, such as leases on unused district real estate.
"Impacting the classrooms and the teachers' salaries would be one of the last things that I would recommend doing," McDaniel said.
Vuillermet said she would want to learn more about the budget and seek input from teachers,
parents, administrators and other board members before identifying budget fixes.
"Most of the budget you don't have any flexibility with," Vuillermet said. "The important thing is to focus on the 20 or 30 percent that we have some control over."

On the issue of instruction, the three candidates said they would seek to balance core subjects that are the focus of standardized tests, such as math and English, with other subjects such as music and art.
Vuillermet said the emphasis should be on core subjects.

"In order to be marketable for when these kids hit the job market, I think these kids need to have the basics down very well, they need to have math, science, reading, writing," Vuillermet said. "All of those are very critical, and I think those need to be the focus. That being said, I think you do need to educate the whole child."

McDaniel said she has mixed feelings about standardized tests, and supports exploring options such as moving standardized tests to the beginning of the school year to help teachers focus on material other than what is covered by tests.

"Right now our teachers are doing a fantastic job with the curriculum," she said.
Hyman said non-core subjects and education that target students' emotional and social development should have a prominent place in the curriculum.

"A math or an English language test doesn't get at educating the whole child," Hyman said. "We're proud of the test scores, but it doesn't tell the whole picture."

lll
Posted by Save Marinwood at 12:00 PM