Citizen at the Plan Bay Area 2040 public workshop asks planners why they using a plan that is projected to FAIL from the start. MTCs own data shows that Plan Bay Area 2040 will INCREASE low income and High income households.  The vast majority in the middle class will DECLINE.  The planners from MTC gave the predictably, evasive answers. Filmed at Mill Valley Community Center May 23, 2017


Public comments are due on Thursday, June 1st. Find out more at 2040.planbayarea.org
Posted by Save Marinwood at 5:49 PM No comments:

Citizen at the Plan Bay Area 2040 public workshop asks planners why they are using false and incomplete data to project transportation use  and why Sea level rise is not taken seriously.  The planners from MTC gave the predictably, evasive answers. Filmed at Mill Valley Community Center May 23, 2017

Posted by Save Marinwood at 5:46 PM No comments:

IMPORTANT: The correct website address for information on Plan Bay Area 2040 is http://2040.planbayarea.org/. Your comments are due Thursday. June 1, 2017. Please take a few minutes now to let them know how you feel about the twenty five year plan that could urbanize Marin County. 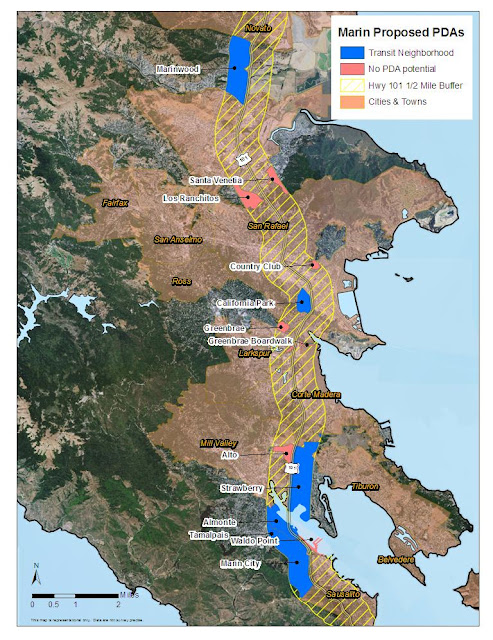 Posted by Save Marinwood at 12:54 PM No comments:


Affordable housing developers have figured ways to skim profits from projects by inflating development costs for maximum tax subsidies.
Posted by Save Marinwood at 12:00 PM No comments:

Waiting for our Solar Savings to Begin at Marinwood Pool

It looks like our savings with the SolED solar project will NEVER HAPPEN.   Recent price increases with electrical costs from PGE have eliminated all potential saving with our twenty year contract.

Marinwood will now be locked into a bad deal for TWENTY YEARS.  The expensive custom solar carport at the Marinwood Pool many never fully recover its cost. SaveMarinwood di
warn the CSD about the SolEd project which was first suggested by former Marinwood CSD Cyane Dandridge in 2013 (and who interestingly profited from the deal).   The public recognized the abnormally large cost of the power purchase agreement (PPA) vs an outright purchase.   We paid anywhere from four to seven times the cost over a straight purchase. Our initial capital investment could be fully paid off in seven years.

David Kunhardt, CEO of SolEd formed a company a few months prior to bidding on the project.  His financier, Richard Dovere, was a 29 year old entrepreneur from New York City who "specialized" in unique solar financing arrangements.  SolEd had a similar contract with the City of St Helena and fired SolEd just about a month before Marinwood signed a contract. St. Helena was upset at the broken promises and delays.

Marinwood CSD was warned and provided evidence yet despite all commonsense warnings voted unanimously to enter into a twenty year contract with Soled and the SSGgroup.

Everyone said that we were getting "free solar energy" with the PPA.  Now it looks like we got a TWENTY YEAR lesson about the word "free".

Eric Dreikosen, Marinwood CSD manager arrived after the initial consulting contract was signed but faithfully worked for over a year during the contract delays and the extended construction delays to see the deal through.  He never once lost faith in the project or questioned the soundness of the proposal.

We now have more large projects in the pipeline. Will the Marinwood CSD repeat their mistakes?   The kitchen in the firehouse and community center,  replacing the maintenance shed and stream erosion repair could cost the district over a million dollars.

Posted by Save Marinwood at 8:19 PM No comments:

Marin Supervisor Judy Arnold states that Assemblyman Mark Levine is sponsoring a bill to make Marin a Metropolitan County. It will allow higher housing density on par with urban San Francisco. Such a designation was strongly objected to by the voters and Assemblyman Levine successfully passed a temporary designation back to "suburban" which allows lower density housing. It should be noted that Ms Arnold could be confused and in fact Mr. Levine could be creating a bill to make "suburban" designation permanent. It is unclear from Ms. Arnolds' statement. Maybe Ms. Arnold was tired and misspoke. 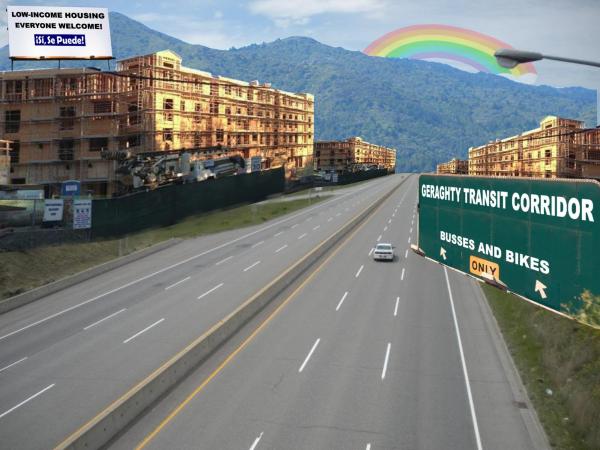 Posted by Save Marinwood at 9:35 AM No comments:

Where are the news stories about "The Twenty Five Year Plan" for Marin? 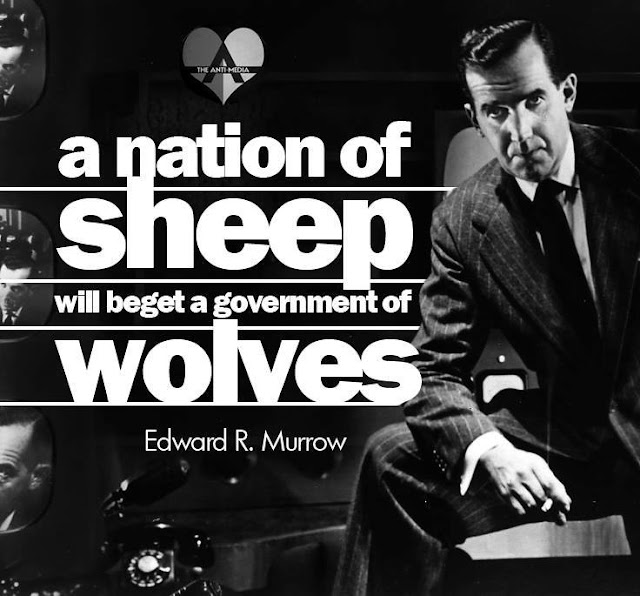 Yesterday I attended the Marin Board of Supervisors meeting to hear the VERBAL final report on Plan Bay Area 2040 given by Brian Crawford of the Community Development Department. Richard Halstead of the Marin IJ was in attendence

It outlined the 25 YEAR PLAN that will likely lead to the urbanization of Marin.  Despite many objections by local politicians and citizens about deficiencies in the plan, the supervisor voted to approve it unanimously.

I am quite surprised that no local journalists seem to take notice of this story.

Posted by Save Marinwood at 4:01 PM No comments: MIKE NELSON/EPA/NewscomStop me if you've heard this one before. A state considers implementing a single-payer health care system, then learns it would have to use its entire annual budget, plus some, to fund the idea.
The latest stop on this magical mystery tour of progressive health care plans is California, where U.S. Sen. Bernie Sanders (I-Vermont) has been campaigning on behalf of a proposed state-run single-payer system. On Monday, state lawmakers in Sacramento got their first look at the price tag for the proposal, which rings in at a whopping $400 billion annually.
The Sacramento Bee notes that, even after accounting for an estimated $200 billion that could be saved by replacing current state-run health programs with the single-payer program, the state would still need to come up with $200 billion annually.
This year's state budget in California, by the way, is about $180 billion. That means that implementing a single-payer health care system would require doubling (at least) the state's current tax burden. The analysis of the health care proposal presented to lawmakers on Monday suggests a 15 percent increase to the state's payroll tax to provide the necessary revenue.
The cost analysis is seen as "the biggest hurdle to creating a universal system," the Bee reports.
If this sounds familiar, that's because it is. Just last week, we reported on a similar single-payer proposal in New York State, which would require doubling (and possibly quadrupling, depending on which projection you believe) the state's tax burden. Vermont's attempt to implement a single-payer health care system collapsed in 2014 because the costs were too high. Colorado voters rejected a proposed single-payer system in 2016 when faced with the prospect of increasing payroll taxes by 10 percent to meet the estimated $25 billion annual price tag.
The list of states that have tried to go single-payer is still a small sample size, but a fairly wide ranging one. It includes states with large populations and small ones. States with a variety of economies and tax systems. States that are growing quickly and those that aren't.
Despite that range of variables, one thing remains constant: state-level single-payer health plans would require massive increases in tax revenue, equal or larger than the amount of revenue consumed by every other state-level program in a single year.
California's proposal is particularly expensive because it's not just a single-payer proposal, but a generous one. As Vox details, "the state would pay for almost all of its residents' medical expenses—inpatient, outpatient, emergency services, dental, vision, mental health, and nursing home care—and Californians would not have any premiums, copays, or deductibles." Undocumented immigrants would be covered too.
Even in the state that spends the most money each year, the $200 billion increase is asking for a lot. Californians pay an average of 11 percent of their income in state and local taxes, the sixth highest of any state, according to the Tax Foundation, a Washington, D.C.,-based think tank that favors lower tax rates, and the state's top income tax rate of 13.3 percent is already the nation's highest.
"Needless to say, doubling California's tax burden would give them the highest taxes in the country by far," Joe Henchman, vice president of state projects for the Tax Foundation, told Reason on Tuesday.
The proposal "will cost employers and taxpayers billions of dollars and result in significant loss of jobs in the state," warns the California Chamber of Commerce.
A single-payer system at the federal level would have the same fiscal problems, of course, but unlike state governments that are required to balance their budgets annually, a nationally single-payer system would just be added to the federal government's ever-growing tab. That's not necessarily better, but it would offer something of a solution to the problem of how to pay for a hugely expensive new entitlement. Until Democrats control the federal government, though, state-level efforts like the ones in New York and California are likely to continue percolating.
There's one other thing that's fairly consistent among the states that have proposed single-payer systems in recent years: When voters find out how much a single-payer system will cost, they are much less likely to support one.
Single-payer advocates learned that lesson last year in Colorado at the ballot box, as the state turned blue for Hillary Clinton even as 79 percent of voters said "no" to single-payer health care.
Other polling bears out that relationship. A recent poll commissioned by the California Association of Health Underwriters, found that 66 percent of California residents are opposed to single-payer health care. Opposition increased to 75 percent when those polled were told the price tag for the system is $179 billion annually—which is actually lower than what the legislative analysis suggests.
There's also this analysis from the Kaiser Family Foundation, which shows how support for single-payer health care declines when there is a price tag attached to the idea. Kaiser Family Foundation
When free health care provided by the state government isn't free, it's a much more difficult sell. Progressives in California have their work cut out for them.
Posted by Save Marinwood at 12:00 PM No comments:

Brian Crawford gives a "for your ears only" report at the May 23, 2017 Marin County Board of Supervisors on Plan Bay Area 2040. It is a TWENTY FIVE YEAR plan for all of Marin's 550,000 residents but somehow, this important report could not have been presented too publicly so they could avoid negative publicity. Marin IJ reporter , Richard Halstead was present but it is uncertain that he will cover it fairly or at all. Comments from the public are due June 1, 2017. There has been very little coverage in the local paper. The plan is a high watermark of corruption and crony capitalism flying under the banner of "environmental protection" and strips citizens from democratic decisions that affects their neighborhood and community. Despite Supervisor Kate Sears interest in Sea Level rise, she made no comment on the plan for housing in the FEMA flood zone and displacement in Marin City. The supervisors voted unanimously to support it.
Posted by Save Marinwood at 8:50 AM 1 comment:

What about the VOTERS right to determine the future of their own communities?
Posted by Save Marinwood at 12:00 AM No comments:

Presentation to Marin Politicians only at this months TAM meeting.
Posted by Save Marinwood at 8:41 AM No comments:

Cynthia Murray, former Marin County Supervisor has some sharp words for Plan Bay Area 2040. Unfortunately, she spoils them by calling for more government controls and taxes to fix the flaws. Her critiques, however are well noted even if her solution will drive business away from California.

Posted by Save Marinwood at 9:52 AM No comments:

Diane Furst, Corte Madera councilperson asks three simple question about Plan Bay Area 2040 and gets no response.  1.) Where is your data about 700 jobs for the tiny town of Corte Madera? 2.) Why are you planning for housing in FEMA flood zones?  3.) What are you going to do about displacing thousands of residents to build multifamily homes?
Posted by Save Marinwood at 12:00 AM No comments:

Brad Paul, deputy director of ABAG suggests that Mixed use developments such as the 20 unit found on fourth street is an excellent example of increased density that fits within the Marin development patterns.
Posted by Save Marinwood at 11:27 AM No comments: