The Ant and the Grasshopper 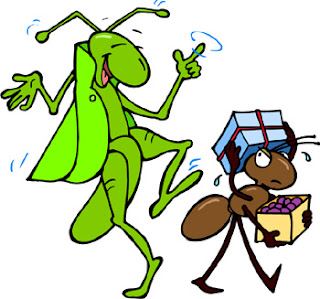 Once there lived an ant and a grasshopper in a grassy meadow. All day long the ant would work hard, collecting grains of wheat from the farmer's field far away. She would hurry to the field every morning, as soon as it was light enough to see by, and toil back with a heavygrain of wheat balanced on her head. She would put the grain of wheat carefully away in her larder, and then hurry back to the field for another one. All day long she would work, without stop or rest, scurrying back and forth from the field, collecting the grains of wheat and storing them carefully in her larder.

The grasshopper would look at her and laugh. 'Why do you work so hard, dear ant?' he would say. 'Come, rest awhile, listen to my song. Summer is here, the days are long and bright. Why waste the sunshine in labour and toil?' The ant would ignore him, and head bent, would just hurry to the field a little faster. This would make the grasshopper laugh even louder. 'What a silly little ant you are!' he would call after her. 'Come, come and dance with me! Forget about work! Enjoy the summer! Live a little!' And the grasshopper would hop away across the meadow, singing and dancing merrily.

Summer faded into autumn, and autumn turned into winter. The sun was hardly seen, and the days were short and grey, the nights long and dark.

It became freezing cold, and snow began to fall. The grasshopper didn't feel like singing any more. He was cold and hungry. He had nowhere to shelter from the snow, and nothing to eat. The meadow and the farmer's field were covered in snow, and there was no food to be had. 'Oh what shall I do? Where shall I go?' wailed the grasshopper.

Suddenly he remembered the ant. 'Ah - I shall go to the ant and ask her for food and shelter!' declared the grasshopper, perking up. So off he went to the ant's house and knocked at her door. 'Hello ant!' he cried cheerfully. 'Here I am, to sing for you, as I warm myself by your fire, while you get me some food from that larder of yours!' The ant looked at the grasshopper and said, 'All summer long I worked hard while you made fun of me, and sang and danced. You should have thought of winter then! 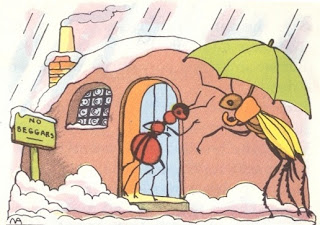 Find somewhere else to sing, grasshopper! There is no warmth or food for you here!' And the ant shut the door in the grasshopper's face.

It is wise to worry about tomorrow today.
Editor's perspective: The politicians will be wise to consider the jobs, water and schools people will before building thousands units of high density housing in Marin.
Posted by Save Marinwood at 9:14 PM No comments:

PLAYGROUND：あきちあそび from Ryosuke Oshiro on Vimeo.
Posted by Save Marinwood at 9:12 PM No comments:

Email ThisBlogThis!Share to TwitterShare to FacebookShare to Pinterest
Labels: planning


Marin County Planning Commission receives staff report about he Stream Conservation Ordinance on May 13, 2013.  It was adopted shortly thereafter by the Board of Supervisors
Posted by Save Marinwood at 12:23 PM No comments:

The Difficulty of Mapping Streams and Creek Setbacks

Posted by Save Marinwood at 11:58 AM No comments:

Smears and Yellow Journalism at the Marin IJ

An Open Letter to the Marin IJ:

Wow, Richard Halstead did not waste any time trying to smear me. He was standing behind me in the registrars office yesterday and could have interviewed me why I would want to run-especially if his 2016 story was true. It was b.s. in 2016 and fully vetted by videotape proof. He didn't interview me then either. It is a sad day for the Marin IJ and journalism.

"Another local race worth watching is the contest for two openings on the Marinwood Community Services District. So far, incumbent Bill Shea, Sivan Oyserman and Stephen Nestel, a passionate opponent of Plan Bay Area and increased housing densities, have declared their candidacies and filing for the district seats will remain open until Wednesday.
In 2016, Nestel, a vocal critic of the district who often videotapes meetings, got into a physical altercation with Justin Kai, a Marinwood CSD board member at the time, that resulted in Kai seeking a restraining order to keep Nestel away from him. The request for the restraining order was denied."
see story here
=======

So based on nothing more than a one sided account by the "victim" and the judge throwing the matter out of court,  a front page, above the fold article runs in 2016 while burying a rape story on page 6.
Have you no decency and respect for the profession of journalism?
========

I chose to ignore the matter in 2016.  In this internet age, the lie has reverberated with "gotcha" claims of wrongdoing.   The facts have not changed.  I was the victim of Justin Kai's aggression while walking my dogs in front of my house. He videotaped the encounter and based on the evidence, the judge threw it out of court.  Essentially, it is a non story of two people getting angry and walking away.
Why does the Marin IJ want to take sides in this matter?   Clearly, Mr. Halstead thinks smears can stop me from participating in local democracy.
I am happy to speak with any fair minded reporter about my candidacy in Marinwood CSD.
My chief concern in Marinwood is a  maintenance shed compound that is being pushed without public oversight.  It violates the Stream Conservation Ordinance established in 2007 and is preposterously out of scale.  If built, it will be the most expensive maintenance shed for a three man crew in Marin County's history. 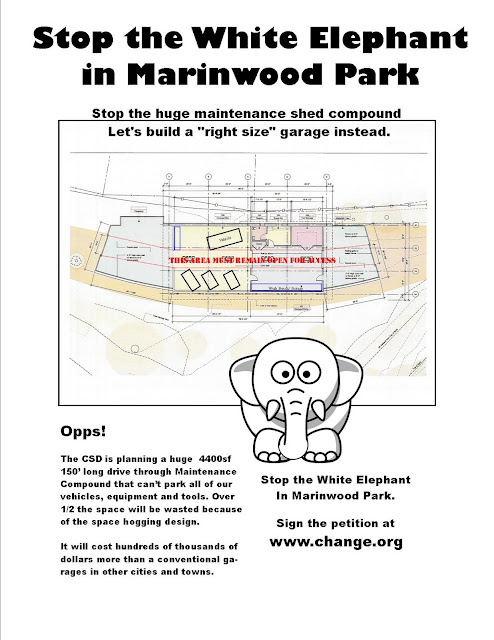 Posted by Save Marinwood at 9:05 AM No comments:

Trailer park millionaires: how to get rich on housing for the poor

Trailer park millionaires: how to get rich on housing for the poor

Some of the richest people in the US, including billionaires Warren Buffett and Sam Zell, have made millions from trailer parks at the expense of the country's poorest people. Seeing their success, ordinary people from across the country are now trying to follow in their footsteps and become trailer park millionaires. The Guardian went to Orlando to learn the tricks of the trade from Frank Rolfe, the self-appointed dean of Mobile Home University, as he led would-be investors around a trailer park for sex offenders.

Kansas offers incentives to lure people back to the plains


The Great Plains have been losing population since the Dust Bowl in the 1930s. NewsHour travels to Kansas to find out about a state plan that offers incentives to attract new residents to Rural Opportunity Zones. Will deals on student loan reimbursement and state income taxes bring people to rural Kansas counties?
Posted by Save Marinwood at 12:00 AM No comments:

What is hate speech?

New regional taxes for Affordable Housing. MTC is after your wallet.


1. Lower voter threshold to 55% from 66% for infrastructure and affordable housing tax measures
2.Redevelopment agencies that use Tax increment financing. In other words, they redevelop the area and then tax everyone for the privilege of having their neighborhood destroyed.
3.New "Affordable Housing Authorities" that issue 45 year bonds without voter approval. "Capture" equity increase from real estate.
Nice little package of benefits for the affordable housing industry.
July 18, 2018 Outrageous request for more taxation to building so called affordable housing for people making up to $120,000 where the average household income is $89k. Middle class retirees and moderate income families will be force to subsidize WEALTHIER families that earn more than them. The "affordable housing" development industry is pushing hard to socialize housing costs to provide them funds to build. Does anyone stop and consider how dumb it is to do this? Tax the poor so the middle class can have more?
Posted by Save Marinwood at 12:00 PM No comments:

Why Fake News shouldnt be regulated

Posted by Save Marinwood at 6:57 AM No comments:

Posted by Save Marinwood at 9:21 PM No comments:

The tide is turning — cities are battling for local control

Marin Voice: The tide is turning — cities are battling for local control

Have you heard about Brisbane in San Mateo County, population 4,700, where legislators are threatening new regulations if local voters don’t change their General Plan? Why should you care? Because, if legislative trends continue, local voters’ wishes everywhere will be trampled.

Brisbane residents — like any community with history, character, and pride — have resisted, based on concerns about toxicity, traffic, sea-level rise and infrastructure like water and schools’ capacity. The City Council recently voted 4-1 to amend its General Plan to favor UPC but agreed to put it to a vote in this fall’s election.

You might think a public vote would be the end of the story. But Brisbane’s Sen. Jerry Hill and Sen. Scott Wiener disagree. Wiener, author of SB 827 and SB 828, is also the force behind SB 35, one of 14 bills passed in 2017 that makes it easier for developers to build high-density housing, while dismantling local regulations of the General Plan, Housing Element, Design Review and California Environmental Quality Act requirements.

If voters reject the amendment, Wiener and Hill threaten to introduce legislation that would force Brisbane to comply.

This push to reduce local control is nothing new. In 1989, the U.S. Department of Housing and Urban Development published the Not-In-My-Backyard (NIMBY) Report that contended local planning and zoning control were an impediment to affordable housing and private, for-profit development. Recently, big business, developers and big banking have backed a national Yes-In-My-Backyard (YIMBY) campaign.


UPC, taking a page from the YIMBY playbook, writes, “The region is in a housing crisis and every jurisdiction, including Brisbane, has an obligation to help meet the region’s housing needs.”

Really? Why is tiny Brisbane responsible? READ THE FULL ARTICLE
Posted by Save Marinwood at 1:04 PM No comments:

How to tell the difference between a narcissist, pychopath and sociopath 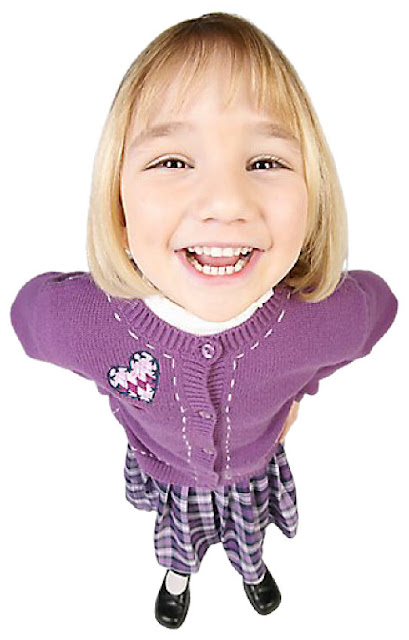 Who needs Free Speech?
The Marinwood CSD has asserted themselves as the “official truth” about the 6000 sf Maintenance Shed Compound  that is being proposed for Marinwood Park.   They call critics “liars”.
We encourage you to seek out information for yourselves.  Do you really want this huge project in your park?
Some people don’t want you to know.  You can find out more from videos and public comments on “unofficial” websites and your neighbors.
Don’t let the censors take your park away.
“Stop the White Elephant
In Marinwood Park” 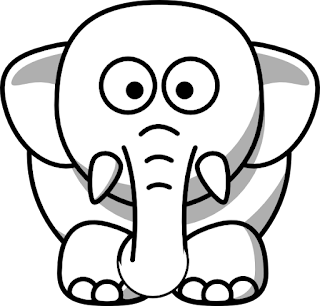 
P.S.  The Marinwood CSD and other bullies are removing public notices about the project in order to minimize public knowledge about the project. There own documents are highly deceptive and they don't want people to know the size, cost and impact of the project on Marinwood Park.  It is almost laughable if it wasn't such a sad commentary on the CSD.  Please tell your neighbors.

Posted by Save Marinwood at 8:22 PM No comments: