The lessons learned from this video can be applied to Plan Bay Area and most especially Marinwood/Lucas Valley. The "generosity" of politicians will be paid on the backs of the middle class communities everywhere in Marin. The non-profit developments pay virtually no taxes to fund schools, police and fire. The neighboring tax payers must pay this burden. Rich developers and banks make millions. Very low income people get cramped apartments next to the freeway. The community gets exploited.
Posted by Save Marinwood at 6:00 PM No comments:

Dirty Job's Mike Rowe on the high cost of College

Posted by Save Marinwood at 5:00 PM No comments:

Posted by Save Marinwood at 4:00 PM No comments:

Email ThisBlogThis!Share to TwitterShare to FacebookShare to Pinterest
Labels: A21, economics, environment, Politics

Posted by Save Marinwood at 4:30 PM No comments:

Posted by Save Marinwood at 4:02 PM No comments:

Westchester County HUD deal and its effects-a warning for Marin. 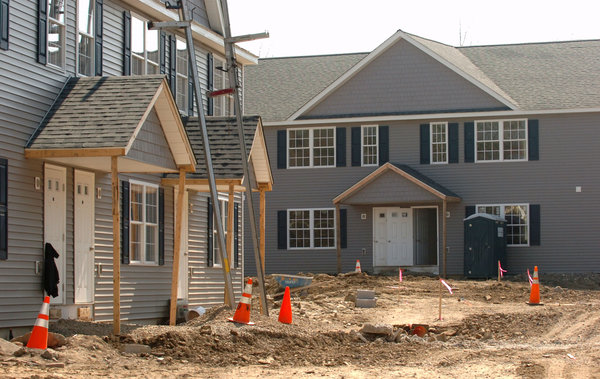 
Lower-cost homes under construction in Rye, N.Y., last month.
Westchester is ahead of schedule in building 750 of the homes.

WHITE PLAINS — When Westchester County agreed to a far-reaching affordable housing agreement in 2009, federal officials heralded a new era for desegregation in communities around the country.

“This is consistent with the president’s desire to see a fully integrated society,” said Ron Sims, then the deputy secretary with the Department of Housing and Urban Development. “Until now, we tended to lay dormant. This is historic, because we are going to hold people’s feet to the fire.”

But rather than signaling a transformative moment, the settlement has led to an often rancorous tug of war, complicated by politics and real estate prices in one of the nation’s wealthiest areas, where the residents include notables like Bill and Hillary Rodham Clinton and Gov. Andrew M. Cuomo. The result is raising questions about Westchester’s commitment to complying with the agreement and just what a “fully integrated society” might mean, cost and look like in a largely developed suburban county.

Westchester is ahead of schedule in building the 750 affordable residences required by the settlement, but there are complaints that rather than representing true economic and racial integration, many of the housing units are far from the heart of affluent white communities. Westchester and HUD remain at a testy impasse over the county’s responsibility to ensure that its towns and villages end exclusionary zoning practices.
Five times Westchester has filed a report, required by the agreement, analyzing the obstacles to affordable housing in the county and presenting strategies for overcoming them. Five times the federal government has rejected it as inadequate.

The Westchester County executive, Rob Astorino, has called for HUD to release $7 million it has withheld from the county because of what it calls a lack of compliance.
Mr. Astorino took aim at the department after a court decision in March. A magistrate judge ruled that Mr. Astorino did not violate the agreement when he vetoed a bill that required landlords to accept government vouchers as rental payments.

“This is a major win not just for the county but for the nation,” Mr. Astorino, a Republican, said at a news conference. “We took a very principled stand against an unwarranted invasion by HUD and the federal government, and the county won.”
His critics, including some in the Democratic-controlled county legislature and at the Anti-Discrimination Center, the nonprofit group whose lawsuit led to the agreement, said Mr. Astorino was mischaracterizing a mixed ruling and continuing to flout the terms of the deal.

For decades, the federal government has steered clear of concerted efforts to integrate communities by race and income. And the fight in Westchester, along with similar efforts in places like Houston and Marin County, Calif., is being watched as a test of how far the government will go in encouraging residential integration.

The case began with a 2006 lawsuit. The Anti-Discrimination Center alleged that Westchester had lied when, while applying for federal housing money, it claimed to have complied with fair housing mandates.

After a federal judge ruled that the county had “utterly failed” to meet its obligations, it agreed to the settlement. The deal required the county to spend $51.6 million to build 750 units of affordable housing in 31 overwhelmingly white communities within seven years, and to market those units to nonwhites aggressively. The Westchester settlement includes working families solidly in the middle class, with most rental units available to a family of four earning up to 65 percent of the area’s median income, or $70,135.

The settlement also required the county to “use all available means as appropriate” to promote nondiscriminatory housing, including pushing towns and villages to alter zoning rules that discouraged the construction of apartments. Pound Ridge, for example, covers 23.5 square miles, but no land is zoned for multifamily use.

Mr. Astorino, who defeated Andrew J. Spano, the Democratic executive who agreed to the settlement, said that 206 units had been approved and that 196 of those had financing in place, almost double what was expected by this time.

“If the federal government looks at it some way else, you’ll have to ask them,” Mr. Astorino said in an interview. “But as far as I’m concerned, this is a pretty clear-cut, seven-year contract we have to fulfill in building 750 units in 31 eligible communities. I don’t think anyone can deny we’re having a lot of success.”

Mr. Astorino said that rather than being a bastion of privilege, Westchester was the fourth most diverse county in the state, and that market forces determined who could afford to live in affluent places like Bronxville, Rye and Scarsdale.

But his critics say the overall diversity masks a deeply segregated landscape in which minorities are clustered in a few cities — like Mount Vernon, New Rochelle, Peekskill and Yonkers — while, according to the 2010 census, more than half the towns and villages are less than 5 percent black, and nearly half are less than 10 percent Hispanic. (As a whole, the county’s population is 15 percent black and 22 percent Hispanic.)

James E. Johnson, who was chosen by the government to monitor Westchester’s performance, offered praise and criticism. He noted progress on the number of units being built and a mixed record on overall compliance, but said Mr. Astorino’s public comments were “not evidence of a program of support for the settlement, or fair housing, or integration.”

The monitor and HUD had argued that Mr. Astorino violated the settlement when he vetoed the bill, which would have prohibited landlords from discriminating against tenants who receive housing subsidies. But the magistrate ruled that while the deal required the county executive to promote such legislation, which Mr. Spano had done, it did not say the executive had to sign it.

Kenneth W. Jenkins, the chairman of the Board of Legislators, said Mr. Astorino’s focus on the number of units built distorted the essence of the settlement.
“This is not about 750 units,” he said, emphasizing that the more important goal was to establish a long-term framework for integrated, affordable housing. “There’s no race to build 750 units.”

Craig Gurian, executive director of the group that sued the county, said much of the housing that had been approved or proposed was adjacent to low-income communities in neighboring towns or otherwise isolated from the rest of the wealthier community.
The proposal for Chappaqua, home of the Clintons, calls for what would be the tallest building in the town, dropped into a no-man’s land between railroad tracks, a highway and a bridge. New housing completed in Rye hugs the border of largely minority Port Chester, across two busy highways from the rest of Rye. Forty-six units scheduled for Larchmont sit in a virtually unpopulated block behind a strip mall, squeezed in against railroad tracks and Interstate 95.

Mr. Gurian faulted not only Mr. Astorino, but also HUD and the monitor.

“Unfortunately,” he said, “they’re failing entirely in the face of two and a half years of clear, pervasive, across-the-board resistance, and it’s really a tragic loss of the promise of the consent decree to make change.”

Still, some local officials and residents say many factors complicate compliance, like high land costs, the lack of available land in densely populated southern Westchester, the lack of sewers and the restrictions on building in the New York City watershed in northern Westchester.

Mr. Astorino’s supporters also say that the county already has some of the nation’s highest real estate taxes, and that it is essential to comply with the ruling in a way that is both fair and affordable.

Mayor Douglas French of Rye said his community had no choice but to build where land was affordable. In Scarsdale, Mayor Miriam Levitt Flisser said her village was taking steps to comply. It is one of six municipalities cited by the monitor as having adopted new land-use rules. But she said Westchester was no more discriminatory than, say, Manhattan, with its swaths of wealth and poverty.

“In a country as large as ours, I think it’s very difficult for the federal government to micromanage growth in an exceedingly small municipality with 17,000 residents and 5,000 families,” she said.

Michael Allen, a lawyer in Washington who worked on the original suit, said HUD was showing a vigor not seen in decades on fair housing issues. He said Westchester was viewed as a test case for the government’s resolve.

“This is not big brother imposing its will arbitrarily on innocent Westchester County,” he said. “It’s just law enforcement. And if going down this road conveys to municipalities that there are obligations that come along with getting federal funds, so much the better.”

A version of this article appears in print on April 4, 2012, on page A18 of the New York edition with the headline: In Westchester County, Doubts About Commitment to Housing Deal.

Readers shared their thoughts on this article.

Posted by Save Marinwood at 7:08 AM No comments: