Who Belongs in a City

Underneath every shiny new megacity, there's often a story of communities displaced. In this moving, poetic talk, OluTimehin Adegbeye details how government land grabs are destroying the lives of thousands who live in the coastal communities of Lagos, Nigeria, to make way for a "new Dubai." She compels us to hold our governments and ourselves accountable for keeping our cities safe for everyone. "The only cities worth building, indeed the only futures worth dreaming of, are those that include all of us, no matter who we are or how we make homes for ourselves," she says.
Posted by Save Marinwood at 12:00 AM No comments:

Email ThisBlogThis!Share to TwitterShare to FacebookShare to Pinterest
Labels: displacement 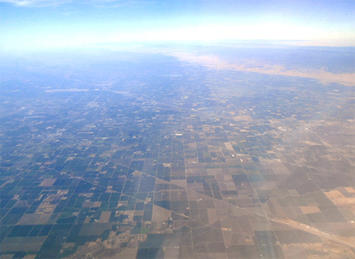 This decade has witnessed an unprecedented expansion of the Greater San Francisco Bay Area (the San Jose-San Francisco combined statistical area or CSA), with the addition of three Central Valley metropolitan areas, Stockton, Modesto and Merced. Over the same period, there has been both a drop in the population growth rate and a shift of growth to the Central Valley exurban metropolitan areas. This expansion was partly justified by the increase in “extreme commutes” – one way work trips of 60 minutes or more.This increased the Bay Area’s already abundant land supply, particularly with the addition of Modesto and Merced. The Central Valley Exurbs added a plain nearly 100 miles north to south and more than 40 miles east to west.
It is notable that the Coast Mountain range did not stop the urban expansion of the Bay Area. Now, nearly 1.6 million Bay Area CSA residents live in the Central Valley exurbs (Figure 1). Much of the growth has to do with the better housing affordability there. 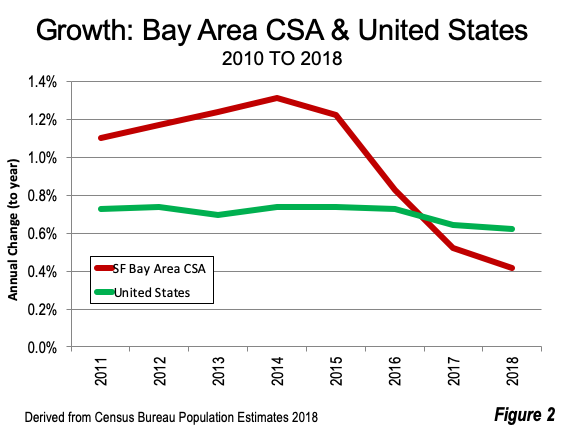 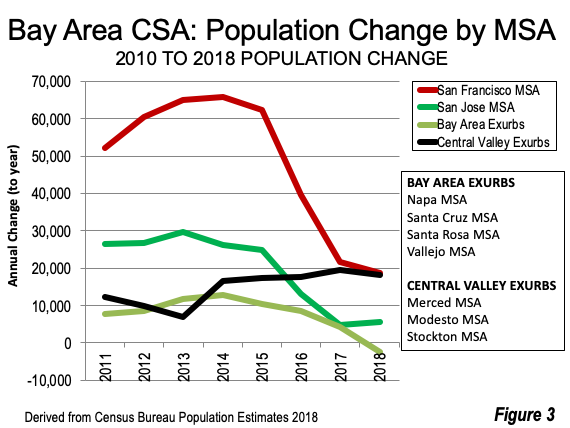 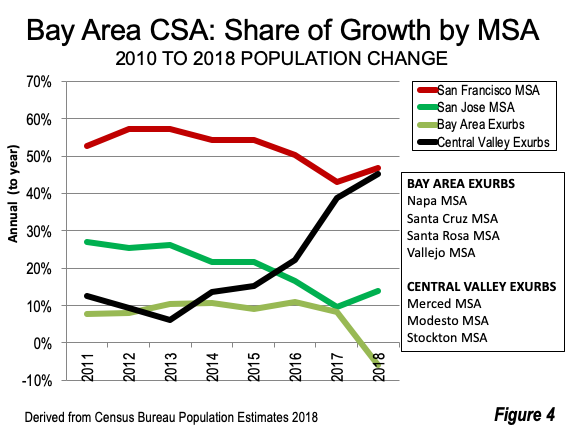 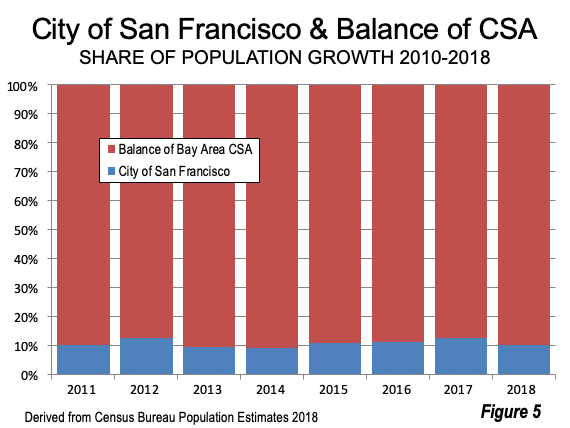 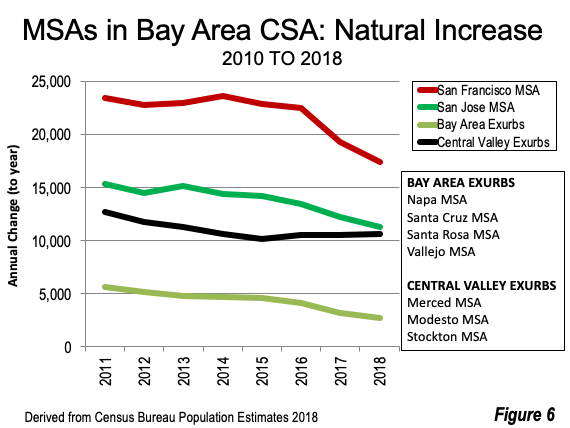 The natural population increase is declining across the nation, due to falling fertility rates. The recent collapse in the Bay Area CSA in domestic outmigration is also a factor. IRS data shows that California’s net domestic outmigration tends to be strongest among households from 26 to 44 years old, ages that produce most of the children. The lowest outmigration rate is among those aged 65 and over.
Meanwhile, Marin County has the oldest median age in the CSA, at 47.2 years. More than nine years older than the national median (38.4). The youngest ages are in the Central Valley exurbs. Merced County has a median age of 32.1, while San Joaquin and Stanislaus counties are at 34.5.
Domestic Migration Collapses
The Bay Area CSA gained an average of 9000 domestic migrants in 2010 – 2015. However, domestic migration collapsed to an annual net loss of 39,000 in 2015 – 2018, reaching a loss of nearly 50,000 in 2017 – 2018 (Figure 7). Net domestic migration dropped strongly in both the San Francisco and San Jose metropolitan areas. The Bay Area CSA net domestic migration loss in 2010 – 2018 was 71,000.
The decline in net domestic migration was less severe in the adjacent exurbs. The Central Valley exurbs experienced positive domestic migration, reversing the early losses that had been precipitated by the devastating effects of the Great Recession (Figure 7). 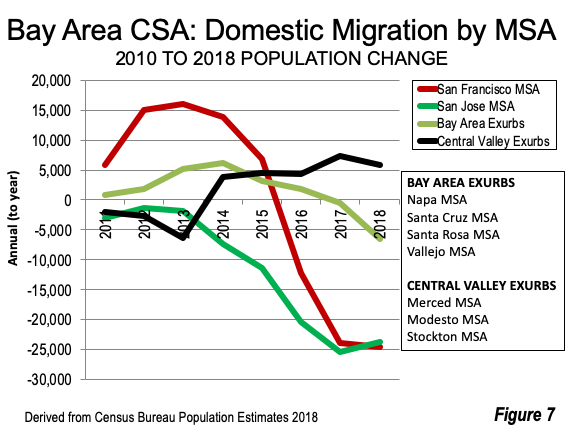 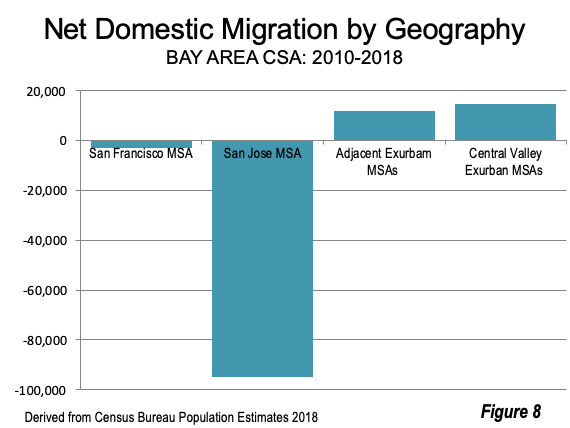 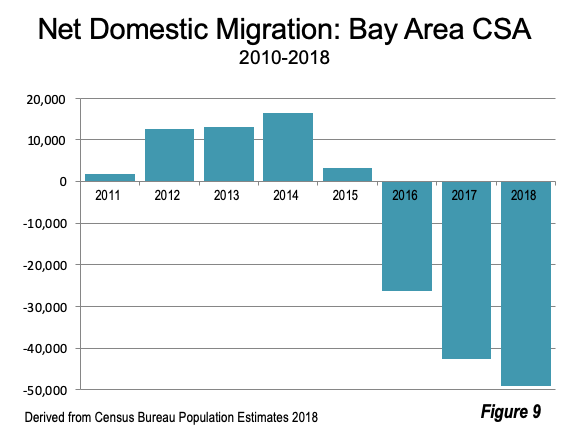 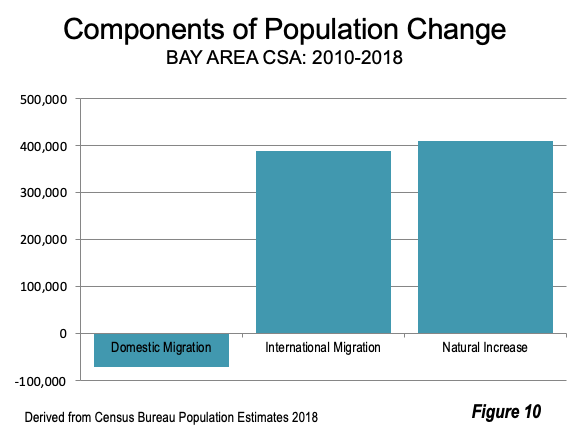 The Bay Area CSA has seen a significant reduction in its pattern of growth as the decade has proceeded. The result is that growth has been largely stunted in the San Francisco, San Jose and adjacent metropolitan areas, with growth increasing only in the Central Valley exurbs. The Bay Area may remain the tech capital of the world, people are moving away, despite the continued economic growth.
Photograph: Central Valley Bay Area Exurbs: From the Stockton metropolitan area, looking south toward the Modesto and Merced metropolitan areas (by author).
Wendell Cox is principal of Demographia, an international public policy and demographics firm. He is a Senior Fellow of the Center for Opportunity Urbanism (US), Senior Fellow for Housing Affordability and Municipal Policy for the Frontier Centre for Public Policy (Canada), and a member of the Board of Advisors of the Center for Demographics and Policy at Chapman University (California). He is co-author of the "Demographia International Housing Affordability Survey" and author of "Demographia World Urban Areas" and "War on the Dream: How Anti-Sprawl Policy Threatens the Quality of Life." He was appointed by Mayor Tom Bradley to three terms on the Los Angeles County Transportation Commission, where he served with the leading city and county leadership as the only non-elected member. Speaker of the House of Representatives appointed him to the Amtrak Reform Council. He served as a visiting professor at the Conservatoire National des Arts et Metiers, a national university in Paris.

Posted by Save Marinwood at 9:50 AM No comments:

Posted by Save Marinwood at 11:21 AM No comments:

FABLE: THE WOLF AND THE LION

THE WOLF AND THE LION

A WOLF had stolen a Lamb and Was carrying it off to his lair to eat it. But his plans were very much changed when he met a lion, who, without making any excuses, took the Lamb away from him.
The Wolf made off to a safe distance, and then said in a much injured tone
"You have no right to take my property like that!"

The Lion looked back, but as the Wolf was too far away to be taught a lesson without too much inconvenience, he said:
"Your property? Did you buy it, or did the Shepherd make you a gift of it? Pray tell me, how did you get it?"
What is evil won is evil lost.
Posted by Save Marinwood at 7:13 AM No comments: