Posted by Save Marinwood at 8:50 PM No comments:

ARISTOCRACY OF TALENT: SOCIAL MOBILITY IS THE SILVER LINING TO AMERICA’S INEQUALITY CRISIS

ARISTOCRACY OF TALENT: SOCIAL MOBILITY IS THE SILVER LINING TO AMERICA’S INEQUALITY CRISIS

Oh, Good, It’s 2016 and We’re Arguing About Whether Marxism Works

Every Marxist government in history has been a repressive nightmare. Marxists — aside from the ones who defend the remaining Marxist regimes — consider this a strange coincidence that has no bearing on Marxist ideology. I recently pointed this out, in light of the resurgence of Marxist thought among some left-wing intellectual circles. In an essay inIn These Times, Tyler Zimmer writes what he purports to be a response, but that in fact confirms my point for me.

Reminder: Liberalism Is Working, and Marxism Has Always Failed6 Years After Obamacare’s Passage, Haters Refuse to Accept RealityDonald Trump Versus the Republican Brain
The problem with Marxism, I argue, lies in its class-based model of economic rights. Liberalism believes in political rights for everybody, regardless of the content of their ideas. Marxists believe political rights belong only to those arguing on behalf of the oppressed — i.e., people who agree with Marxists.
Zimmer begins by insisting that self-described Marxist regimes such as the Soviet Union, Maoist China, Cuba, North Korea, etc., all of whose leaders were immersed in Marxist thought, were not real Marxists at all. (Zimmer: “[T]hese authoritarian monstrosities had virtually nothing to do with [what] Marx himself said or did.”)
Zimmer proceeds to explain why the liberal idea that everybody should enjoy the same right to express their political idea is a failure, and lays out the Marxist concept of what free speech should really mean:

Marxists value free speech because they are committed to building a society where all can decide matters of public concern democratically, as genuine equals. Thus, the Marxist has a consistent way of explaining why speech that aims to dominate or marginalize others should be challenged rather than protected: it is contrary to the very values animating our commitment to free speech in the first place. …
This explains why, to quote Jelani Cobb, “the freedom to offend the powerful is not equivalent to the freedom to bully the relatively disempowered.” It also provides a principled, consistent basis for opposing and disrupting the public acts of openly racist organizations that seek to subordinate, harm, scapegoat or marginalize others. …
[T]he (socialist) goal of cooperating and governing public life together as full equals gives us a principled criterion for deciding which forms of expression deserve protection and which don’t.

Zimmer is articulating the standard left-wing critique of political liberalism, and all illiberal left-wing ideologies, Marxist and otherwise, follow the same basic structure. These critiques reject the liberal notion of free speech as a positive good enjoyed by all citizens. They categorize political ideas as being made on behalf of either the oppressor class or the oppressed class. (Traditional Marxism defines these classes in economic terms; more modern variants replace or add race and gender identities.) From that premise, they proceed to their conclusion that political advocacy on behalf of the oppressed enhances freedom, and political advocacy on behalf of the oppressor diminishes it.
It does not take much imagination to draw a link between this idea and the Gulag. The gap between Marxist political theory and the observed behavior of Marxist regimes is tissue-thin. Their theory of free speech gives license to any party identifying itself as the authentic representative of the oppressed to shut down all opposition (which, by definition, opposes the rights of the oppressed). When Marxists reserve for themselves the right to decide “which forms of expression deserve protection and which don’t,” the result of the deliberation is perfectly obvious.
In the contemporary United States, these ideas are confined by the fact that only in certain communities (like college campuses) does the illiberal left have the power to implement its vision, and even there it is constrained by the U.S. Constitution. If illiberal ideas were to gain more power, the scale of their abuses would widen.
Posted by Save Marinwood at 12:00 AM No comments:

Late yesterday afternoon, The Marin Post received the following email from Marin County Supervisor Kate Sears, commenting on my recent blogs in the Marin Post (All the Supervisor's Men, The Devil Made Me Do It, and Elections Are Not Only About Issues).

Your coverage of my poll is anything but fair. I assume that's because you did not hear the poll yourself. Contrary to your reporting, the poll did not change the questions depending on answers. It also did not talk about Susan Kirsch's campaign taking money from the Koch brothers.

The 21 minute poll asked, as part of a much broader question, whether it bothered voters if they knew: "Her organization, Citizen Marin, has worked with organizations affiliated with the Koch brothers".  Read the Story in the Marin Post HERE

Editor's Note: As a member of Citizen Marin,  I find this allegation of Koch Brothers money laughable.  It is almost a funny as some of the allegations coming from the wacky fringe of the  housing activists.  It really shows how desperate Kate Sears is to get re-elected.

Monsanto’s Roundup—Most Popular Weed Killer in US— ‘Probably’ Causes Cancer, WHO Report Says (and it is being used in Marinwood CSD Parks, Playgrounds and Open Space)

Traces of the weed killer can also be found in food, water and in the air after it has been sprayed, according to the WHO report. In fact, according to a different study from the U.S. Geological Survey which focused on Mississippi’s highly fertile Delta agricultural region, the herbicide was present in 75 percent of air and rainfall test samples.
The WHO report focuses on industrial use of glyphosate. Home gardeners do not appear to be at risk. “I don’t think home use is the issue,” Kate Guyton of IARC told the Associated Press. “It’s agricultural use that will have the biggest impact. For the moment, it’s just something for people to be conscious of.”
According to Ken Cook, president and co-founder of Environmental Working Group said, “The widespread adoption of GMO corn and soybeans has led to an explosion in the use of glyphosate—a main ingredient in Monsanto’s Roundup and Dow’s Enlist Duo. Consumers have the right to know how their food is grown and whether their food dollars are driving up the use of a probable carcinogen.”
Monsanto has cried foul following the release of the report. “We don’t know how IARC could reach a conclusion that is such a dramatic departure from the conclusion reached by all regulatory agencies around the globe,” said Philip Miller, Monsanto’s vice-president of global regulatory affairs in a statement.
Monsanto is the world’s largest seed company. As Alexis Baden-Mayer of the Organic Consumers Association pointed out, the corporation invented the herbicide glyphosate and brought it to market under the trade name Roundup in 1974, after DDT was banned. The use of Roundup surged in the late 1990s thanks to Monsanto’s ingenious marketing strategy of genetically engineering (GE) seeds to grow food crops that could tolerate high doses of Roundup. With the introduction of these new GE seeds, farmers could now easily control weeds on their corn, soy, cotton, canola, sugar beets and alfalfa crops—crops that thrived while the weeds around them were wiped out by Roundup, Baden-Mayer wrote.
Besides cancer, glyphosate has since been linked to a whole slew of health issues including Parkinson’s disease and fatal kidney disease. Concerns about glyphosate in foods led to Vermont’s historic no-strings-attached billrequiring labeling of GE foods last May, a first for the nation.
The U.S. government considers the herbicide safe for agricultural use, neglecting concerns from organic farmers and other growers as well as the full range of impacts associated with these GMO herbicide-tolerant crops. As Reuters noted in 2013, Monsanto “requested and received approval from the U.S. Environmental Protection Agency for increased tolerance levels for glyphosate.” Since the release of the WHO report, the U.S. EPA said it would consider the French agency’s evaluation.

Editor's Note: In a recent post  I published the video of the February 2016 Marinwood CSD meeting where they approved the "Integrated Pest Management" Plan (IPM) which allows the use of pesticides like Roundup (aka. glyphosate) in our Parks, Playgrounds and Open Space.  Residents of Upper Lucas Valley have reported pesticide use by Marinwood CSD maintenance contractors in Open Space. Although they are required to post before spraying,  this did not occur.  Below is the CSD meeting video where the IPM was approved.  The Board of Supervisors recently approved a similar plan.  Damon Connolly was the only Supervisor who voted no.  In February 2016 the Marinwood CSD, the IPM was approved unanimously.

Is this the same Richard Dovere of C2 Beta Holdings that is the partner with Marinwood?


The Marinwood CSD signed a contract with Richard Dovere of C2 Beta Holdings.  Is this the same man?  His company was formed just six months ago and it appears he has had multiple businesses since 2011 when this video was made.  Quite an achievement for a 29 year old man.

The real concern is with his company with whom we have a twenty five year commitment.  We could have done business with the established solar companies yet for some odd reason, Sol-Ed, won the contract.  It is owned by David Kunhardt, a company run out a cubicle in downtown San Rafael with NO SOLAR installations experience when it won the contract.  Strange isn't it?

Another key player is Cyane Dandridge, a former Marinwood CSD Director who owns SEI and runs the MSEL Environmental High School at Terra Linda High. She secured the exclusive consulting contract for solar engineering for Marinwood without competitive bids before resigning in 2012. Prior to that she was on the committee to approve eight sites for affordable housing in Marinwood Lucas Valley.   We now have a stunning 83% of all the very low and low income housing units for unincorporated Marin.

Posted by Save Marinwood at 11:08 AM No comments:

This Jersey Mayor used his position to secure a Solar Deal and got caught.

Posted by Save Marinwood at 11:08 AM No comments:

Editor's Note: I have taped Marinwood CSD meetings for years.  In the past, I did not publish them because I thought they were too embarrassing.  The petty arguments, power plays and outright unethical behavior were better left unseen.  I was naive.  It turns out that making this behavior public is EXACTLY what is needed to curtail the abuse.

I am sorry to say, that the current CSD directors, while in some ways is MUCH BETTER than past boards, a few behave as authoritarian rulers instead of democratic elected representatives of the people.  Video can level the playing field.
Posted by Save Marinwood at 12:00 PM No comments:


When a planner tells you that urbanizing the Bay Area will REDUCE greenhouse gases and traffic, ask about his PROOF.

The simple fact is that the iconic city of "smart growth", Portland, Oregon has INCREASED traffic,  HIGHER housing prices and REDUCED mass transit use.

The Tax Trio, Kinsey, Rice and Sears are happy at Tax Time! 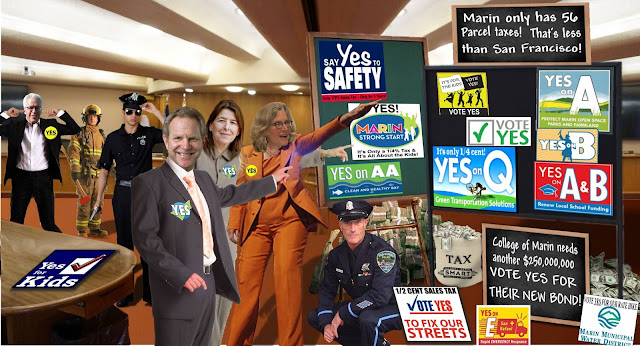 Posted by Save Marinwood at 8:02 PM No comments: