So glad this information about Agenda 21 policy ideas is getting out into the mainstream media. Plan Bay Area is part of the same master plan. It all seems very fringe but it is a real thing openly discussed in Europe and Australia and South America.
Posted by Save Marinwood at 12:00 PM No comments:

Email ThisBlogThis!Share to TwitterShare to FacebookShare to Pinterest
Labels: A21

Assemblyman Marc Levine explains why he is voting for MORE TAXES and FEES to raise funds to give to affordable housing developers.
He promised us that he is voting against SB35 but VOTED TO FUND IT through SB2 and SB3. When developers come to your neighborhood with large apartment buildings WITHOUT NOTICE, you can thank Marc Levine and the State Legislature
Posted by Save Marinwood at 12:00 AM No comments: 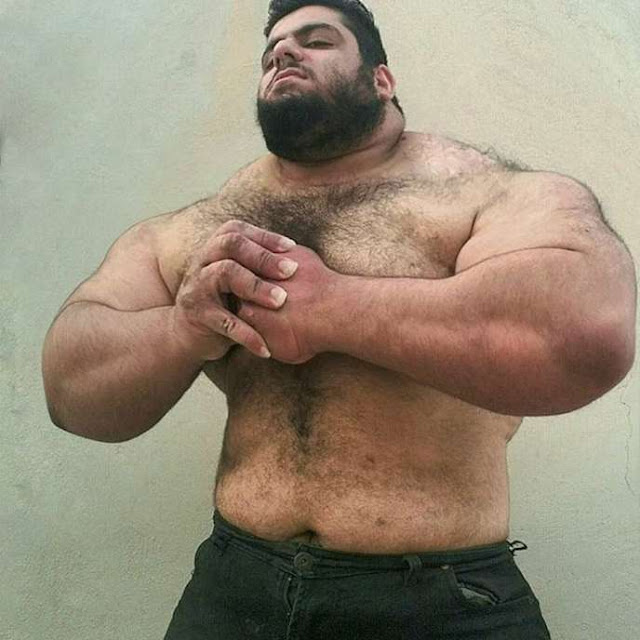 Posted by Save Marinwood at 10:13 AM No comments:

Thousand of Marin residents hoped that Assemblyman Marc Levine would represent Marin County instead of selling out to Affordable Housing lobbyist and pressure from Far Left Legislature in Sacramento.

Last night after a suspenseful hour,  Marc Levine cast the DECIDING VOTE for SB-2 that will tax most Real Estate Documents to generate revenue to give to developers.

It is now time to find a replacement in Sacramento.  Marc Levine INCREASED OUR TAXES and helped open the floodgate of development in Marin.


SB35 passed the Senate and will likely be signed into law.  It gives developers "by-right approval to build housing.  This means that Marinwood will likely see eight new low income housing developments in the next five years.  It could DOUBLE our population without adding tax revenue.

Posted by Save Marinwood at 9:07 AM No comments:

A frustrated resident asks the Marinwood CSD to require a promise return messages from the public within a reasonable time. Eric Dreikosen, Marinwood CSD manager will not return calls or emails. He says that he only works for the Marinwood CSD board of directors (and not the public).  Why does the board allow this unprofessional behavior to continue?
Posted by Save Marinwood at 9:16 PM No comments:

At the September 12, 2017 Marinwood CSD meeting, the Miller family, friends and neighbors presented a request to the Marinwood CSD board to allow access to the slide area so their contractors so they could do landslide repairs.

The Millers will pay for the slide repair on Marinwood CSD property but because of Marinwood CSD's concerns about liabilities,  no agreement has been reached.   In just a few short weeks, rainy season will begin, yet the Marinwood CSD is unwilling to consider the Millers terms for repair.

This should concern EVERY Marinwood CSD citizen.  The Millers are in their 90s and in frail health. Apparently, Eric Dreikosen, is hoping for FEMA funds to repair the slide on CSD property BUT we have neither a commitment from FEMA and we have been denied by our insurance company.

If the Marinwood CSD repairs the landslide it will costs thousands of taxpayer funds. If they ignore the problem, it could cost millions in legal fees too.

What will happen if the slide comes down upon the Miller family home? We think it is both foolhardy and irresponsible to refuse to work with the Millers before rainy season.

Would YOU stand still while a landslide threatened your family home and 90 year old parents ?

0:19:39:00 Marinwood CSD talks about the issue after the family leaves the meeting.

P.S. Alan Miller has written for the Marin IJ for over thirty years.
Posted by Save Marinwood at 11:04 AM No comments: 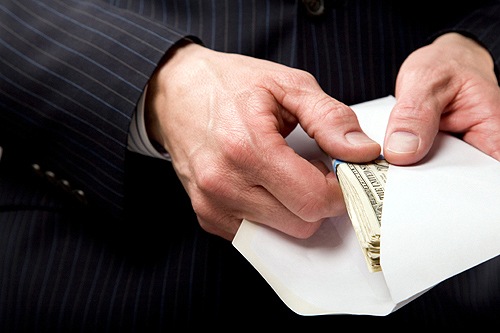 Public corruption, the FBI’s top criminal investigative priority, poses a fundamental threat to our national security and way of life. It can affect everything from how well our borders are secured and our neighborhoods protected to how verdicts are handed down in courts to how public infrastructure such as roads and schools are built. It also takes a significant toll on the public’s pocketbooks by siphoning off tax dollars—it is estimated that public corruption costs the U.S. government and the public billions of dollars each year. The FBI is uniquely situated to combat corruption, with the skills and capabilities to run complex undercover operations and surveillance.

See More at the FBI website  HERE
Posted by Save Marinwood at 2:44 PM No comments:

A warning about Marinwood Special District operating in Secrecy

Dick Spotswood, Marin IJ Columnist issues a warning about the dangers of Special Districts that operate without public oversight.  Marinwood Community Services District  has EXACTLY the kind of problems he refers to.

There is a meeting tonight, Sept 12, 2017 at Marinwood Community Center.

If we don't deal with Pensions, we will go broke.

Marinwood has a huge problem with pension liabilities.  Many of our veteran firefighters are taking early retirement on disability which entitles them to mostly a tax free income for life.  Sweet deal that we simply cannot afford.  Currently 2/3 of Marinwood Fire Department calls occur in neighboring San Rafael.  Shouldn't they pay 2/3 of the cost of our fire department?
Posted by Save Marinwood at 10:43 AM No comments:

Email ThisBlogThis!Share to TwitterShare to FacebookShare to Pinterest
Labels: pensions

Posted by Save Marinwood at 10:39 AM No comments: 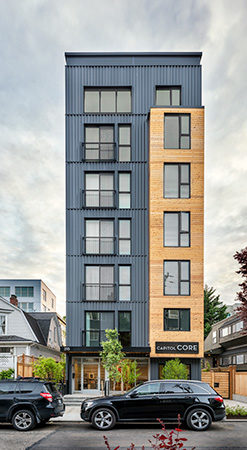 Taxes are going up if the Housing Package is approved. Will Levine support Marin? 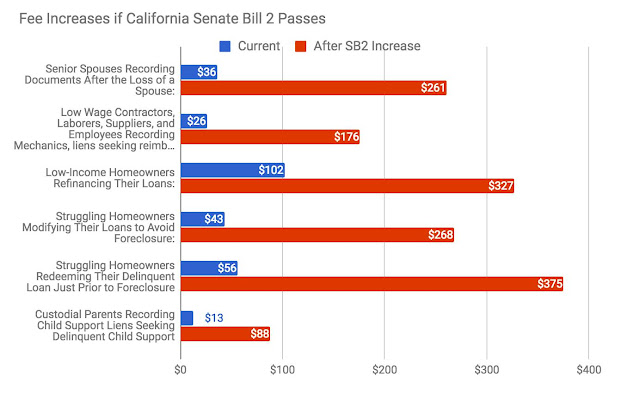 It's vital that you call or email Marc Levine's office to tell him to oppose SB2, SB3 and SB35 (the latter removes local control).
The impact of Senate Bill 2's innocuous $75 fee varies depending on the situation, but what appears to be a small rise is not small at all - it is very significant, and it hits those who can least afford it:
- Senior Spouses Recording Documents After the Loss of a Spouse: (Increase from $36 to $261)
- Low Wage Contractors, Laborers, Suppliers, and Employees Recording Mechanics Liens Seeking Reimbursement: (Increase from $26 to $176)
- Low-Income Homeowners Refinancing Their Loans: (Increase from $102 - $327)
- Struggling Homeowners Modifying Their Loans to Avoid Foreclosure: (Increase from $43 to $268)
- Struggling Homeowners Redeeming Their Delinquent Loan Just Prior to Foreclosure: (Increase from $56 to $375 or more)
- Custodial Parents Recording Child Support Liens Seeking Delinquent Child Support: (Increase from $13 to $88)
CONTACT:
Marc Levine's chief off staff, Minnie Santiallan:
Minnie.Santillan@asm.ca.gov
(916) 319-2010
Speak to any staff member and tell them Marc needs to vote against all three senate bills in the "housing package".

Posted by Save Marinwood at 10:08 AM No comments: 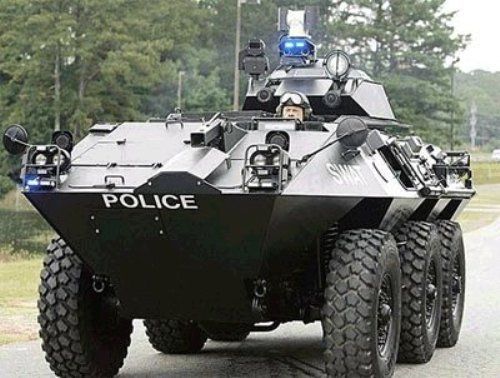 
In 2004, then-Sheriff Joe Arpaio’s SWAT team in Maricopa County, Ariz., raided a suburban home looking for illegal firearms.
The raid was a comedy of ineptitude.
The officers drove their armored vehicle into a parked car on the street. They changed into military-style uniforms on the lawn, leading a neighbor to conclude that they might have been amateur paintballers or even gang members. One of the many tear gas canisters police fired into the home apparently sparked a fire and set the home ablaze. A dog trying to flee the fire was scared back into the home, where it died.

Administration should learn from mistakes of Arpaio. Disastrous SWAT raids added proof that supplies not only unnecessary, but dangerous.

Instead of a cache of illegal weapons, the raid recovered an antique shotgun and a legally owned 9mm handgun, and officers made only one arrest — for a failure to appear in court over traffic violations.
It should go without saying that military weapons and tactics should be reserved for the most pressing circumstances. Yet the Trump administration is taking the country backward by again giving police departments access to the most dangerous artillery that is often unnecessary for local officers.
This week, Attorney General Jeff Sessions announced the reversal of an Obama-era rule that limits the transfer of certain military equipment to state and local police agencies.
The Pentagon’s 1033 program has provided military surplus equipment to state and local law enforcement agencies for a couple of decades. The Obama administration made a slight modification to the program by banning the transfer of some military equipment such as high-powered rifles, grenade launchers, bayonets, and some armored vehicles and camouflage uniforms.
Militarized law enforcement came under intense scrutiny in 2014 after Missouri teen Michael Brown was killed by police officer Darren Wilson. Police met protesters with tanks, tear gas and military-grade weapons, escalating an already tense situation. Observers could have easily been forgiven for mistaking the officers for occupying soldiers.
One photo from the protest quickly went viral and came to symbolize the oppressive, dangerous nature of overly militarized law enforcement. It showed multiple officers in full military gear, pointing riffles at a young, black male who was holding his hands in the air. The officers seem to be saying, do what we say or we’ll kill you.
That kind of military-tinged imagery is exactly what led some police chiefs to renounce their participation in the weapons program. Brandon del Pozo of Vermont’s Burlington Police Department said the equipment was starting to twist the perspectives of his officers:
“We have the resources to handle all but the most inconceivable public safety scenarios. Amassing a worst-case scenario arsenal of military equipment results in officers seeing everyday police work through a military lens. When I realized what a small role the military played in equipping our police, I concluded it was better to return the items.”
Del Pozo has his finger on a fundamental question: Can police departments be flooded with military weaponry and technology without blurring the distinction between law enforcement work and military occupation?
The history of SWAT teams, like the one in Maricopa County, provides an ominous answer.
SWAT teams originated as a response to demanding and dangerous circumstances such as hostage situations, civil unrest and active shooters. But as traditional law enforcement goals gave way to the incentives of the war on drugs, the mission of militarized police units began to creep. Rather than being reserved for emergency situations, the vast majority of SWAT raids today result from search warrants, usually for drugs.
Abuses of military tactics and equipment are inevitable. Police officers, like all people, respond to incentives.
We can, of course, imagine unlikely scenarios in which the police might need .50 caliber rifles, but there is a cost to turning responses to outlandish possibilities into policy prescriptions. Without adequate transparency, accountability and training, that cost will continue to be paid in lives. 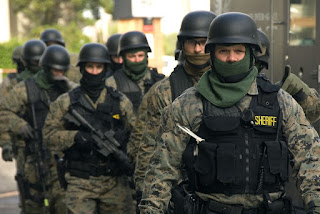