Posted by Save Marinwood at 6:09 PM No comments:

What is a "Hammerhead Turn"? How the truck will back up on the horseshoe pit. 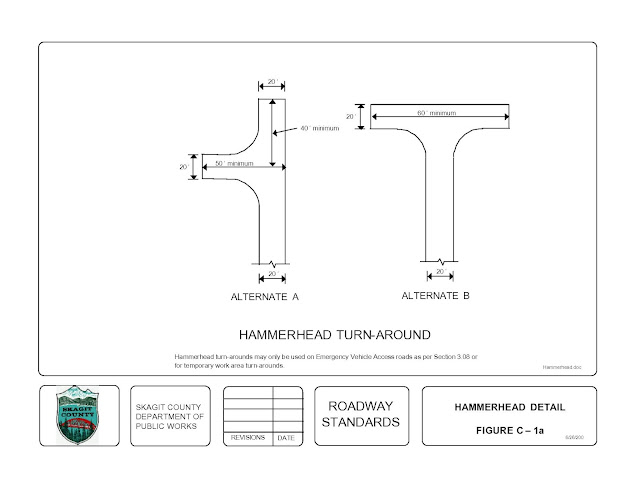 Here is an illustration of a "hammerhead turn" that the CSD claims will be done everyday in Marinwood Park. Many of us know this as a "three point" turn.  The trucks will back out of the Maintenance Facility and on to the horse shoe pit to turn around.

In addition Bill Hansell falsely represented this area as a "gravel surface" when in fact it is a soft sandy area to the planning commission and the county .

The Marinwood CSD has paid Bill Hansell an estimated $50k in architects fees before a single thing has been done to the site.  Hansell has a highly unusual fee contract that lacks performance standards and objectives.  It is a sweet deal for the architect but we taxpayers are stuck with the bill

Had we chosen a pre engineered building as specified in the initial plan, the CSD could install a an entire building for the cost of the architects fees so far.

The Marinwood CSD approved this awful fee arrangement and WILL NOT DISCUSS THE BUDGET FOR THE PROJECT.  We believe they fear public outrage if the cost is truly known.

Posted by Save Marinwood at 7:45 PM No comments:

After years of telling the community that the beloved horseshoe pit built in 2016 by community volunteers won't be impacted. Architect Bill Hansell tells the Marin Planning Commission that the area be used for a truck turnaround AND is covered in gravel. This is false as anyone familiar with the area knows. It is a soft, sandy area that was built over turf. Hansell further deceives the board by omitting the need for a trailer turn around in the same area. Eric Dreikosen, Marinwood CSD general manager stands silently while the deceptive comments are delivered. The public did not have a chance to rebut this false and misleading statement.
The Marin County Planning commission needs to look at ALL the facts and not allow decisions to rely on falsities. The Planning commission ignored THREE MAJOR VIOLATIONS of the Marin County General Plan. The project is DOUBLE the size necessary for efficient operations and will force the destruction of valuable park space.
Posted by Save Marinwood at 11:00 AM No comments: