Which are Worse: Train Salesmen or Cheap Car Salesmen?

Which are Worse: Train Salesmen or Cheap Car Salesmen?

Although car salesmen get accused of sleazy sales tactics the only ones I've encountered have been the utmost professionals. Train advocates however are a different matter.
Posted by Richard Hall , October 15, 2013 at 06:20 PM 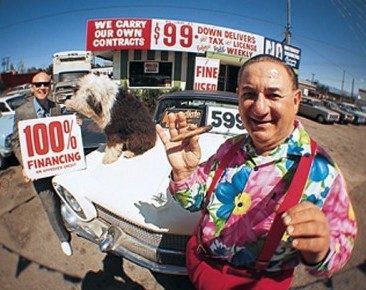 My respect for car salesman right now is at an all time high having dealt with the highly professional Jim Leavitt of San Rafael and the truly amazing Steve Dolowitz of Petaluma Honda, who sadly passed away at the age of 56 in 2006.  However SMART and its many advocates seem to be adopting the tactics akin to cheap car salesmen. You know the one - it's called the four square system.

The salesman writes down:
Then they work out which of the four elements you care about the most and before you know it the elements you fixated on are great and you're in the finance managers office signing away hundreds more than you needed to as the other elements have been twisted in the dealership's favor.

With SMART it worked like this. It was worked out that we the taxpaying voters of Marin and Sonoma cared deeply about reducing 101 congestion. Also being Marinites we liked the sound of anything that sounded sustainable and green, and what could possibly be greener than a train? Surely that's common sense. Who would ever question it?

Questioning the Unquestionable - is it Really Green?

But this is where the cheap sales-trick falls apart. If you dig deep enough, and it's nicely buried, you can work out the SMART trains' emissions. These are ultimately calculated based on "passenger mpg" and as with mpg the higher the number the better.

SMART is supposed to commence operations in late 2016. The locomotives are meant to have a lifespan of 30 years so this puts the midpoint of operational life at 2031.  Whitehouse legislation mandates that the average fuel economy of new cars in 2025, that's 6 years earlier, will be 54.5mpg (Source: the Whitehouse). Of course we need to adjust this downwards as:

i) It will take time for the existing vehicle fleet to be replaced. But the 2031 locomotive lifespan midpoint is 6 years beyond the Whitehouse mandate
ii) Advertised mpg for cars can be optimistic; the reality as we've all discovered comes in around 20% under (give or take)

If we then take the latest US DOT figures for commuting (not for all trips) then car ridership is 1.13 passengers per vehicle.  Again this is needlessly harsh, the US DOT really states that there are 1.67 passengers in a car, the number happens to be lower for commuting - but of course SMART won't be exclusively used by commuters. Many (most) trips are not commutes but school runs, shopping trips etc...

This lower 1.13 passengers per vehicle translates to 30.8mpg. Burning hydrocarbons can then be converted to CO2 emissions using a straightforward equation which at 30.8mpg works out at 183g per passenger mile.

SMART does 1.1mpg by it's own admission (source SMART, page 15, table 3). But to translate this into passenger miles there are a few other critical factors we need to account for ridership, deadhead miles and riders who actually switch from cars to transit.

Ridership
For ridership we could take the Dowling study, but even SMART's board and SMART themselves agree these aren't accurate. So let's throw these unrealistic, disputed figures out and base ridership on a near equivalent transit system.

The San Diego Coaster runs from Oceanside to San Diego 20 times a day. It has an average ridership of 144 passengers at any given time. It runs through suburban areas like Marin (perhaps a little more built up, let's give transit advocates the benefit of the doubt, once again).

The coaster serves the following communities:
By comparison SMART serves the following:
This translates to the Coaster serving 414% of SMART's population catchment. But this is unfair as the Coaster, unlike SMART, goes directly to the major employment area of downtown San Diego. Adding connections to any journey adds time and makes people more likely to drive. For instance most people will be able to drive from San Rafael to San Francisco in half the time it takes to take the train and the ferry. So we need to further discount - 40% seems fair.

So if we pro-rate Coaster's ridership of 144.8 passengers on average based on this same ratio SMART, and apply the 40% additional reduction as SMART does not serve a major employment center we arrive at SMART having an average of 20.5 riders.

Then there's what are called "deadhead miles". Trains do not magically appear at the beginning of each day at their alloted starting points. They must get to and from their depots before and after journeys. For SMART, a largely single track line this exercise is significantly more complex. So in the absence of SMART data we might assume deadhead miles represent 25% of miles travelled by the train.

Only Count Riders Switching to Transit

At this point the math is working out with the train achieving 16.9mpg compared to cars at 30.8mpg (applying the most harsh considerations to the car to please transit advocates). But we really can't stop there. We can only really consider there to be a reduction (or so it is claimed) if this is based on riders who switched from using cars to using trains - we must discount those train riders who already took the bus.

We now have our two passenger mpg figures:
We then need to convert these to emissions by multiplying by passengers and miles travelled. We already arrived at a average passengers carried by SMART at 20.5. If we then say SMART runs 16 times a day, with passengers traveling half the line length on average - 19 miles - twice a day, and taking this over the 30 year lifespan of SMART we get 48.6m passenger miles.

This translates to the following - moving 20.5 people by train 16 times a day an average of 19 miles twice (return trip), on 260 weekdays a year for 30 years we reach the following emissions:

This means that SMART causes a 400% increase in emissions over cars. Even if we include existing transit riders who use SMART the figures don't come out in the train's favor:

Had we set out to spend our $1.2bn to reduce greenhouse gases we might instead have bought every 2 would be SMART train riders (who were not already using transit) a Tesla Model S, at taxpayer expense.  The result over 30 years is a massive reduction in emissions at a tiny fraction of the cost:

(Tesla's still create emissions back at the power station, they have an MPGe rating - mpg equivalent - of 110 MPGe, but this is the figure based on national emissions, it is likely better still in California where power is cleaner than the national average).

Running the same numbers with hybrid buses which I estimate to get 36.6mpg - superior to cars but inferior to Teslas - would also generate a substantial reduction in emissions.

Claiming SMART reduces congestion might have some merits but based on pro-rating the San Diego Coaster's ridership we arrive at 20.5 riders per train or 164 people taken off the roads (there are 8 trains each way morning and evening). With 1.13 passengers per car that's best case 145 cars removed from 101.

Highway 101 currently carries 188,000 cars per day past Freitas Parkway (source Nader Mansourian, City of San Rafael). Removing just 164 cars a day represents almost a rounding error - just 0.08% of the traffic. This is probably the traffic growth of 101 in just a matter of months. So spending $1.2bn to remove 164 cars from 101 represents $7.3m per car. I don't know about you but if someone offered me $7.3m I would concede commuting. I suspect there are many like me who'd do the same for a far lower amount.

Justifying SMART based on reducing 101 congestion at a cost of $7.3m per car is simply ludicrous.

Back to the Cheap Sales Talk

But now we return to our car dealer tactics. First they fixated us on congestion and greenhouse gases. There was also something about going from Cloverdale to Larkspur but let's ignore that broken promise also.

Now our advocates change their tune to a whole new justification - the train provides "mobility" which is "likely be worth hundreds of millions of dollars per year".

I would hazard that if "mobility" could be defined, and transit advocates seem to be making up the rules here as they go along, then a lot more mobility could be achieved for $1.2bn using something other than a train.

Updating the "I've Got a Bridge to Sell You" Story

At the turn of the 19th - 20th century a conman George C Parker sold the Brooklyn Bridge several times over to gullible tourists. Perhaps the story needs to be updated thanks to SMART. Instead of "I've got a bridge to sell you" it should be "I've got a train to sell you".

Advocates can't keep switching the conversation to some new argument every time an old argument breaks down. Either the train achieves what it was promised or we should reassess the situation.

What does this realistically mean for Marin and SMART? It means let them go as far as they can with the money they've got. But let's not pay $1 more than we've agreed to for a train to nowhere (OK so it might get to Larkspur now) that based on promises of reducing congestion and greenhouse gases either doesn't move the needle at all, or moves it completely the wrong way.

Let's not double down on a losing bet. And if we can walk away from the betting table and really use our money to do something sustainable that reduces emissions and congestion - like implementing more express hybrid buses, encouraging carpooling or fast-tracking legislation that allows "car chaining" that increases freeway capacity threefold - let's do that instead.

Posted by Save Marinwood at 5:18 PM