Marinwood, the next Daly City?


Little boxes on the hillside, Little boxes made of tickytacky
Little boxes on the hillside, little boxes all the same
There's a green one and a pink one and a blue one and a yellow one
And they're all made out of ticky tacky and they all look just the same.
I have nothing against Daly City.  I am sure the people who live there are quite happy to be close to transit hubs, shopping and employment opportunities close by.  Although the fog and the lack of trees and lawn, make it seem forbidding to this Marinwood resident I am certain that they find joys just like I do.
Our family chose to live in Marinwood-Lucas Valley, a  community with lawns, open space and friendly neighbors.  We could have just as easily chosen Daly City but our values for open space and community superceded the convenience that Daly City offers.  I am certain, that most Marinwood residents prefer our community to crowded urban conditions too.
Why then is Marinwood Priority Development Area being rezoned for high density housing against the will of the people by an unelected regional body ABAG and the Marin County Supervisors without our local community involvement?
Marinwood Plaza is only the first of many high density developments that may transform our community into "Daly City" north.  It may fundamentally transform everything we know and love about our community.
Speak up! Learn more about the Housing Element and their plans for our community.  Demand answers.  Talk with your neighbors.  Vote! 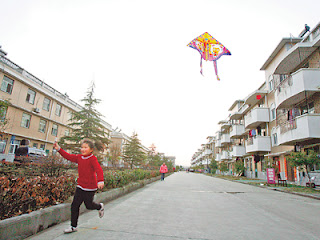 Can't happen here?  Where there is developer profits to be made...

Between 2005 to 2008, 400 peasant families were relocated to brand-new villas in Wuhan, China. Their former fields were turned into high-rise development, and eviction was payed with a 240-360 m2 three-story villa for each household. [no need to mention the tremendous amount of money earned by the developer in the operation, to afford paying such compensations]

In March 2010, 2 years later, it has been announced that their new homes are to be demolished again. Not because of derelict state at all; spring/summer 2010 season this year just came with the planning of a bunch of new more lucrative high-rise blossoming on-site; quite trendy. Adjacent land price rates at 160 euro/m2, while built apartments are being sold at 600 euro/m2.
Posted by Save Marinwood at 12:09 PM