The world's worst traffic: can Jakarta find an alternative to the car?

The average Jakartan spends 10 years of their life in traffic, wrote novelist Seno Gumira Ajidarma, and you don’t have to spend long in the Indonesian capital to believe it.
Three and a half million people a day commute into this hot and humid city from the wider metropolitan area of Greater Jakarta and many come by car, attracted by the status and the air-conditioning. Their cars, though, are motionless in macet(gridlock) during most of the 5am to 8am and 5pm to 8pm rush hours, and for much of the day.
Jakarta was named the world city with the worst traffic in one index last year based on satellite navigation data, which found the average driver starting and stopping more than 33,000 times in a year. An estimated 70% of the city’s air pollution comes from vehicles.
It typically takes two hours to drive 25 miles to the centre from Bogor, the largest of the satellite cities, where many office workers live. A bad journey can take three hours. As cars idle in endless queues, scooters slalom past, missing by inches. It seems there are often more passengers on the bikes than in the cars.


There are often more passengers on motorbikes than in cars

Efforts to reduce car use are limited to an odd/even scheme on the main thoroughfare of Sudirman and few other key routes during rush hour: vehicles with odd numbered plates are allowed on odd dates, with even plates on even dates. Odd/even came in after a three-in-one car-pooling rule was scrapped in April after years of abuse. “Jockeys” would stand at the side of the road, offering themselves for rent so the driver could get the required two passengers; many were children, who took huge risks getting into the vehicles of strangers.
With the population of Greater Jakarta expected to increase from about 30 million today to more than 40 million by 2040 , wasting hours trapped in traffic looks set to become even more of a daily frustration for residents. Is Jakarta destined to be jammed forever, or does the city have an alternative?


Scooter city: ‘You can get anything delivered by bike here’

“Motorbikes are twice the speed of a car in Jakarta, they use a 10th of the fuel, are a 10th of the cost and use far less space,” says Nadiem Makarim, founder and chief executive of Go-Jek, the city’s two-wheeled version of Uber. “Motorbikes are much more efficient. There’s no reason for cars to exist in this city at all.”
Since Makarim’s company revolutionised the motorcycle taxi – or ojek – industry with the launch of a smartphone app last year, numbers have risen dramatically. Along with Malaysian rival Grab, and Uber’s Motor service, they have driven down fares – to the anger of some drivers.
The app has been downloaded 25 million times. As well as getting around, customers can get a massage therapist or a cleaner delivered to their door within 90 minutes. His food delivery business is now Asia’s largest outside China, and the Go-Jek also offers makeovers, theatre tickets, flowers, prescription medicines …

“It’s pretty hard to find something you can’t get by motorbike delivery,” says Makarim. “You don’t need to waste time in traffic to get what you want. We bring everything to you. If you didn’t want to you wouldn’t have to leave your apartment.”
Some in the city, though, are concerned the rise of motorbike taxi apps could tempt people away from buses and trains. “Motorcycle taxis kill public transport,” says Yoga Adiwinarto, country director of ITDP-Indonesia, the local branch of the non-profit Institute for Transportation and Development Policy.
Makarim doesn’t see it that way. “Our customers are smartphone users,” he says. “They are middle class people switching from private cars. They wouldn’t have travelled on buses anyway.”


The largest south-east Asian city without a metro

Regional rivals Manila (1984), Singapore (1987), Kuala Lumpur (1995) and Bangkok (2004), all got there first. But four decades after it was first mooted, construction has at last begun on Jakarta’s $1.7bn (£1.4bn) metro line, known as Mass Rapid Transit (MRT).
Difficulties acquiring land rights in the south of the city have delayed the overground section of the project but, when the first stage opens in 2019, it is set to halve the hour it takes to travel 12 miles from Lebak Bulus to Bunderan Hotel Indonesia in the centre by car.

A northern extension to Kampung Bandan near the waterfront is set to open in 2020. A second line running east-west, where many journeys are made, is under consideration.
A long-awaited link from the airport is set to start operating next year and the first phase of a light rail system is due to open in 2018, in time for the Asian Games. The new network should boost rail capacity from 800,000 to 1.2 million passengers a day.
Jakarta’s ageing Commuter Line trains make the journey from Bogor to the city centre in 55 minutes – twice as fast as the car. Excess passengers no longer ride on the roof or hang out of the doors after a recent crackdown, but inside the carriages the rush hour crush is as bad as ever.
The metro, light rail, airport link – and a planned bullet train from Bandung 100 miles to the east – will centre on a new hub at Dukuh Atas. The inevitable swanky shopping mall is being planned.
But is there a faster way to transform public transport in the city? Yoga says Jakarta’s Bus Rapid Transit (BRT) system, which the ITDP helped promote and design, took just two years to set up and the bill to the city was a fraction of the cost of the metro.


Bus Rapid Transit: ‘It’s quicker than cars for sure’

Twelve years ago Jakarta became the first south-east Asian city to open a BRT, inspired by visits from former Bogotá mayor Enrique Peñalosa.
The 120-mile Transjakarta network gives good coverage, within the city at least, and carries 350,000 people a day. Buses are air conditioned, with a separate section for women at the front, and 10 pink women-only buses have recently started operation.
“Within Jakarta itself the BRT is quite good,” says Yoga. “It’s quicker than cars for sure – and sometimes it’s quicker than motorcycle – but only within the city of Jakarta.”
Commuters trying to get to and from the outer cities of Bogor, Depok, Tangerang and Bekasi find the dedicated lanes stop as soon as they leave the city limits. A rush-hour BRT from Bogor to the centre takes two or three hours, and in Jakarta itself police officers turn a blind eye to cars and motorbikes using bus lanes when gridlock strikes.
Better links to the wider Great Jakarta area are vital to get more people on BRT, says Yoga. “Getting links to the outer city is problematic, with businesses pushing back and the government lacking political will. The city government is much more progressive in terms of mobility – they’re bringing in MRT, pushing public transport, charging for parking – but the national government never takes any action.”

Every Sunday morning thousands of people take to the main drags of Sudirman and Thamrin to take advantage of Jakarta’s car-free day.
Spotting cyclists on other days is harder. One is Gandrie Ramadhan, who rides 10 miles a day to work as a transport associate at the ITDP. He uses smaller side streets where he can but says major roads are unavoidable.
He takes me on a cycle around the expensive embassy district of Menteng, where light traffic and shady tree-lined streets make for a pleasant ride, but as soon as we get on the main thoroughfare of Sudirman it quickly gets more serious. Worst are the unpredictable, battered green Kopaja and orange/blue MetroMini buses which belch black smoke from poorly maintained diesel engines. 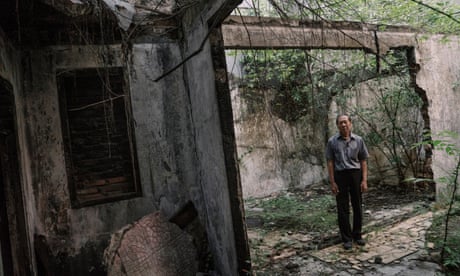 Waiting for Glodok: the ghost street haunted by Indonesia’s riots

Read more
“Cars are usually stopped so they’re ok but it is motorbikes which make it most dangerous,” says Gandrie. “Cycling has low status, and because we are seen as slow, the motorbikes always want to overtake us and get to the front. The Kopaja and MetroMinis are the worst, though. They make it horrible.”
Jakarta’s existing three cycle lanes are painted a foot or two wide – and ignored by motorists. Gandrie believes installing protected bike infrastructure is the only way to get more people cycling in the city. “And more offices with showers,” he adds.

Can Jakarta escape its nightmare traffic?

Instead of providing showers, most companies are more concerned with subsidising parking for their employees, says Yoga. Meanwhile, the government has approved plans for six new elevated toll highways crisscrossing the centre of the city, and its Low Cost Green Car initiative encourages car use by offering zero deposit and low interest on small-engined vehicles.
“Jakarta’s moving in the right direction but it’s not enough,” Yoga says. “The government is allowing low-density development outside the city, and the wider metro area is spreading. That makes it difficult for public transport because there isn’t the coverage. We need high density development where your first option is walking or cycling, and for longer journeys you can use the bus or metro.”
That may seem a long way from the current reality in Jakarta, but the government has a target to increase the share of trips on public transport from 23% to 60% by 2030 – and there is an incentive. As Yoga says: “Four hours every day wasted in a car is really not that pleasant.”
Posted by Save Marinwood at 12:00 AM

Email ThisBlogThis!Share to TwitterShare to FacebookShare to Pinterest
Labels: traffic