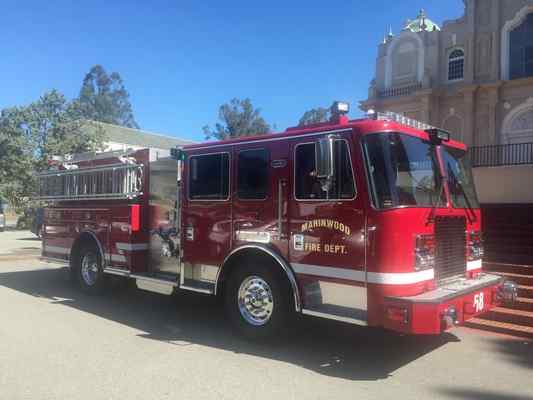 I could not believe this article in the Marin IJ which will definitely be read by lawsuit happy lawyers intent on extracting fees from the CSD.

As you are well aware, the contracting process has been difficult and the latest iteration only INCREASES liability because it attempts to straddle government contracting regulations without fully complying. In addition, the world has been notified by Leah's quote the district is now prepared to spend “whatever it costs to get the job done.” .  It is a very reckless statement that surely will cost the district.  She should immediately qualify this to the public or step down from the board.

The board should IMMEDIATELY withdraw any construction agreements above $25,000 which will place the project under government contracting laws.

Let's use some commonsense.  The chief is about to retire, we need to concentrate on a mergers with SRFD or another agency before he leaves us.  This distraction will only take time and money away from far more pressing issues.

============
There is no current bid for $25,000.  That company is no longer interested in working with the District.  And as far as I know there is no $200,000 lawsuit nor do I know of anyone threatening such a lawsuit.  I am working with a licensed registered contractor to come up with a reasonable bid to complete the project.  Stephen, your half truths and threats are doing very little to help the District complete business and will only further delay the project.

The district is wide open for a lawsuit given the administration of this project.  Of course, $200,000 lawsuit is simply just a guess what it could cost with an aggressive lawyer determined to milk the district.  The discussions are already in the public record where collusion, ignoring government contracting law and willingness to overpay for work is there for the world to see.

You, Chief Roach are particularly vulnerable.  I am merely informing you to stop before walking into the alligator swamp.  Again, I suffer insults from you instead a measured evaluation of the facts.   Several contractors, I know will be willing to do it under the $25k limit.  Someone suggested that Granite Expo in Emeryville could do it under $20k.  Did you even explore this option?   The whole project, from the "emergency mold" until today, seem to be forced upon the district.  A serviceable kitchen could be had for FREE but the insistence on a luxury kitchen with favored contractors is the only one deemed acceptable by the Marinwood CSD.

If you ignore the facts, then regrettably this issue could become much, much larger.

Ms. Green can proclaim, "We will pay whatever it takes" but the district must back it up with our taxes.  Wouldn't it be better to secure the retirements of employees first?

Like many taxpayers in the district,  I don't have a trust fund or a six figure pension to look forward to.  Instead,  I see a deep sea of red ink from feckless spending. And spending means taxes.

For the sake of the district, take positive action.  Go to Granite Expo today and get a quote.  If it is under $25k,  pull the trigger.  You'll show the public, that you are a good steward of taxpayer's money,  a leader for the department and will be remembered fondly in your retirement.

Do the right thing.