Since the 1970’s when Jerry Brown was first governor, the policies of Sacramento has been to make it expensive to live in California, to use government schools as weapons against the future and use zooming laws to disrupt the lives of many.
“In El Dorado County, road funds are redirected to smart growth locations. Rural roads take the hit and decline as in Tahoe. Smart growth takes money! El Dorado County has impact fees that now average $70,000 per new dwelling. Transportation impact fees alone are over $30,000 per home. The fees are so expensive that families with children cannot afford to live here. In the Buckeye Unified School District, where most growth has occurred, 744 homes were built in seven years but the district lost 18 students in those years. “
While this specially written for the California Political news and Views newsletter is about the Tahoe area, everywhere in the State we have these problems. Now President Obama wants to FORCE communities like Lake Tahoe to build “affordable” housing—imagine the cost of real housing if this occurs? Enjoy Lake Tahoe while you can—in the future you will not be allowed to drive into or through Yosemite, the same is in store for Lake Tahoe. 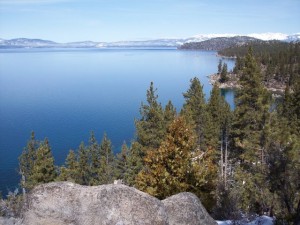 Henry Batsel, Special to the California Political News and Views, 6/16/15   Refundfees.com
Lake Tahoe was the first smart growth community. In all actuality, it has proved to be a social experiment. Enough time has passed to review the outcomes of social impacts created from “smart growth” because other communities have embraced many of those same environmental goals.
The Tahoe Regional Planning Agency (TRPA) set goals to reduce auto use to draconian levels and shut down development – even building on one’s approved residential lot is near impossible. The middle class is all but gone from Lake Tahoe and some residential areas have deteriorated to slum levels. Now we see other consequences of growth regulation on local communities caught up in the smart growth movement.
The State of California instituted Smart Growth regulations to reduce green house gas emissions. These regulations have changed the way land is developed, not so much in major cities, but in rural communities. The regulations force development to be compact, close to transportation hubs, and promote walking and bicycling to jobs.  In rural counties, zoning rights are transferred to large tracts of lands closer to urban areas and taken from rural properties. The more distant properties are down zoned and face more restrictive regulations. The desired effect is to stop rural development and reduce auto use – stop urban sprawl.  Some say it’s to stop growth entirely – like Lake Tahoe. This sounds good to some that lived in the cities and retired to rural areas.
In El Dorado County, road funds are redirected to smart growth locations. Rural roads take the hit and decline as in Tahoe. Smart growth takes money! El Dorado County has impact fees that now average $70,000 per new dwelling. Transportation impact fees alone are over $30,000 per home. The fees are so expensive that families with children cannot afford to live here. In the Buckeye Unified School District, where most growth has occurred, 744 homes were built in seven years but the district lost 18 students in those years. Less children means less soccer, baseball, and child related activities which reduces auto trips. Collecting transportation impact fees has become problematic as auto trip counts have also declined – many auto trip counts locations are below 2003 levels. Highway 50 ramp counts are down 12,150 per day from 2003 levels (Cal Trans web site – EDC ramp counts).
The big problem is rural education. Smart Growth causes serious declines in student enrollments and activities. Many rural school enrollments are now below 2002 population levels. According to the Department of Education, Lake Tahoe Schools have lost several thousand students. The remainder of the rural county is also in decline with the ability to fund teachers and facilities in crisis mode. Camino School looks like a dive, parking lots are deteriorated, wires are hanging down the walls, and paint is peeling. Union agreements preclude local parents from even painting the school.
By 2024, the Department of Finance has forecast El Dorado County will lose another 5,661 students. The loss in students means the loss of teachers, funding for sports, music, field trips, and facilities upkeep. School impact fees are legislated to mitigate the impacts of growth. Many rural schools have lost close to half of their student population but still collect growth mitigation fees as funding desperation sets in. Locals are rebelling against the unjustified fees and have a web site with extensive back up data – it is called Refundfees.com .
The California Department of Finance forecast Placer and Sacramento counties will add almost one million new residents in the next 50 years. Next door, El Dorado County is forecast to only increase population by about 25,000 persons in the next 50 years. Businesses, schools, governments, retirees, employees, and investments all need growth to survive. Regulating growth, if instituted nationally, would be ruinous to our country’s economy and our social systems as we see its effects in Smart Growth El Dorado County.
Raising kids in a rural setting was once a goal for many young families. It sounds good but the environmental movement’s Smart Growth agenda has unintended consequences. Country living is under attack and the results are devastating to the roads, teachers, schools, and dreams of young families and their children. In El Dorado County, we sell this destructive agenda as “preserving the rural character”.