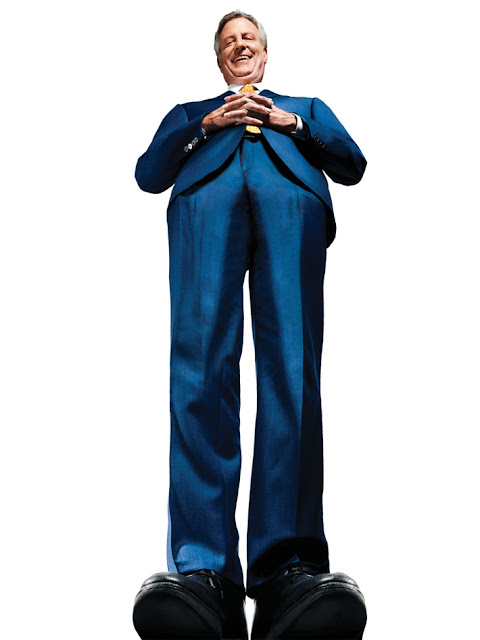 The cat’s out of the bag. In a Monday interview with New York magazine, New York City mayor Bill de Blasio admitted his disdain for private property and his desire for the government to control land distribution within the city.

The mayor went on an extended riff about the benefits of socialism when the interviewer asked what has been most difficult about reducing income inequality. “What’s been hardest is the way our legal system is structured to favor private property,” de Blasio replied. “I think people all over this city, of every background, would like to have the city government be able to determine which building goes where, how high it will be, who gets to live in it, what the rent will be.”
More from the mayor’s answer:

I think there’s a socialistic impulse, which I hear every day, in every kind of community, that they would like things to be planned in accordance to their needs. And I would, too. Unfortunately, what stands in the way of that is hundreds of years of history that have elevated property rights and wealth to the point that that’s the reality that calls the tune on a lot of development. . . .
Look, if I had my druthers, the city government would determine every single plot of land, how development would proceed. And there would be very stringent requirements around income levels and rents. That’s a world I’d love to see, and I think what we have, in this city at least, are people who would love to have the New Deal back, on one level. They’d love to have a very, very powerful government, including a federal government, involved in directly addressing their day-to-day reality. [Emphasis added.]

Earlier in life, De Blasio was a left-wing activist and an ardent supporter of the radical socialist government in Nicaragua — the Sandinista National Liberation Front — which at the time was strongly opposed by President Ronald Reagan and his administration.
Today, De Blasio is well known for his intensely progressive approach to managing New York City’s government. This interview reveals that perhaps his past desire for openly socialist policies still lingers.

Editor's Note:  Many politicians laud the virtue of "Plan Bay Area"  a central planning scheme to control housing and transportation in the Bay Area.  MTC is now plotting to control even MORE COUNTIES than the original nine Bay Area counties to include Sacramento and the Central Valley in a supra regional administrative government akin to socialism We do not think it will work out well for them.

Socialism is like a nude beach: sounds pretty good until you actually see it