Berkeley and Oakland have them. And so does the region’s environmental movement.By Robert Gammon @RobertGammon 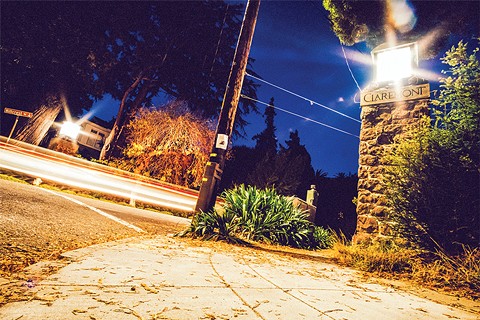 
Residents of Berkeley's Claremont neighborhood and Oakland's Upper Rockridge district pass by monuments to racism every day and probably don't realize it. It's not that the monuments are physically hidden; they're quite visible. But the monuments don't openly celebrate racism — like a statue of Robert E. Lee. Instead, their history is hidden, at least to those who don't know the story of how the neighborhoods began.

The monuments are actually large dual stone pillars that mark the entrances to the neighborhoods. The Claremont monuments guard the corner of Claremont Avenue and Hillcrest Road, and the white pillars of Upper Rockridge tower over Broadway at Rockridge Boulevard.

Both neighborhoods were created about the same time in the early 1900s by developers intent on establishing white-only areas. The developers attached racial "covenants" to the deeds of homes that forbid them from being sold or rented to people of color.

"No negroes, no Chinese, no Japanese can build or lease in Rock Ridge Park," stated a 1909 advertisement in the San Francisco Callnewspaper, referring to the neighborhood now known as Upper Rockridge.

"They would run ads that said, 'No Negroids and no Mongoloids' and all that nonsense," said Oakland historian Dennis Evanosky.

In 1916, Duncan McDuffie, developer of the Claremont neighborhood, convinced the city of Berkeley to create some of the nation's first zoning laws. Berkeley's laws initially were based on race because McDuffie wanted to also keep the nearby Elmwood district all-white due to the fact that it didn't have deed covenants. A year later, the U.S. Supreme outlawed race-based zoning, and in the following decades, racial covenants expired. The U.S. Supreme Court, however, didn't outlaw the enforcement of them until 1948.


Today, McDuffie is mostly celebrated because of his environmental record: He helped establish both the California State Parks and the East Bay Regional Park systems. But his racist legacy of exclusionary zoning continues in Claremont, Rockridge, Elmwood, and other neighborhoods. During the 1950s, '60s, and '70s, Oakland and Berkeley adopted exclusionary zoning rules — similar to the ones McDuffie originally advocated for — in many of the cities' mostly white neighborhoods, only allowing single-family homes on most streets in order to block the construction of apartment buildings, which might rent to low-income people of color.

Those zoning rules are still in effect in 2017, and neighborhoods like Claremont and Upper Rockridge remain predominantly white. The big stone pillars serve as reminders of that racist heritage.

North Berkeley also has a street and an entire neighborhood named after virulent racist environmentalists: Joseph and John Le Conte. "It's pretty disgusting when you think about it," Evanosky said.

During the Civil War, the Le Conte brothers, who were both academics, helped build munitions for the Confederacy. They were also slave owners. Joseph Le Conte once wrote that freeing the slaves and allowing Blacks to vote was "the greatest political crime ever perpetrated by any people."

But after the brothers moved west, John Le Conte, a physics professor, became president of UC Berkeley, and Joseph Le Conte landed a professorship of geology, natural history, and botany at the university.

Le Conte Hall on the UC Berkeley campus is also named after Joseph Le Conte, as is Le Conte Elementary School in Berkeley. In 2015, some parents and activists pushed to rename Le Conte school, citing Le Conte's racist history, but opponents argued that the name should remain because of his academic and environmental accomplishments. It's still called Le Conte.

Editor's Note:  Are the monuments on Las Gallinas "Monuments to Racism"?  The East Bay Express says "yes".  Notice the author also calls "environmentalism" racist.   This is part of the regional war on suburbia fought by the housing activist crowds.  Single family zoning is said to be racist and they want to abolish it in Marinwood/Lucas Valley and elsewhere.
Posted by Save Marinwood at 12:00 PM