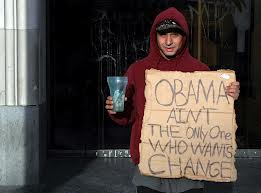 For two years, Eric Lloyd was a denizen of People's Park in Berkeley, a regular fixture in that city's homeless panoply.

But about a month ago, he got tired of getting robbed - and arrested for public drunkenness - so on the advice of a friend he moved to San Rafael.

"It's great here," he said Wednesday while basking in the sun on Fourth Street, the city's main commercial strip. "It's safe. No one hassles me. Will I stay here? Yeah, I think so. I like it here."

Lloyd is one of 900 or so homeless people in Marin County, most of whom are concentrated around a soup kitchen, park and free clinic in downtown San Rafael, drawing the ire of residents and merchants who say the middle-class city of 58,000 is bearing the brunt of Marin County's homeless issues.

"We have a small downtown - we can't absorb it," said Carol Thompson, director of the downtown business association. "People say they don't want to come to downtown San Rafael because they're afraid of the homeless. It's very frustrating because there's very little we can do about it."

San Rafael, the county seat and one of the oldest North Bay cities, has had homeless people for decades, as least since St. Vincent de Paul opened its doors in the 1940s. St. Vincent - or Vinnie's, as it's known - provides the county's only free dining room and a large array of services for low-income Marin residents. The city is also home to shelters, a free clinic, domestic violence and substance abuse centers, and several other nonprofits that serve Marin's low-income residents.

With the economic downturn, the number of people seeking help from St. Vincent has more than doubled, from about 6,000 a year to 15,000 annually, said Christine Paquette, the agency's development director.
Some of them suffer from chronic drug abuse or mental illness, and many are longtime Marin residents who lost their jobs in the recession and fell behind on their rents, which at an average of $1,900 for a two-bedroom apartment are among the highest in the nation.
The homeless population further swelled in the past year or two with the steady flow of transient young people making their way up and down the West Coast. With its mild weather, low crime rate and generous homeless services, San Rafael is a popular stop for those migrating up the coast.

The result is a triangular path bisected by Fourth Street, the city's historic shopping district, which San Rafael has spent at least a decade sprucing up and which now hosts myriad festivals, parades, farmers' markets and other attractions.

"Some of the homeless certainly cross the line. The pit bulls, the tossing of the f-word when you're walking down the street with your 6-year-old and Grandma - people aren't used to that, and they don't expect it. Especially in Marin," Paquette said. "For some people, an experience like that can ruin their afternoon."

More than 70 percent of downtown merchants say their business has been affected by the homeless, costing thousands of dollars in lost sales and tax revenue, Thompson and city staff members said.

Annie Bowman, who opened the furniture store Sunrise Home downtown 37 years ago, said she feels compassion for those who have no place to go but worries about the safety and comfort of her employees and customers.

"When I came to San Rafael, it was the epitome of a charming, vibrant downtown," she said. "It does break my heart to see it like this. It's a complex issue that's happening in other cities, too, but it seems the pendulum here has swung too far."

At the public library, staff members have "absolutely seen an increase" in the homeless population, said library director Sarah Houghton. Librarians have become de facto social workers, handling everything from fistfights to untreated mental illness to screaming and drug abuse, she said.

"More than anything, it means the staff has less time to help regular library patrons," she said. "It's no different than what's happening in San Francisco, just on a smaller scale."
San Rafael has taken many steps to address the issue: hiring the homeless to clean the streets, deploying more police downtown, clearing out encampments in the parks and adding more beds to a downtown detox center.

Merchants and homeless advocates both agree that those steps appear to be working. And, although the homeless sometimes defecate and urinate on the sidewalks, they don't often aggressively panhandle or commit crimes, Thompson said.

"Pops," 64, lived on San Rafael streets for nine years before recently moving in with a friend in Novato. He still dines at St. Vincent and said he sympathizes with both sides.
"No one wants to walk down the street and feel harassed or threatened. I'm not happy about it, either," he said last week while eating lunch. "But what can we do? We can't just put people on a bus to Richmond or Vallejo - that's where a lot of them came from to begin with. It's not an easy problem."

Lloyd, meanwhile, is enjoying his stay in Marin. The 49-year-old Missouri native has been homeless most of his life, he said, and he appreciates the quiet of San Rafael and generosity of its residents.
"Nice people. And St. Vincent is great," he said as he relaxed next to the Rafael Film Center. "I'm not out to get on people's nerves. ... I don't want people bothering me, either. Just like anyone, I want peace and quiet."

Editor's Note:  Homeless Shelters have been zoned somewhere in the unincorporated areas of the county near or in Marinwood.  I never was able to determine the location.  Someone needs to research this.  Thee winters ago, the sitting Marinwood CSD Board consisting of Bruce Anderson, Cyane Dandridge, Leah Green, Tarey Reed and Bill Hansel, voted to make the Marinwood Community Center an emergency homeless shelter.  It was never used.
Posted by Save Marinwood at 12:00 PM