Editor's Note: The problem has gotten considerably worse since this 2012 memo.  New school funding formula signed into law by Governor Brown has directed resources away from the Dixie School District. The Board of Supervisors and the San Rafael City Council has concentrated nearly 1500 government subsidized housing units in our district. They will pay little or no taxes and add hundreds if not thousands of students into Dixie schools WITHOUT A TAX BASE to support them.  We are witnessing a fundamental transformation of our neighborhoods from a suburb with adequate funding to severely underfunded government services.   This is a cost that will be borne entirely upon our backs.  So much for "fair" housing. 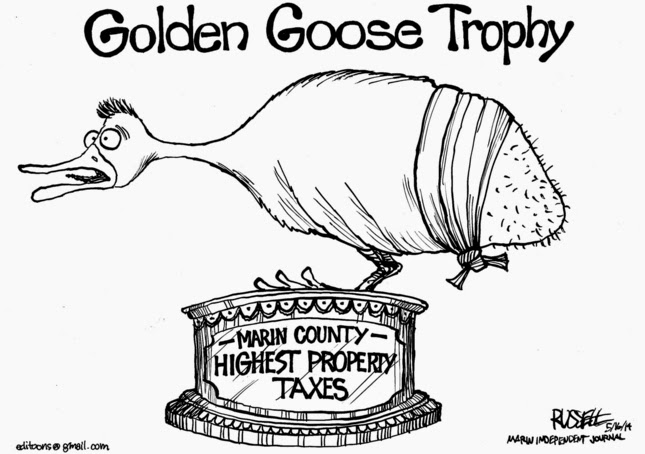 Over the last several years the state has experienced a severe recession and economic downturn which has affected school districts throughout the state. School districts have seen cuts upwards of
22% of what the state owes to them. Dixie School District has also been impacted by the state
budget crisis with state funding cuts and with the Basic Aid Fair Share. Since 2009-10 we have
been cut over $3.2 million in state funding, with expected future cuts of $1.1 annually.
Revenues have been stagnant and for 2011-12 were below the level of funding we received in 2007-08. Within the same period of time expenditures have increased over $300,000. We received one-time funding from AARA and Federal Jobs Bill revenues and additional revenues from the passage of Measure A in 2011. These additional resources, along with use of the general fund reserve, one-time solutions and spending cuts have helped us weather the storm and maintain most of the outstanding programs that the district offers.

Over the last two years we have closed our books spending more money than we brought in. This
deficit spending has decreased our general fund reserve by more than $600,000. Our reserve level is at its lowest in last several years and with its highest level of deficit spending projected.

Since the district adopted our budget in late June we have received several additional hits which has
put us at a critical juncture with our finances:

Enrollment Increase: After years of relatively stable enrollment, this year we had the largest growth
in enrollment since 1991/92 with an additional 85 students enrolled. As a Basic Aid district we do
not receive additional revenue for these students. The additional students have impacted us in
several ways, including the need for additional teaching staff; additional instructional aid time;
supplies and furniture; classroom space; increase in free & reduced lunches, and special education
costs.

Property Taxes: The biggest hit recently occurred when our local property tax revenues estimates
came in over $253,000 less than projected. This is unprecedented and we have asked the County
Assessor for an analysis of our tax role to see what changed. As a Basic Aid district, property taxes
make up the bulk of our general fund revenues.

All the items listed above have negatively impacted our budget. As a result this interim report and
multi-year projections indicate that in order to meet the requirements of AB1200, the district will
need to make $362,000 in reductions starting in 2013-14. This report only identifies the level of
Dixie School District reductions. The specific areas of reduction will be identified at 2nd Interim.

The Governor’s January Budget Proposal is scheduled for release on January 10, 2013. Hopefully,
the overall news from the state will be favorable to school districts. We are also expecting the
proposal to include a new Weighted Student Formula. We are also waiting for more clarification on
the possibility of additional funding for Basic Aid districts from Prop 30.

1st Interim Report 2012-13 Fiscal Year:
Attached is the First Interim Report for the current fiscal year. Districts are required by Education
Code Section 42130 to submit an interim report, which covers their financial and budgetary status as
of October 31, 2012 to the Governing Board of the District. This report includes the following
sections:
 District Certification of Interim Report – states whether or not the District is able to meet its
financial obligations and must be signed by the Governing Board President. Our financial statements indicate we will have a positive certification.

 Revenues, Expenditures and Changes in Fund Balance – this is a summary of the General Fund Budget, including reports for unrestricted, restricted and combined General Fund. This form compares the Original Adopted Budget, the Board Approved Operating Budget and the Projected Year Budget along with detailing the current expenditures as of October 31, 2012.

Similar forms for each district fund are also included.

previously earmarked for Basic Aid Fair Share is already taken out of this balance. With

from Budget Adoption estimates. Budget adoption was based on enrollment projections and we

have now updated the ADA estimate based on current enrollment numbers

estimates for the remaining months of the fiscal year. The Cash Flow worksheet indicates that

the District will maintain a positive cash balance at the end of the fiscal year.

a summary report for current year and the subsequent two fiscal years. Similar forms for each

district fund are also included. This report indicates that the district will meet the requirements

 This will be reversed when unrestricted resources become available.

 The district has identified the need to reduce expenditures of $362,000 starting in 2013-

14. This is listed on the “”Other Adjustments” section of the MYP Form 01

 This report only identifies the level of necessary cuts. Specific areas of reductions

will be provided at 2nd Interim

(Adopted) to the Board Approved Operating and Projected Year Budget. The District continues

to remain in Basic Aid status mainly due to the state deficit reduction factor.

analyzing areas of the budget and comparing them to historical and standard criteria.

Explanations must be provided for areas that are a deviation from the standards.

Prepared by: Approved for Submission to the Governing Board