The developers win (and homeowners like you lose) Lessons for Marin from Seattle, WA 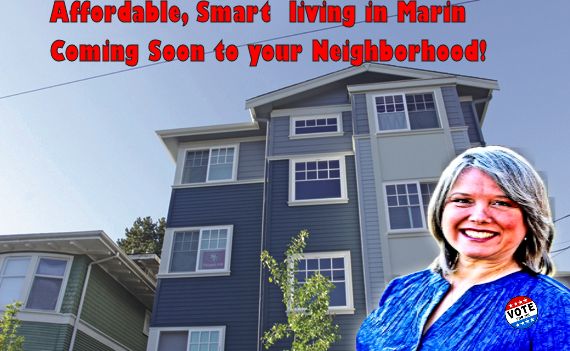 Editor's Note: This is an email that comes to us from our "comrades in arms" against Stupid planning that destroy single family neighborhoods.  In Seattle, "Smart Growth" planners and politicians have allowed "sideyard" houses and apartments in the formerly sylvan, historic neighborhoods.  In Marin, we are facing the same future if our "smart growth" mafia is allowed to wreck neighborhoods by upzoning to allow lot splits and multifamily homes.  To see what they are objecting too check out their photo essay on 122 obnoxious homes that have been crowded into their neighborhoods destroying backyards, sunlight and privacy, while increasing traffic, pollution and destroying the fabric of the neighborhoods.  We have seen the bold vision of ABAG to urbanize Marin.  We must Save Marin again!
------------
From www.onehomeperlot.com
Sorry, supporters, homeowners and citizens. We tried, but the developers won.

At yesterday's Planning, Land Use and Sustainability committee meeting, the council members voted on the most controversial aspects of the new building codes for backyard / side yard houses and demonstrated that they want this kind of development to continue unabated.

Council member Mike O'Brien -- the head of the PLUS committee -- pushed hard on all the other committee members to vote in favor of the Smart Growth Seattle pro-developer issues. He's eager to wrap this up, end the moratorium and let the developers start building in backyards and side yards again.

Council member Sally Clark -- who has been invisible for the last 19 months that this issue was being discussed -- showed up today to cast her votes in favor of the Smart Growth Seattle pro-developer issues, as well. She's an alternative member of the committee. If she had not showed up to support the developers, the outcome of yesterday's voting would have been very different.

During the committee's discussion period, O'Brien claimed to be aware of a few bad examples of backyard / side yard houses, but said he'd also seen many that were really good for their neighborhoods. Really?

- It sounds like Mr. O'Brien missed these photos and addresses for 122 backyard / side yard houses that are driving neighborhoods all across the city nuts.

- He must have also missed the last two years of media coverage showing homeowner after homeowner forced to live in the shadows of backyard / side yard houses.

- Somehow he also missed the petition signed by 760 Seattleites who are furious about backyard / side yard houses.

- Maybe he's forgotten about the hundreds of angry citizens who called, wrote letters, and took time off work to personally testify about this issue in front of him and the rest of the city council over the last 19 months.

It seems all that's really sticking with him at this point is the private tour that the developers took him on last month to show off the few backyard / side yard houses that they want the public to see.

Council members Nick Licata and Tim Burgess tried to make a stand on a few of the uglier amendments voted on yesterday but were unsuccessful.

The only issue the committee wasn't able to resolve is the developers' dream of getting The 100 Percent Rule passed. Both O'Brien and Clark argued that the rule would be good for the city, or at least not terribly bad. Clark even tried to convince the other council members that it would replace the existing 75/80 Rule (not true). But Licata and Burgess know better. They held their ground and said they were opposed. Burgess said he thought The 100 Percent Rule would be something the city would later regret (and he's right). So that amendment will be debated, and potentially voted on, by the entire city council at the city council's May 19 meeting.

Here's a summary of what the future in Seattle looks like for backyard / side yard houses (and the homeowners who have to live around them):


WHAT THESE DEVELOPERS WILL STILL BE ABLE TO DO

Build more towering three-story houses -- The old height limit for the smallest of backyard / side yard lots was 30 feet. The new height limit is 27 feet. Requiring backyard / side yard houses to be just three feet shorter isn't going to provide any relief for the surrounding neighborhood. It's a slap in the face to everyone (that's all 750-plus of you) who complained that these giant boxes are ruining the neighborhood dynamic

Turn existing small-lot homes into skinny neighborhood skyscrapers -- The developers at Smart Growth Seattle lobbied council member O'Brien aggressively over the last six weeks to make it easier for them to also turn existing small homes on small lots into three-story skinny towers. Smart
Growth's lobbyist adroitly positioned it as a protection for existing homeowners,which gave O'Brien and the rest of the PLUS committee the cover to vote through an amendment that allows developers to build small-lot homes even taller than 27 feet in "remodel" situations.


As you know, developers have become experts at turning "remodels" into full-on new homes by keeping only three walls from the original home. Expect to see more of that on small lots.

Build two backyard / side yard houses side-by-side -- The DPD tried to end the practice of building two side yard homes side-by-side, but council members O'Brien and Clark were successful in getting that amendment killed.


WHAT THESE DEVELOPERS WILL NO LONGER BE ABLE TO DO

No more developing these homes without any warning to the surrounding property owners -- The new rules will require the Department of Planning and Development to provide the neighbors with notice when a backyard / side yard house is being considered for approval (but only on the smallest of undersized lots). For undersized backyard / side yard lots 3,200 square feet and larger, there will be no warning / notice provided to the surrounding homeowners.

While the notification issue is a nice win for homeowners, the city was going to be forced to provide notice sooner or later. There's a notification-rights lawsuit pending in federal court currently, and state representatives Pollet and Tarelton have threatened to introduce notification legislation at the state level again if the city doesn't do so on its own. The truth is, by not providing notice, the city is preventing homeowners from being able to file lawsuits in the required 21 days, and at some point the city is going to be dragged into compliance with federal law.

No more building on lots smaller than 2,500 square feet (unless the 100 Percent Rule passes with no lot-size restriction, in which case that would be the only exception).

No more building on long-forgotten historic sub-lots -- This practice is still not outlawed, but the new rules make it much tougher for developers to use historic maps and documents to justify building on sub-lots that are so long forgotten they don't exist on any current plat maps.

No more pretending the side or back of a house is the front to qualify for building-code exceptions. As ridiculous as this practice sounds, these developers had been using the trick for years to justify building in backyards and side yards.

No more abusing the definition of “lot” to incorporate adjacent land into lot-area calculations -- This closes a loophole these developers were using to satisfy lot-area requirements when they didn't actually have the required amount of land.

We've been working as a united group of citywide neighborhood representatives for 19 months to convince the PLUS committee that the building codes for backyard / side yard houses need to be revamped. We provided facts, figures, photos and testimony. We compromised on our principles again and again to try and find workable middle-ground. And we worked overtime to educate everyone involved about the confusing and technical building codes involved. So the results of yesterday's PLUS meeting really stung.

Then again, it should have been clear that homeowners were going to get shafted  when the lobbyist for the developers took to the public microphone before the meeting and couldn't help but chuckle and joke before smugly thanking the committee for their "hard work." As usual, he had the inside scoop on what was about to happen.


In an interview with Publicola after the meeting the developers were obviously quite pleased. Their lobbyist called yesterdays outcome "a consistent, sensible way to achieve what council member [Mike] O'Brien and [Sally] Clark supported: Scaled, reasonable, new infill development."


Translation: The developers won. You lost. And council members O'Brien and Clark deserve all the credit.


For those of you who want to see the technical details of what was decided yesterday, this city council document lays out all the amendments the PLUS committee members had to choose from (the committee voted "yes" for 1B, 2B, 4B, 5B and 6C).

We'll let you know whether the 100 Percent Rule amendment is also approved at the full city council meeting May 19.


Learn more about our group: http://www.onehomeperlot.com

Become a supporter: http://www.onehomeperlot.com/join-us
Posted by Save Marinwood at 12:00 AM