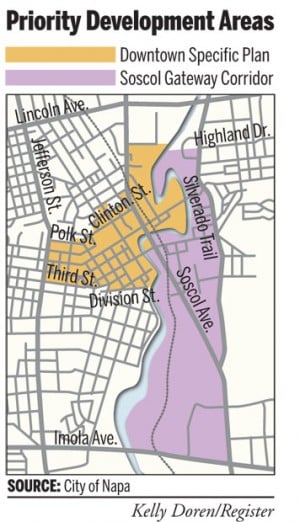 
After more than a month of sparring with city of Napa officials over the city’s pursuit to become a priority development area, Napa County Supervisor Mark Luce said he’s backing off pledges to fight the city’s application at the Association of Bay Area Governments.

At the suggestion of ABAG staff, the Napa City Council voted Tuesday night to revise the city’s application for downtown and the Soscol Gateway Corridor, shifting from a request to become a “transit town center” priority development area to a “transit neighborhood” designation.
The transit town center designation has a guideline of 3,000 to 7,500 housing units, while transit neighborhood has a guideline of 1,500 to 4,000 units. [Editor's note: Marinwood Priority Development Area is designated as a "transit neighborhood.  Can you imagine 4000 units of housing east of Las Gallinas?see PDA to Urbanize Marinwood-Lucas Valley ]

Luce, the president of ABAG, said Wednesday the revision was enough to placate some of his concerns, and he’s removing his opposition to the application before it goes before ABAG’s executive board for a decision on July 19.

“I personally don’t like a PDA in the city of Napa,” Luce said. “But that’s just my opinion. I will remove my opposition and respect the council’s wish.”

Luce’s change of opinion also comes on the heels of ABAG staff affirming support for the city’s application this week. Because the city meets the criteria for a PDA, it should be approved, ABAG Principal Planner Miriam Chion has said. [Editor's Note: Is this the "local control" that ABAG president Luce said we will have at "the great debate". It sounds like coercion to me]

City officials have rejected Luce’s argument that becoming a priority development area would require the city to assume a greater ABAG housing allocation in the future.

Dozens of Bay Area cities have had the transit town center designation approved, ranging from areas of San Francisco to cities as small as Cotati in Sonoma County, whose population is approximately 7,000 residents.

City officials and ABAG staff said that housing guidelines don’t carry much weight when designating priority development areas. The only basis for approving a transit PDA is whether the town is in an urban area, has a density of 20-units per acre, and a transit service comes every 20 minutes, they have said.[Editor's Note:  Is this the real reason Marin County Supervisor Susan Adams has insists on running empty buses through our neighborhood?]

The city contended throughout the dispute that it’s only planning for 1,300 housing units in downtown and along Soscol Avenue, which is fewer than either of the transit designation’s guidelines.

The city easily met the PDA criteria, but was the only town to meet the criteria and have its application blocked. At a regional planning committee meeting June 6, Luce moved to block the request.

“It appears, as the president of ABAG, (Luce is) not a fan of it for Napa, but didn’t have a problem with it for Cotati?” van Gorder asked Wednesday. “He didn’t block Cotati. It feels like political gamesmanship to me.”

Van Gorder said at Tuesday’s council meeting that he preferred the city not revise its application from “transit town center” priority development area to a “transit neighborhood” designation.
“I think we had a very good application in place,” van Gorder said. “I see no reason to change our application.”

The change to a transit neighborhood designation doesn’t change the amount of money the city stands to receive if the application is approved.

From 2012 to 2015, Napa County has been allocated to receive $2.6 million in grant funding through ABAG and the Metropolitan Transportation Commission. Half of that, or $1.3 million, has been earmarked for priority development areas, meaning only American Canyon, currently the county’s only PDA, could lay claim to that money.

City Councilwoman Juliana Inman said Tuesday she favored changing the application because it would better secure access to transportation funding, which could be used to pay for planning along the Highway 29 corridor between American Canyon and Napa.

“Let’s see if we can get some grant funding to help with that process,” Inman said. “I think this would be a good direction.”

While the showdown between Napa and Luce likely won’t materialize at the July 19 ABAG meeting, van Gorder said he doesn’t expect the issue to go away.

“I think the issue’s going to come up in the campaign,” said van Gorder. Luce’s earlier stance at ABAG could have cost the city major transportation funding, he said.
Luce said he didn’t believe the issue would resurface in the campaign, but it could remind voters of how he’s representing them in regional government.

“I think what it has brought home is that my role as ABAG president is relevant,” Luce said. “It’s not just housing. There’s a lot of regional government issues.”

Mark Luce Campaign info AGAINST PDAs
Posted by Save Marinwood at 12:00 PM