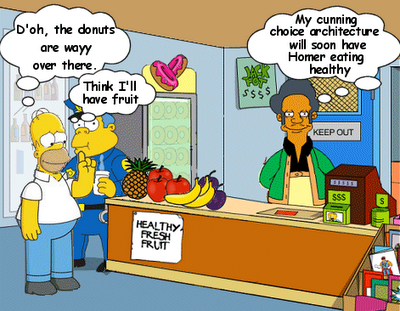 “A growing body of evidence demonstrates that behavioral science insights — research findings from fields such as behavioral economics and psychology about how people make decisions and act on them — can be used to design government policies to better serve the American people,” reads the executive order, released on Tuesday.

The new program is the end result of a policy proposal the White House floated in 2013 entitled “Strengthening Federal Capacity for Behavioral Insights.”

According to a document released by the White House at that time, the program was modeled on one implemented in the U.K. in 2010. That initiative created a Behavioral Insights Teams, which used “iterative experimentation” to test “interventions that will further advance priorities of the British government.”

The initiative draws on research from University of Chicago economist Richard Thaler and Harvard law school professor Cass Sunstein, who was also dubbed Obama’s regulatory czar. The two behavioral scientists argued in their 2008 book “Nudge” that government policies can be designed in a way that “nudges” citizens towards certain behaviors and choices.
The desired choices almost always advance the goals of the federal government, though they are often couched as ways to cut overall program spending.

In its 2013 memo, which was reported by Fox News at the time, the White House openly admitted that the initiative involved behavioral experimentation.

“The federal government is currently creating a new team that will help build federal capacity to experiment with these approaches, and to scale behavioral interventions that have been rigorously evaluated, using, where possible, randomized controlled trials,” the memo read.
That document cited examples from the U.K. which showed that sending out a letter to late taxpayers which read “9 out of 10 people in Britain pay their taxes on time” led to a 15 percent increase in compliance.

The new executive order encourages federal agencies to “identify policies, programs, and operations where applying behavioral science insights may yield substantial improvements in public welfare, program outcomes, and program cost effectiveness,” as well as to “develop strategies for applying behavioral science insights to programs and, where possible, rigorously test and evaluate the impact of these insights.”

To jump-start the programs, agencies are encouraged to recruit behavioral science experts to join the federal government and to develop relationships with researchers in order to “better use empirical findings from the behavioral sciences.”

A fact sheet sent out by the White House on Tuesday shows that researchers at numerous universities and think tanks — from MIT, Harvard, and the Brookings Institute, to name a few — have signed on to the program.

This can be achieved by “administrative hurdles, shortening wait times, and simplifying forms,” the order suggests.

The initiative also urges agencies to tinker with how information is presented to individuals, consumers, borrowers, and program beneficiaries.

The “content, format, timing, and medium by which information is conveyed” should be taken into consideration as those characteristics affect “comprehension and action by individuals.”

In programs that offer choices for consumers, agencies are instructed to “consider how the presentation and structure of those choices, including the order, number, and arrangement of options, can most effectively promote public welfare.”

The order also suggests that agencies fiddle with whether to label certain expenditures as “benefits, taxes, subsidies” or other incentives to “efficiently promote” programs.
President Obama’s federal health care law, Obamacare, is replete with “nudge” language and experimentation
.
In its fact sheet, the White House noted that reminding individuals who had started to sign up for Obamacare led to a 13 percent increase in completed applications.

To help determine which presentation was more effective, the Department of Health and Human Services “sent one of eight behaviorally designed letter variants to each of more than 700,000 individuals who had already begun the health insurance enrollment process but had not yet completed an application.”

The most effective version of the letter generated the 13 percent improvement. Other less effective letters only increased enrollment rates by around four percent.
Another nudge contained in Obamacare was brought to light in the debate over whether the individual mandate contained in the law was a tax hike.

Republicans insisted that it was a tax increase, but the White House portrayed it as a penalty on the logic that the word “tax” has a negative connotation.

While the Obama administration touts nudge policies, others are hesitant to get on board.
“I am very skeptical of a team promoting nudge policies,” Michael Thomas, an economist at Utah State University, told Fox News in 2013.

“Ultimately, nudging…assumes a small group of people in government know better about choices than the individuals making them.”
Read more: http://dailycaller.com/2015/09/15/president-obama-orders-behavioral-experiments-on-american-public/#ixzz3mPrpdWh2
Posted by Save Marinwood at 12:00 PM