Editor's Note: The fight for sensible land use is being fought in Seattle too. Like Marin, zealous planners, politicians and housing advocates are rezoning neighborhoods for affordable housing, micro apartments and the conversion of single family neighborhoods into multifamily apartment blocks. This is the idea behind the Priority Development Area in Marinwood and the rest of the 101 corridor. This is the future of Marinwood if they get their way and pass SB-1. It will allow redevelopment ANYWHERE without a declaration of blight.

The Fight Against Small Apartments

Why Neighborhood Groups Are Uniting to Stop Developers from Building Tiny, Affordable Units 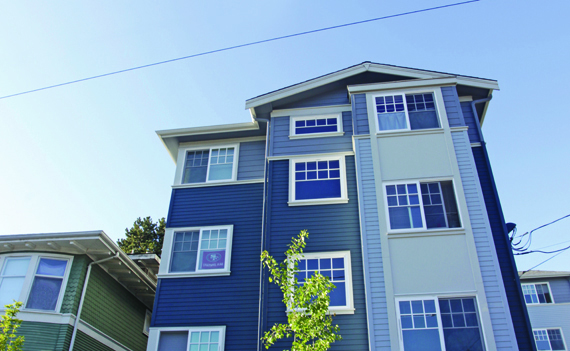 
In May of 2009, a rumor was floating around City Hall. Homeowners on Capitol Hill were furious about a construction project. So one sunny afternoon, while workers hammered nails into a few unfinished buildings near 23rd Avenue and East John Street, I went knocking on doors to find out what the problem was.
One neighbor was Alan Gossett. Gossett was trying to sell his blue Craftsman house, which shared an alley with the new development. Standing on the corner of his rear deck, Gossett pointed through the trees to the half-built structure and said, "I think this is going to be a magnet for very sketchy people."
Why sketchy?
According to permitting paperwork, the building was a commonplace cluster of six town houses—the sort that would typically attract well-to-do buyers. But inside each town house, the developer was building up to eight tiny units (about 150 to 250 square feet each, roughly the size of a carport) to be rented out separately. The tenants would each have a private bathroom and kitchenette, with a sink and microwave, but they would share one full kitchen for every eight residents. The rent would be cheap—starting at $500 a month, including all utilities and Wi-Fi—making this essentially affordable housing in the heart of the city. And, remarkably, for affordable housing, it was built without any subsidies from the city's housing levy. But Gossett was bracing for 46 low-income renters in the space where he'd been expecting six new homeowners instead.
Gossett and other neighbors felt hoodwinked, they told me.
There was no public notification and no review process that allowed neighbors to pose objections. This was due to a loophole in the permits: The city and developers classified the building as six units (with up to eight bedrooms each), instead of as an apartment building with dozens of units, which would have required a more public process. Neighbors said they feared that the area wasn't ready for so many new residents and that the influx of newcomers would usurp on-street parking. But Gossett also seemed concerned by who his new neighbors might be.
"Anyone who can scrape up enough money to live month-to-month can live there," he said, worried that low-income interlopers would jeopardize his chances to sell his own house. "I don't think most people want to live next to a boarding house with itinerant people living in it."