Posted by: Jim Phelps - March 25, 2018 - 9:13pm
Marin Clean Energy is sitting on a mountain of cash that continues to grow. The cash doesn’t belong to MCE, a not-for-profit government agency, it belongs to its ratepayers. MCE has no plans of returning it.
MCE's pre-launch commitments with the community included:
MCE has failed in serving the community, while it feathers its own nest.
MCE – Massive Cash Exploit
MCE now holds $37 million in cash and expects that to more than triple to $118 million by the end of its 2019/20 fiscal year. This behavior is more fitting of a private for-profit company that claims altruistic social objectives, then takes advantage of busy consumers who aren’t aware of what is happening.
MCE’s cash accumulation has not been used to reduce prices, unless 6/100 of 1%below PG&E prices is considered low; nor has the cash been applied to the purchase and delivery of real clean energy to MCE’s customers during the past few years.
Where’s the money going?
To assuage onlookers’ potential objections, MCE claims the cash is needed for “working capital requirements.” However, as a percent of operations, MCE’s desired cash dwarfs its previous requirements, as identified in each generation of its several revised Implementation Plans.
MCE also claims the cash is needed for “rate stability” and to “procure energy at competitive rates.” That is a reasonable suggestion, but it must be weighed against MCE’s record. It is just as reasonable to ask: How can MCE have banked $37 million in cash if it’s not already procuring energy at competitive rates?
Discovery of MCE’s cash horde prompted one energy trader in Oregon to offer the following off-the-record observation:
The place is gorging on cash. MCE is, to be generous, nothing more than a trading house -- a broker – that is not exposed to having risk associated with acquiring and maintaining an inventory while holding it to fulfill customer demands for that inventory. MCE’s inventory is dispatched instantaneously. MCE has no power resources to maintain. It doesn’t even pay to clean the panels at its “local” solar power plants – those solar farms are owned by private developers who bankrolled and own those resources. So, what does MCE’s staff need all of this cash for? Legal, consulting fees, staff salaries, and bonuses.”
Those comments are more troubling after examining MCE’s history of choreographed bait & switch that extends through all of its operations with fashionable, headline-grabbing commitments that it quietly changes when it believes no one is reconciling its behavior. This includes:
MCE got it “wrong” even before its business launch, when its leadership failed to prioritize its customers first, and instead favored its staff and consultants. MCE elicits a communal awareness of environmental sell-out each time it tells consumers that Shell is gone and that it has cleaned up its own oily mess, then surreptitiously cuts another million-dollar payment to Royal Dutch Shell for electricity purchases.
MCE is beyond tone-deaf.
Imagine the bait & switch uproar at MCE if, instead of receiving paychecks, staffers were suddenly given coupons that identified someone else, someplace else, had already completed similar work to what they completed and that, as a result, the coupon could be redeemed for pennies on the dollar.
This is akin to what MCE does to the community each time it enters into a REC transaction. Consumers paid for clean energy, but MCE delivers fossil-loaded power (known as "Unspecified power," sourced through California's electric grid manager, CAISO). This arrogance extends to, and is underwritten by, MCE’s board. The cash hoarding occurs under its watch.
Think the deviations won’t happen to your CCA board if you’re forewarned?
Yes. They will.
The list of MCE’s bait & switch is exhaustive and illuminates the absence of integrity in community choice aggregation (CCA). It’s a problem that will only grow as CCA (aka community choice energy (CCE)) boards grow in number, as municipal representatives come aboard to take their representative positions on unwieldy large governing bodies.
It’s a matter of conversion and indoctrination. Group-think boards are shaped by ambitious executives and shrewd consultants who hone their skills from experience and information-sharing with other consultants at other CCAs.
The loss of critical and independent thinking by MCE’s board was evident when meeting with one of its board members in January 2015, after one year of his service on MCE’s board (see the comments at bottom of board member's post). When MCE’s green-washing activities with RECs was discussed, he denied what had happened and said, “That’s not my understanding of it.” Fair enough.
When he was shown MCE’s Business Plan identifying MCE’s unlikely use of RECs, he bristled, “It says 'potentially' right there! MCE isn’t doing anything with RECs it said it wouldn’t. So, what’s the problem?”
Here is the problem.
Language is carefully twisted. Today, to combat objections, proposed CCAs throughout California promise one thing during public presentations, while their Business Plans include parsed wording that includes loopholes big enough to pass a coal-fired power plant through. Los Angeles’ CCE believes it can ignore California’s clean energy mandates and simply make up its own rules. [Foot note1] 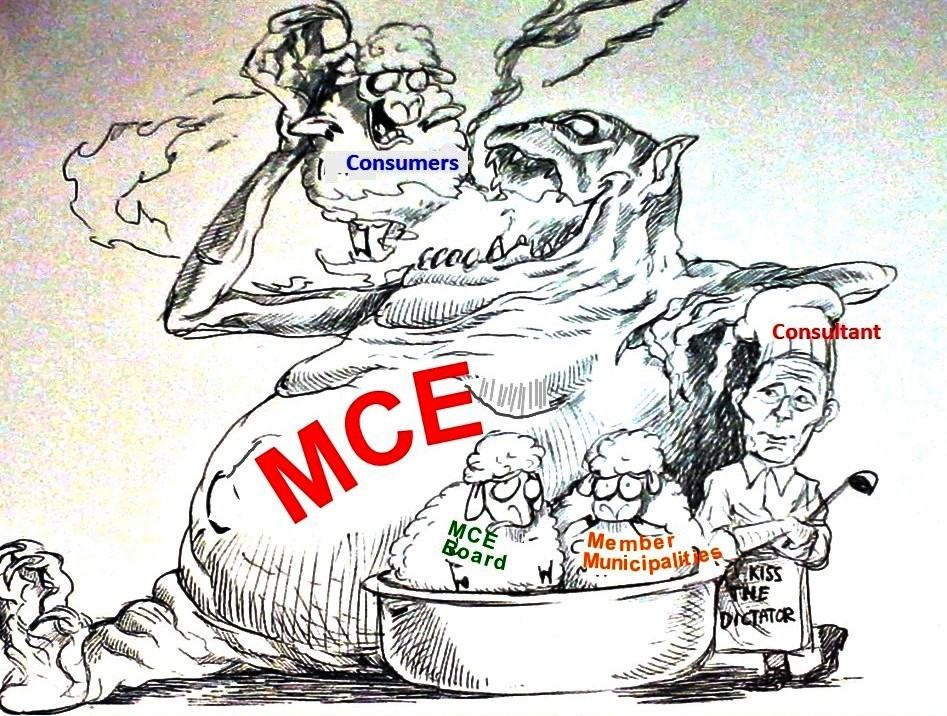 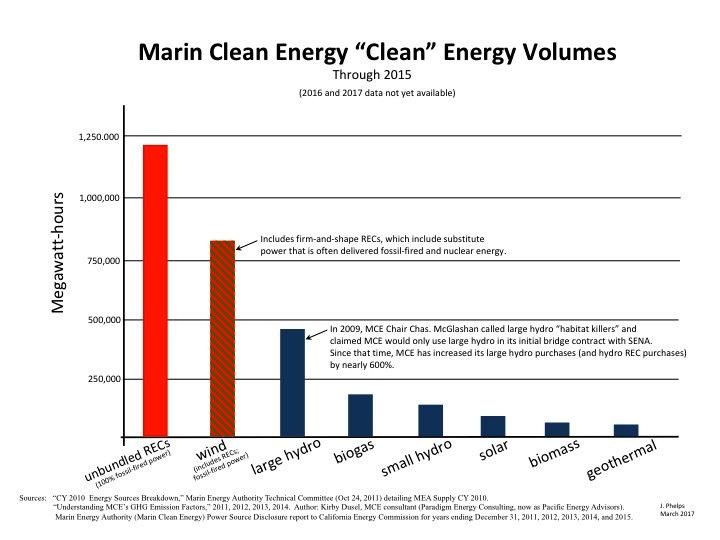 Click image of chart to enlarge
To date, Weisz ignores inquiries about returning its cash to MCE’s ratepayers.
What to do?
Opt Out of MCE at (888) 632-3674. You will need your PG&E bill in hand to refer to your account number. You may also complain to your city council or, if you reside in an unincorporated area, County Supervisors.
It is recommended that MCE’s board does the following six things to introduce integrity to its operations:
FOOTNOTES
[1] LACCE Business Plan, dated June 30, 2016. Page 21, Exhibit 15, shows LACCE (aka Clean Power Alliance of Southern California) believes it can satisfy California's clean energy requirements with 100% Bucket 2 energy. However, California regulations limit Bucket 2 to a maximum of 25%.
[2] Marin Energy Authority Community Choice Aggregation Implementation Plan and Statement of Intent, January 2010: Retail Sales (MWh), p. 29, and Marin Clean Energy Summary of CCA Program Phase-In (January 2010 through December 2015), p. 43.
[3] PG&E Power Charge Indifference Adjustment Rates, updated 5/31/2016 by MCE. See also footnote 2.
Part 1 in this series may be found here.
Part 3 in this series will discuss (1) MCE’s public rejection of false green energy – renewable energy certificates (RECs) -- and its concurrent use of a front organization that lobbies for the continued use of RECs; and (2) MCE’s quid pro quo outreach where jobs are promised in exchange for favorable public relations in its coming fight with legislators and utility companies.
About the Author:
Jim Phelps is retired after serving the power, petrochemical, and geothermal industries for nearly 35 years as a power contractor and utility rate analyst. He is not now, nor has he ever been, employed by PG&E. He has not received any money from PG&E for his work tracking Community Choice Aggregation and Community Choice Energy activities. He has also completed consulting and thermal performance test work for Shell Oil at one of its Gulf Coast refineries. Shell is formerly MCE's full-services energy manager and currently one of its regular energy providers.
Among the former power company clients of Mr. Phelps' are Pacific Corp, Utah & Power Light, Kansas Power & Light, Duke Power Company, Cincinnati Gas & Electric, Pacific Gas & Electric, and Carolina Power & Light.


Mr. Phelps operates one of Marin's largest residential solar electric systems at his home in Novato. Several years ago he initiated contact with PG&E about its carbon emission practices and also with MCE about its emission practices. He requested clarification from MCE and other CCAs about several business conduct issues, however, those CCAs declined to provide answers. To this time, MCE's only input about its business is to ignore Public Records Act requests, to identify the costs for copies of public documents, or to deny the existence of basic information, such as invoices detailing its procured volumes of system power (fossil energy).
Posted by Save Marinwood at 12:00 PM

Email ThisBlogThis!Share to TwitterShare to FacebookShare to Pinterest
Labels: MCE