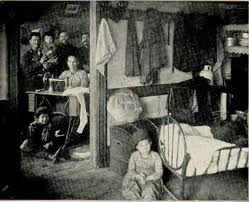 Many American families a few generations ago lived like this 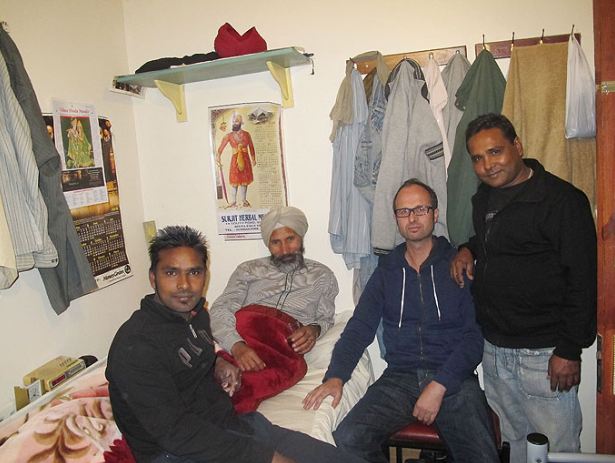 Editor's Note:  We showed you three of Bridge Housing's family apartment complexes in San Rafael. Two of the complexes are in the Canal District which is largely populated by immigrants from Mexico and Central America. They tend to work in landscaping, agriculture, construction, cleaning. They are hard working community, many are undocumented living under the constant fear of deportation.

Entire villages from their old country will often live in the same apartment building , several families per apartment just as new European immigrants did in the last century. This study found that an average of 1.8 people per room in Santa Rosa among farmworkers. This means that an average two bedroom apartment will have 6 people. People often sleep in kitchens and living rooms to save money.

Marinwood Village is expected to have 83 apartment units of one, two and three bedroom units. It will be Bridge Housing's largest family complex in Marin County. It is not inconceivable that it will have a population of 600 people (300 school children) because of apartment overcrowding.

Those of us who have actually visited the homes of typical low income apartments in California know this is not an exaggeration. We also know that this community are industrious, rich in heritage, have a strong sense of family.

Pleasanton found that 3.1 children occupied each low income apartment, forcing them to build new schools. Dixie School District is over capacity now. Some classrooms have 28 children per teacher instead of the state standard of 18. Any addition of children will be very costly. It will require more classrooms, teachers and administrators or possibly a whole new school.

Indigenous farmworkers throughout California face consistently appalling living conditions
and the degree of crowding is truly remarkable. Additionally, some still live in make-shift shelters or without shelter at all. 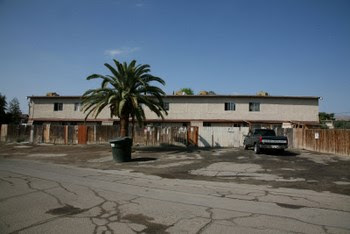 Many indigenous farm workers live in rundown apartment complexes like this one near Bakersfield, at the southern end of California's Central Valley.

Most indigenous individuals and families live crowded in apartments or rented houses or trailers. A considerable proportion (about one in ten) lives in barracks, make-shift buildings and vehicles behind houses, and other structures.

Finally, there is a relatively small group who live in the canyons of northern San Diego County and elsewhere in the state outside in caves or in plastic structures.

Few indigenous farmworker families own the dwelling they occupy. In our survey (the Indigenous Community Survey) only about one in 10 owned the dwelling they lived in and most of these were trailers. In the bigger, more complete survey done by the Department of Labor called the National Agricultural Workers Survey (NAWS) only one in 25 of Southern Mexicans (most of whom are indigenous) own their home. 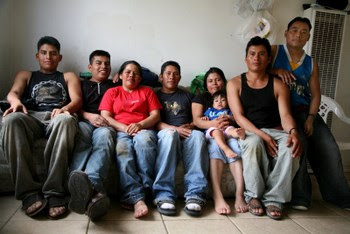 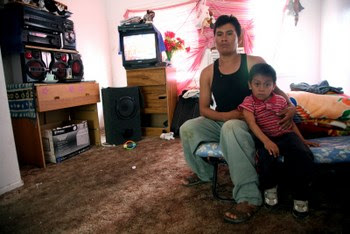 The IFS found people living in extremely crowded conditions. This Mixtec farm worker is from San Pablo Tijaltepec in Oaxaca. He and his son share a room with several other adults and children near Bakersfield.

Almost all indigenous farmworkers are renters and many live in dwellings where many families and individuals share the rent. In the Indigenous Community Survey, we found that families were paying about $400 a month, while individuals paying rent for just one person were paying about $150 per month. The rents seem to be similar regardless of whether the farmworkers live in houses, apartments or trailers.

Not surprisingly, the rents vary greatly according whether the people live on the coast or in the interior farm regions of California. For example, in our Indigenous Community Survey we found that a typical rent for a family in the coastal areas varied from $400 to $700, while in the Central Valley, indigenous farmworkers pay much more modest rents. They vary from $280 to $350 per month.

The indigenous farmworkers who own their own dwellings are a very small proportion of the overall population and are more likely to reside in the interior regions of the state rather than on the coast. 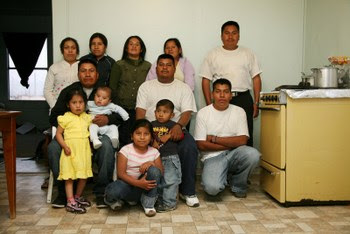 With rents in California's coastal regions often double those in the Central Valley, indigenous farm workers endure conditions of extreme crowding. The 8 adults and 4 children of this extended Mixtec family from Oaxaca live in a two-bedroom apartment on the outskirts of Watsonville. 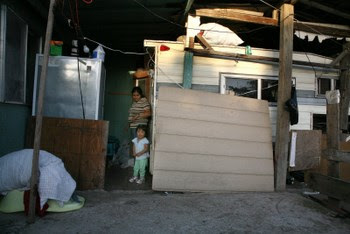 With the high cost of housing in the coastal regions, this Mixtec family cooks and sleeps in a camper in a 'colonia' outside Watsonville. They are part of a sizable community of Mixtecs from San Martin Peras who work in the area's strawberry fields. 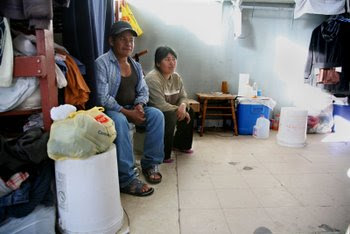 Some farm workers find housing in labor camps, such as this one in the Watsonville area. Most of the workers at this camp are Mixtec and Triqui-speaking migrants from southern Mexico. This couple shares a room with six other people.

Crowding The level of crowding is severe. The U.S. Census Bureau defines crowdedness by the total number of people sleeping in the dwelling divided by the total number of rooms (excluding the kitchen). If there are more than one and a half people (1.5) per room, the dwelling is considered extremely crowded. In the Indigenous Community Survey, we found the typical dwelling far exceeded this level with 1.75 people per room. Two-thirds of the dwellings fell into this category of extremely crowded. By comparison, for California in general, less than one in ten of the residences are extremely crowded. It is common to observe three families with young children living in a small two-bedroom apartment with one of the three families sleeping in the living room. In the survey, a large majority of the renters lived jointly with other families. Often times, people live with their married siblings or families share quarters with their parents.

We found this level of crowding regardless of whether the people lived in houses, apartments or trailers. Surprisingly, crowdedness is not much different for the recent arrivals compared to those with lots of time in the United States. Nor does it vary much between families and men living in all-male housing. It appears that among the indigenous farmworker population all types of households live in "severely crowded" circumstances. However, there are places where the condition is even more extreme. The renters who live along the coast suffer the worse conditions. In the chart below notice that all the coastal regions have much higher levels of crowding than in Bakersfield and Fresno. In Watsonville, the crowding reaches the extraordinary level of 3.0 people per room.

Finally, we found that a big proportion of people are sleeping outside of the bedrooms. In the Indigenous Community Survey, about one person in five slept in a room other than a bedroom mostly in living rooms and in garages. 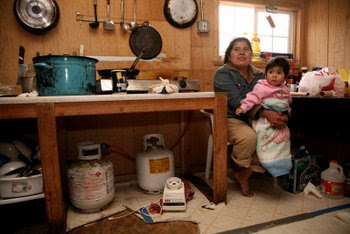 While many indigenous we interviewed were shy or reluctant to complain about living conditions, many expressed concern about inattentive landlords and conditions that pose hazards for children. A Triqui family rents this plywood shack in the fields outside Hollister, to the east of Watsonville.

The indigenous we interviewed for the Indigenous Community Survey had lots of complaints about their living conditions. Despite the fact that many seemed shy about complaining, two out of five listed one or more specific complaint.

One can see in the chart below that the main problem is lack of heating or air conditioning. Next in importance is a leaking roof. Third in significance are plumbing problems followed by people who say that their appliances are not working. Many complained of rats and insect infestation, and many reported that the landlord was inattentive to their complaints (see the chart, below).

Conditions reported by the interviewers 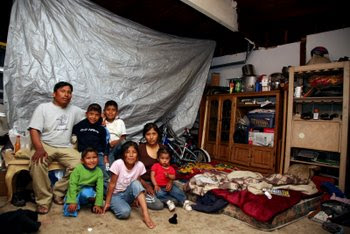 The garages of suburban homes in farm towns throughout California are often converted and rented to farm workers. This Mixtec family, from San Martin Peras in the state of Oaxaca, lives together in a garage on the outskirts of Oxnard. The parents work in the strawberry fields of Ventura county.

Our research team recorded observations during their interviews that give a feeling for the living conditions endured by indigenous immigrants. For example, in Watsonville and Salinas where we recorded the highest rates of crowding, our researchers noted the following:
In Watsonville (Pájaro and Lomas) and Salinas we began interviewing families who live in garages or in small rooms without a kitchen, without a bathroom, without heat and with a single bulb for lighting. These families had to ask permission to use the bathroom and the kitchen, and only according to a set schedule...

We were struck by the lack of material possessions among the families from San Martín Peras. We met families who offered us the only plastic chair they possessed. In that house our interviewer had to conduct the interview while seated on a clothes basket and the interpreter sat on a plastic bucket. The family sat on the floor.

In the crowded Ventura region, our researchers recorded this observation:

In Santa Paula and in Fillmore, in almost all the apartments where we conducted interviews we found several families or several single men living in the same apartment. The families rent a room and the single men rent space on the living room floor.

We interviewed a woman last night who lived in an ordinary-looking 1930s suburban house with a detached garage in back. She informed us that in addition to herself and her two young daughters there were another 38 people living at the address. There were 19 kids, 16 solo males (10 living in the garage), plus 6 women and only one bathroom. The men bathe in back with the garden hose.

Finally, in the Bakersfield region, interviewers observed the following conditions:

While in Taft I interviewed a woman and noted cockroaches moving about on the floor and on the wall behind her. No one mentioned them, nor made any complaints about the apartment. There are three couples living in the apartment. Two couples sleep in the bedroom upstairs and the third couple sleeps in the living room.

We realized there was fear we would discover how many people are living in a house, apartment, and room or garage because people are afraid that if it’s known, someone might come to evict them, i.e. the owner, the manager, the city or some other authority. We were able to speak with the owner of some apartments who told us that he’s found up to 15 people living in a single apartment, but “for security and for their own good” he’s established a rule of a maximum of 10 per apartment.
Posted by Save Marinwood at 6:42 PM