Today’s Tech Oligarchs Are Worse Than the Robber Barons

Today’s Tech Oligarchs Are Worse Than the Robber Barons

Yes, Jay Gould was a bad guy. But at least he helped build societal wealth. Not so our Silicon Valley overlords. And they have our politicians in their pockets. 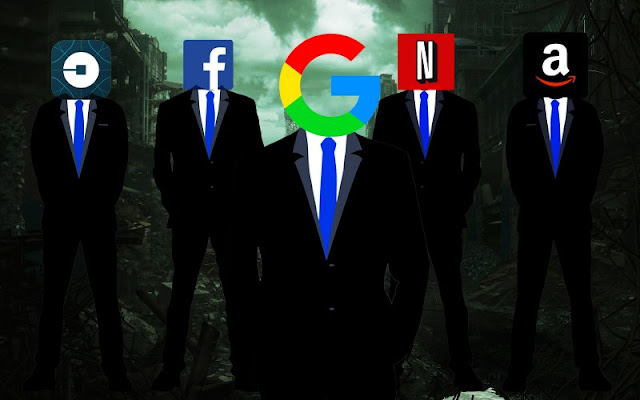 A decade ago these guys—and they are mostly guys—were folk heroes, and for many people, they remain so. They represented everything traditional business, from Wall Street and Hollywood to the auto industry, in their pursuit of sure profits and golden parachutes, was not—hip, daring, risk-taking folk seeking to change the world for the better.
Now from San Francisco to Washington and Brussels, the tech oligarchs are something less attractive: a fearsome threat whose ambitions to control our future politics, media, and commerce seem without limits. Amazon, Google, Facebook, Netflix, and Uber may be improving our lives in many ways, but they also are disrupting old industries—and the lives of the many thousands of people employed by them. And as the tech boom has expanded, these individuals and companies have gathered economic resources to match their ambitions.
And as their fortunes have ballooned, so has their hubris. They see themselves as somehow better than the scum of Wall Street or the trolls in Houston or Detroit. It’s their intelligence, not just their money, that makes them the proper global rulers. In their contempt for the less cognitively gifted, they are waging what The Atlantic recently called“a war on stupid people.”
I had friends of mine who attended MIT back in the 1970s  tell me they used to call themselves “tools,” which told us us something about how they regarded themselves and were regarded. Technologists were clearly bright people whom others used to solve problems or make money. Divorced from any mystical value, their technical innovations, in the words of the French sociologist Marcel Mauss, constituted “a traditional action made effective.” Their skills could be applied to agriculture, metallurgy, commerce, and energy.
In recent years, like Skynet in the Terminator, the tools have achieved consciousness, imbuing themselves with something of a society-altering mission. To a large extent, they have created what the sociologist Alvin Gouldner called “the new class” of highly educated professionals who would remake society. Initially they made life better—making spaceflight possible, creating advanced medical devices and improving communications (the internet); they built machines that were more efficient and created great research tools for both business and individuals. Yet they did not seek to disrupt all industries—such as energy, food, automobiles—that still employed millions of people. They remained “tools” rather than rulers.
With the massive wealth they have now acquired, the tools at the top now aim to dominate those they used to serve. Netflix is gradually undermining Hollywood, just as iTunes essentially murdered the music industry. Uber is wiping out the old order of cabbies, and Google, Facebook, and the social media people are gradually supplanting newspapers. Amazon has already undermined the book industry and is seeking to do the same to apparel, supermarkets, and electronics.
Past economic revolutions—from the steam engine to the jet engine and the internet—created in their wake a productivity revolution. To be sure, as brute force or slower technologies lost out, so did some companies and classes of people. But generally the economy got stronger and more productive. People got places sooner, information flows quickened, and new jobs were created, many of them paying middle- and working-class people a living wage.
This is largely not the case today. As numerous scholars including Robert Gordon have pointed out, the new social-media based technologies have had little positive impact on economic productivity, now growing at far lower rates than during past industrial booms, including the 1990s internet revolution.
Much of the problem, notes MIT Technology Review editor David Rotman, is that most information investment no longer serves primarily the basic industries that still drive most of the economy, providing a wide array of jobs for middle- and working-class Americans. This slowdown in productivity, notes Chad Syverson, an economist at the University of Chicago Booth School of Business, has decreased gross domestic product by $2.7 trillion in 2015—about $8,400 for every American. “If you think Silicon Valley is going to fuel growing prosperity, you are likely to be disappointed,” suggests Rotman.

Editor's Note:  Also, one could include NextDoor Neighborhoods,  who regularly censor people from utilizing the community forum in complete contempt of true neighborly democratic values.  Yours truly was expelled from nextdoor because of manipulations by a small but very vocal intolerant group of people with an authoritarian impulse.
Posted by Save Marinwood at 12:00 PM