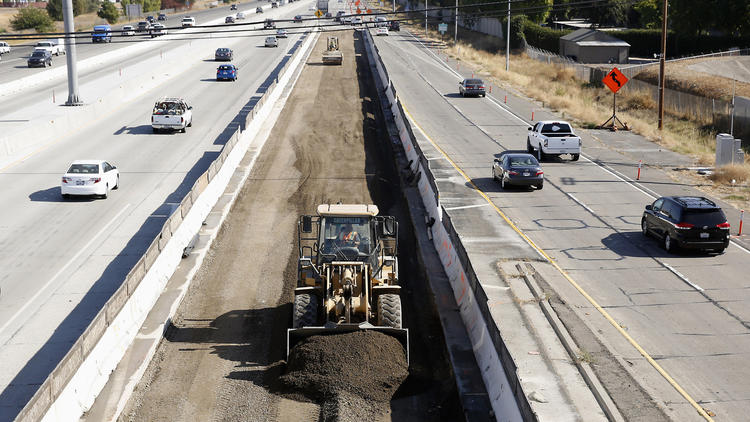 The plan, highlighted by an increase of 17 cents per gallon in the gas tax, comes from Assemblyman Jim Frazier (D-Oakley) and Sen. Jim Beall (D-San Jose) in an attempt to unify the disparate proposals the pair had previously introduced in their respective houses.

The combined plan is more than double Gov. Jerry Brown's $3.6-billion proposal, which calls for a 6-cent gas tax hike.

Last summer, Brown called a special session of the Legislature to highlight the $130-billion backlog in state and local road repairs, as well as the billions more in other transportation budget deficits. But lawmakers have made little progress, especially with gas tax hikes — which would require a bipartisan supermajority vote — on the table.

Republican lawmakers have previously shown little appetite for a tax increase, instead pitching a plan that would eliminate vacant state worker positionsand reallocate existing dollars — including from the state’s climate change programs — toward transportation spending.

Earlier this week, GOP assemblymembers renewed their efforts to focus on transportation funding, starting a social media campaign to highlight the hours Californians spend stuck in traffic each year.

With just two weeks left in the legislative session, Frazier said he was open to calling lawmakers back in a November lame-duck session to resolve transportation funding.

Among other changes and aside from the 17-cents-per-gallon gas tax increase, which would be indexed to inflation, the Frazier-Beall plan also includes:
A diesel tax increase of 30 cents per gallon, also indexed to inflation
$165 annual fee for zero-emission vehicles
The creation of an Office of Transportation inspector general to oversee state spending
Greater environmental streamlining for repairing existing transportation infrastructure

Editor's Note: Looks like more dough is needed for bike trails, light rail and transit oriented development. Cough it up!
Posted by Save Marinwood at 11:22 AM