In 1984 George Orwell describes a totalitarian state that asserted control by redefining language. Advocates for urbanizing Bay Area towns have leveraged these techniques. We need to educate ourselves to cleanly understand the arguments.
Posted by Richard Hall , November 26, 2013 at 12:11 PM

George Orwell wrote 1984 about a totalitarian state that asserted control by appropriating and controlling language - a language called "newspeak". This aspect of 1984 was based on an essay written by Orwell in 1946 entitled "politics and the English language". In the essay Orwell states...

"political language has to consist largely of euphemism, question-begging and sheer cloudy vagueness".

A euphemism is an expression substituted for one considered to be too harsh or blunt when referring to something unpleasant or embarrassing. While we don't necessarily face a totalitarian state (although some readers may disagree with me), we face powerful political groups - developers, planners, transit advocates, social equity groups and HUD-  that have united in a way that is almost as ominous.

Language is one of the tools being used by the fast growth lobby to control the conversation, promoting high density housing and transit oriented development.


Too often we are faced with articles written to convince us that we must do something in the name of sustainability - accept high density housing, use transit instead of driving... In these articles the true intent and meaning is concealed by tools such as euphemisms, disinformation and demonization. To help readers readers understand the true meaning I have devised this tool:

How to Use The Sustainability Spin Decoder:
Simply copy and paste an article, or a few paragraphs from an article and the decoder will convert it to words that allow you to pass better judgement.


Exactly How is Our Language Being Subverted?

Here is a list of just some of the many terms being used to convince us to accept certain policies such as "transit oriented development" and "high density housing".

Sites like the monstrous Win Cup in Corte Madera were approved partly to meet housing quotas for affordable housing - but turn out in reality to be about making profits (Win Cup is almost entirely market rate).

All too often we are sold a story that we need to be more like somewhere else where the grass is greener - like Europe (but focusing exclusively on the good aspects) or America of yesteryear where everyone would enjoy traveling on trains or trolley cars in the golden age of travel.

What is omitted is that Europe has spent vast amounts of public money to build and operate a transit network. Even now fares are very high and often out of reach to those with low incomes enabling true mobility.  Operation places substantial burdens on the state. To achieve any parallel in the US would require significant tax increases making the cost of living less affordable for all.

Remember a euphemism is an expression substituted for one considered to be too harsh or blunt when referring to something unpleasant or embarrassing.

Transit Oriented Development (Glittering Generality) = Systematic Urbanization
Transit oriented development is heralded as the progressive future, but little evidence is produced to substantiate this approach. For instance the fact that transit usage has been in decline in our region despite massive increases in investment is conveniently dismissed. The fact that cars are the preferred form of transportation for many journeys, and that they are cleaner (lower emissions per passenger mile) than transit on all but the most popular transit lines is dismissed. Rather the car and it's tailpipe emissions are demonized.

This sells the half truth that new housing will contain a high proportion of residents that will live nearer to their work, reducing greenhouse gas emissions.
In reality:
- little or no control can be imposed over where the residents work (E.g. there is no criteria eliminating applicants who would extend their commutes)
- there is rarely any study to analyze if this is achieved (when the LA Times conducted such a study in 2007 they thoroughly demolished the myth of workforce housing)
The reality is that such housing may cause people to extend their commutes, or simply have no such impact, yet it may impose substantial costs, congestion and parking issues.

Open Up the Waterfront (Big Lie, Misinformation) = Close Off with High Rises

The biggest lie that was well spotted by residents was the attempt to build high density housing across the San Francisco waterfront at Embarcadero.  Luckily San Francisco voters saw right through this masquerade.

Sustainable (Glittering Generality) = Superior Based on Rules We Made Up

While there are many that use this term correctly, there are a sizable number that use it as a method of convincing others that their approach is superior, and it is not to be questioned.

Community Outreach (Obfuscation) = Obtaining the Appearance of Community Support
ABAG and MTC like to state that Plan Bay Area had over 250 community meetings to collect community input - but what is omitted and obfuscated is that most of those meetings were attended by a sizable number of vocal opponents. Many supporters of PBA were organizations that received money (patronage) and contracts, and shaped the plan before community input truly began.

Vibrant describes a positive state but typically there is no concrete argument or analysis or definition of this end state. As such it is a gross oversimplification. For instance it is often stated that transit oriented development helps town centers become "more vibrant". What they may intend is "there will be more business as there will be more people walking around".

However it would be easy to argue that improving access to cars through improved roads and parking may be much more likely to achieve such an effect.  Just look at the success of malls. This Washington Post article explains the quandary well ultimately surmising that a big box store like Target with car parking in a town center is what drives shoppers.


Our Ability to Judge is Being Removed


Ultimately this double-speak is removing the ability for many of us to make an accurate judgment.  The judgement is being made for us and built into convincing words.

This is an intellectual travesty. We need to have conversations about the reality.


Thankfully George Orwell left us with a 6 point approach to solving the issue:1. Never use a metaphor, simile, or other figure of speech which you are used to seeing in print.
The majority of the times that these types of phrases are being used, they are being used without the knowledge of what is truly being said. By using these techniques the phrases are rendered meaningless. I would say that the following terms fall into this category: smart, sustainable...2. Never use a long word where a short one will do.
Orwell describes"Pretentious diction" and "Meaningless Words". He cites “romantic, plastic, values, human, [and] dead” stating  “they not only do not point to any discoverable object, but are hardly even expected to do so by the reader”. Here I would point to: vibrant, workforce housing, social equity...

3. If it is possible to cut a word out, always cut it out.
E.g. Smart growth = growth. Smart train = train.

4. Never use the passive where you can use the active.

5. Never use a foreign phrase, a scientific word, or a jargon word if you can think of an everyday English equivalent.
Of all the rules this is where we are being bombarded the most with jargon like:
- transit oriented development
- walkable communities (I can walk 10 minutes and get to shops and cinema right now, but apparently it's not walkable enough)
- Priority Development Areas - areas marked for intensive urbanization
- workforce stabilization
Orwell's condemns such "grand phrases".

6. Break any of these rules sooner than say anything outright barbarous.
Orwell's last rule means that the writer should break the previous rules when necessary for a proper sentence. The writer should not use the English language to manipulate or deceive the reader.

There are many good people working to fight climate change. I for one see the need. We need to be having the right conversations following Orwell's rules, not using propaganda techniques.

We can have fact-based undistorted conversations, we can fight climate change and recognize that there are cost effective, market based transportation solutions that don't necessarily need us to make radical shifts to high density or transit. As mentioned in my prior article - car and highway technology is rapidly changing, and the car offers a degree of convenience that is hard for transit to beat. And we do need to be providing transportation ensuring that those with low incomes are provided opportunity. Achieving these objectives should occur based on truth in conversation. 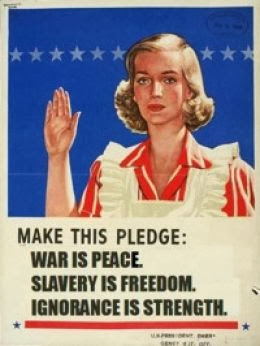