The end of single-family zoning in California?

The end of single-family zoning in California?: Susan Shelley 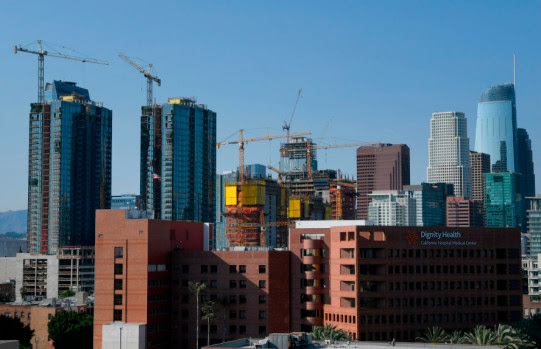 By Susan Shelley | letters@ocregister.com | Orange County Register
PUBLISHED: October 19, 2019 at 10:56 am | UPDATED: October 19, 2019 at 10:56 am
Over the objections of city officials throughout the state, Gov. Gavin Newsom signed a bill that effectively ends single-family zoning in California.
It wasn’t Senate Bill 50, the proposal to allow apartment buildings to be built on single-family lots in any area that’s within one-half mile of public transit. That stalled in the Legislature amid fears that Californians would rise up as one and pull the plug on transit projects throughout the state.
Instead, the governor ended single-family zoning by signing Assembly Bill 68, which creates a right to build two new units of rental housing on any single-family lot in California, for a total of three units of housing where only one may have been allowed by the local government in the past.
AB68 prohibits cities from prohibiting it. The new law also takes away a city’s power to impose conditions such as parking requirements. It prevents cities from imposing size and setback requirements for the new construction if those conditions would be more restrictive than the state law.

This law was presented as an expansion of another state law that created a right to build accessory dwelling units, also known as ADUs, granny flats, in-law suites and garage conversions. That law allowed one unit. This law allows two.
That must be very exciting for a company such as Invitation Homes, Inc., traded on the New York Stock Exchange under the ticker symbol INVH. Recently the investor newsletter www.simplywall.st pronounced the company’s return on equity “sub-optimal” compared to the average in its industry classification.
Invitation Homes is one of the companies in the business of buying and renting out single-family homes. Some of the others are American Homes 4 Rent, Progress Residential, Main Street Renewal, and Tricon American Homes. This is a growing industry that has its origins in the financial crisis of 2008, which was tied to foreclosures on homes. Investors scooped up single-family homes when the prices were very depressed.
At that time, sub-prime mortgages had been packaged together by investment bankers and slices of them were sold as investment vehicles. They were highly rated as safe on the theory that even if the borrowers had bad credit, all the properties wouldn’t go into foreclosure at the same time.
And then they did, and it almost brought down the world financial system.
The companies that own single-family houses to rent them out are similarly “securitizing” the homes. Bonds and Real Estate Investment Trusts (REITs) backed by single-family rental homes are now a thing on Wall Street.
So the neighbors of a California home owned by one of these corporate landlords can expect the construction to start immediately. Companies, especially publicly traded companies, will do whatever is allowed to maximize revenue. Gov. Newsom has just allowed them to build three rental units on a single-family lot.
What consequences can we expect from AB68? We can expect the prices of homes to be pushed higher in a bidding war for these increasingly lucrative investment properties.
We can expect mass evictions of people who are living in unpermitted garage conversions and backyard structures, as property owners take advantage of their new right to remodel and lease these spaces at market rates. We can expect a near-violent reaction from people who lose the quiet enjoyment of their homes to the noise and congestion of tripled occupancy on their street.
A lot of people who live in homes they own have busted their anatomy to buy those homes and continue to work hard to keep them. They’re not going to appreciate this at all.
We can also expect more short-term rentals, as companies such as Airbnb court homeowners with the prospect of extra income from two — count ‘em, two! — vacation rentals on their very own property.
In some cities, that may be a minor annoyance, and in others, it will be a catastrophe.
Another concern is infrastructure. What’s going to happen to water, power and sewer infrastructure when the occupancy of single-family lots triples? Here’s a prediction: new demands for tax hikes and decades-long projects that dig up the streets.
Why is the state government dictating this policy to cities? The reason given is that the cities aren’t building enough housing.

But who should make that call? And what does the California Constitution say about it?

We may find out. If you object to AB68, call your city council representative or county supervisor, or both, and ask if they’re planning to file a lawsuit over AB68.
Another way to address the issue is through the ballot. It’s possible that AB68 will cause such outrage throughout the state that an initiative will be filed to reverse it, or even to amend the California constitution to protect cities, and homeowners, from Sacramento’s fashionable planning ideas.
The law of unintended consequences has been triggered. This won’t be pretty.
Susan Shelley is an editorial writer and columnist for the Southern California News Group. Susan@SusanShelley.com. Twitter: @Susan_Shelley.

Posted by Save Marinwood at 5:09 PM