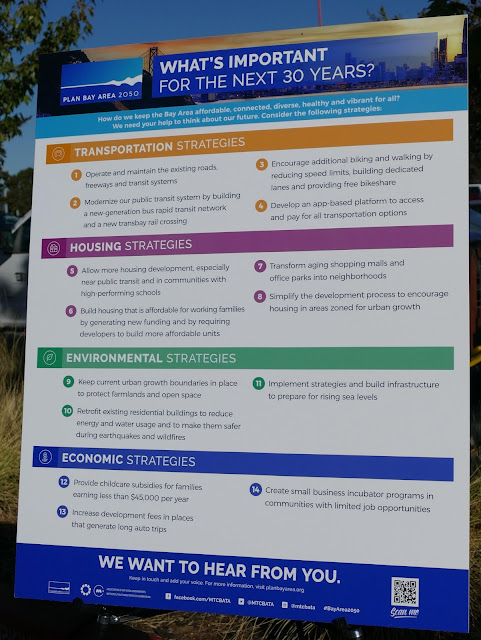 I had a nice talk with MTC staff about Plan Bay Area 2050.  When I arrived they were working the crowd with leading questions, writing down notes to past on the board and give out gifts promoting regional government.  It is a ridiculous show of government hubris that they think they can effectively plan for a thirty year horizon.  The Soviet Union only had 5 year plans and missed every one.  Now the "geniuses" at MTC want to have us believe that a wonderful world awaits us if we allow them to plan for our future and give them billions of dollars.
I asked why they think Napa is better off sending tax dollars to MTC instead of spending it locally.  After all, doesn't the local community know best about its needs? (no answer) I also pointed out that the reality is that strong politicians will dominate the process and the weaker counties will lose money to the powerful.   She admitted as much.  She loved former Marin Supervisor Steve Kinsey, who did not run for re-election after he abused his position on the California Coastal Commission.    She did not think much of Marin County since they have voiced opposition to regionalism.
Plan Bay Area is a farce and a cynical ploy to control vast political and economic resources.  They are promising us all lollipops and rainbows if we just agree to "go along for the ride"

Video includes clips plus the full Plan Bay Area Sales Pitch where I "won" a tote bag tp "Be Regionable".
Posted by Save Marinwood at 5:32 PM