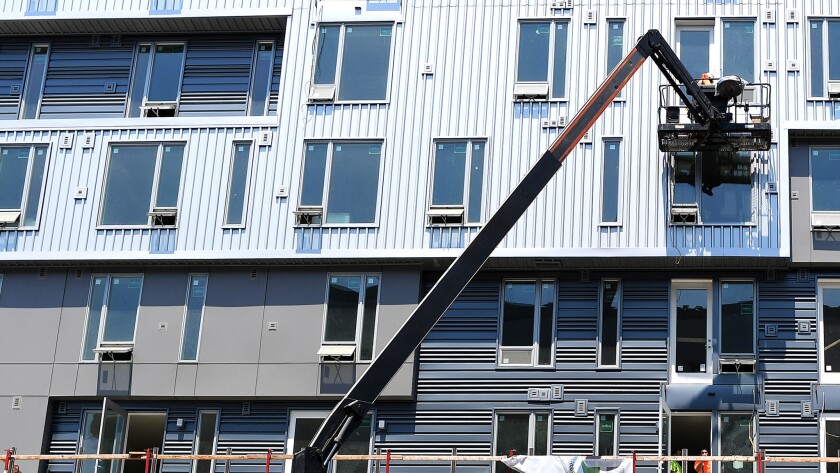 But the real question was whether the governor would stand firm when faced with the inevitable slow-growth, anti-development pushback from local governments.

This week, he did.

His administration decided that cities and counties in Southern California will have to plan for the construction of 1.3 million new homes in the next decade, Times reporter Liam Dillon reported Thursday. That number is more than three times larger than what local elected officials had wanted to commit to.


By overruling Southern California leaders’ recommended construction target, Newsom made clear that his administration is going to be far more aggressive in requiring cities and counties to make room for new housing.

The housing target set by the Department of Housing and Community Development is required under the state’s “fair-share” housing law, which instructs cities and counties to plan and zone every eight years for enough development to house their proportion of the state’s growing population. Cities aren’t required to build the homes — that’s up to the private sector — but they have to plan and zone for them.

For decades, some local governments have looked for ways to shirk that responsibility, bending to complaints from NIMBY groups that want to minimize traffic, discourage development and preserve the region’s low-slung suburban character. That’s one reason California is in a deep housing shortage that is fueling poverty, displacement and homelessness.

At the heart of the “fair share” process is the estimate each community makes for how much housing it needs. A higher number means cities have to zone for more housing, factoring in the need for affordable units as well as market-rate ones.


In June, the board of the Southern California Assn. of Governments, which is composed of city and county elected officials from across the region, voted for the woefully low number of 430,000 homes by 2029. Housing advocates and some regional leaders, including Mayor Eric Garcetti, complained that such a low-ball target wasn’t enough to help ease the housing shortage that is driving up rents and housing prices.

The Newsom administration heeded those complaints and, fortunately, the state sets the target. And although 1.3 million new homes in Southern California between 2021 and 2029 is an ambitious target, it’s still less than some advocates and experts say is necessary.

That works out to about 162,000 new units a year across the SCAG region, which is home to half the state’s population. The entire state of California has averaged only 80,000 new homes a year over the last decade. But state law demands an ambitious target both to address the existing shortage created by decades of insufficient construction and to meet the needs of the growing population.

By the way, the fight over the region’s total housing-need number is probably nothing compared to the coming battle royal over how to divvy up that number. SCAG is now developing the methodology to assign cities their fair-share allocation, including how many affordable homes they need to plan for. Cities will then be required to identify properties that could accommodate such housing developments.

Housing advocates are pushing SCAG to assign most of the new housing to coastal urban centers, where there are jobs and more extensive transit systems — and where housing costs have skyrocketed. These are also the areas that tend to fight density and new development most vociferously.

All of this is probably going to intensify the fight in Sacramento between state lawmakers who want to push cities to approve more home construction and city and county elected leaders who don’t want to cede any local control over housing decisions.

Local officials may not have been paying close attention two years ago when state lawmakers began passing bills to add teeth to the fair-share housing law. They’re paying attention now. But they’ve got to contend with a governor who is increasingly pushing cities to say, “Yes in my backyard.”

Editor's Note:  Let these writers and housing activists call us NIMBYs.  Anyone drive in downtown San Francsico, Sacramento, Los Angeles or San Diego recently?  Let these writer's tell us that we are to blame for the homeless crisis.  Let THEM defend their policy solutions with FACTS.
Posted by Save Marinwood at 12:00 AM