A big idea in Minneapolis points the way for other cities desperately in need of housing.


By The Editorial Board


The editorial board represents the opinions of the board, its editor and the publisher. It is separate from the newsroom and the Op-Ed section.
June 15, 2019

A new apartment complex being built next to a single-family home in South Minneapolis.CreditBrooklynn Kascel for The New York Times 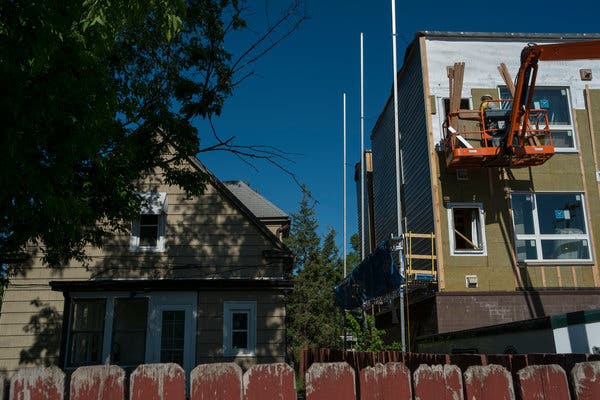 A new apartment complex being built next to a single-family home in South Minneapolis.CreditCreditBrooklynn Kascel for The New York Times


Housing is one area of American life where government really is the problem. The United States is suffering from an acute shortage of affordable places to live, particularly in the urban areas where economic opportunity increasingly is concentrated. And perhaps the most important reason is that local governments are preventing construction.

Don’t be misled by the construction cranes that punctuate city skylines. The number of housing units completed in the United States last year, adjusted for the size of the population, was lower than in any year between 1968 and 2008. And the problem is most acute in major urban areas along the east and west coasts. Housing prices, and homelessness, are rising across the country because there is not enough housing.

Increasing the supply of urban housing would help to address a number of the problems plaguing the United States. Construction could increase economic growth and create blue-collar jobs. Allowing more people to live in cities could mitigate inequality and reduce carbon emissions. Yet in most places, housing construction remains wildly unpopular. People who think of themselves as progressives, environmentalists and egalitarians fight fiercely against urban development, complaining about traffic and shadows and the sanctity of lawns.

That’s why a recent breakthrough in Minneapolis is so important. The city’s political leaders have constructed a broad consensus in favor of more housing. And the centerpiece is both simple and brilliant: Minneapolis is ending single-family zoning.


Local governments regulate land use by chopping cities into zones, specifying what can be built in each area. This serves some valuable purposes, like separating homes from heavy industry. But mostly, it serves to protect homeowners. In many cities, including Minneapolis, more than half of the city’s land is reserved for single-family homes.  See full Article HERE.

Read the comments after the article.  Here is an excellent response:

Aaron
USAJune 16
Times Pick
I live in Minneapolis. I'm a millennial. I own my home. I oppose this plan completely. There is a large segment of our city that is very affordable, but it's in the black community and the crime rate is high so few want to move there. I'll let you draw your own conclusions on what motivates people in this instance. Speaking of our community members of north Minneapolis -- they asked the council to make major financial investments in their community to make it nicer. The council decided to upzone their homes instead. Who stands to gain from that? There was only one councilperson who voted against airbnb in Minneapolis. That's your government voting against your own interests, Linnea Goderstad, since the council decided it's legal for investors to buy housing stock and airbnb it for profit. Yet she villifies older single family home owners... That photo of Ms Goderstad is in downtown east next to the Minnesota Viking's new billion dollar stadium, which was half paid for through state funds and a sales tax hike on people buying food, alcohol, and lodging downtown. There are homeless people camping in its shadow. Middleclass, older single family home owners are the problem with housing affordability, though, not politicians who give away a half a billion to a sports franchise. Coincidently, my mass transit stop is at the stadium, so I've seen the dense housing stock spring up since I work in a highrise downtown. Very little of it would be considered affordable. Just absurd
Posted by Save Marinwood at 12:00 AM