The Golden State’s New Eminent-Domain Temptation
A California bill would make it easier for local governments to seize homes and small businesses. 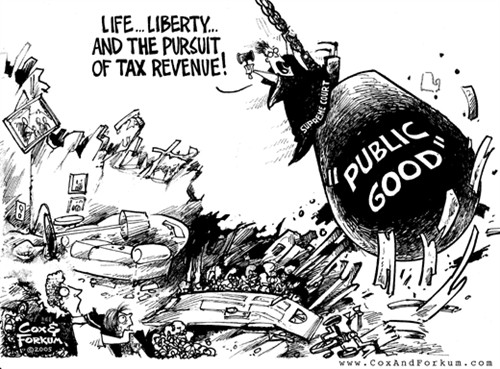 When the U.S. Supreme Court ruled that Susette Kelo’s little pink house in New London, Conn., could be seized with eminent domain, its decision ignited a political firestorm. Practically everyone in the nation was outraged, with Kelo v. City of New London uniting figures as diverse as Bernie Sanders and Rush Limbaugh in opposition. In the years since, 44 states have reformed their eminent-domain laws.
But as time went by and memories began to fade, lawmakers pounced to undo those reforms. In California, a bill is now on Governor Jerry Brown’s desk that could unleash a new wave of eminent-domain abuse across the state.

After years of abuse, California dissolved its infamous redevelopment agencies (RDAs) in 2012. This reprieve for property rights, however, was short-lived. Last year, lawmakers decided to revive redevelopment under a new program, allowing municipalities to establish “community revitalization and investment authorities,” or CRIAs. Like the redevelopment agencies from before, CRIAs can siphon property-tax revenue away from infrastructure projects and instead funnel those funds to their own schemes. Appallingly, California law also grants these authorities the power of eminent domain to seize private property.

In August, state lawmakers approved a bill, AB 2492, that would make it even easier to create a CRIA. The consequences could be absolutely dire. One analysis by Andrew Chang and Company estimates that if the bill is enacted, a staggering 78 percent of California’s landmass could be threatened with condemnation, including 23 entire counties and 188 cities in whole. To put that figure into perspective, if that combined area were a state, it would constitute the seventh largest state in the U.S.

Bizarrely, many California icons could be affected by this seemingly minor tweak. The Ritz-Carlton in San Francisco, Rodeo Drive in Beverly Hills, and the Boardwalk in Santa Cruz would all be “vulnerable to redevelopment,” Andrew Chang and Company reported.
Even if municipal governments decide against condemning homes and businesses in more prosperous neighborhoods, those high-value properties could be included in a CRIA. That would allow municipalities to fund bond increments, which in turn, “could amount to potentially billions of dollars statewide.”

Another change by AB 2492 would let municipalities juke the stats. Currently, to create a CRIA, an affected area must have a crime rate higher than the statewide median crime rate. But under the bill, local governments could use either the average crime rate for violentor property crimes, as opposed to one fixed number.

Tellingly, no other state in the nation uses the methodology in AB 2492, according to the California Alliance to Protect Private Property Rights. By further loosening the ability to create CRIAs, California lawmakers are poised to return the state to the bad old days of redevelopment. Initially limited to combating urban blight, redevelopment ultimately ballooned to a boondoggle that wasted billions of dollars in taxpayer money. In 2011, their final year before dissolution, hundreds of redevelopment agencies received $5 billion in revenue, or 12 percent of the state’s property taxes.
By comparison, RDAs received more property taxes than “all of the state’s fire, parks, and other special districts combined” and cost “the state’s General Fund about as much as the University of California or California State University systems,” according to one report by the Legislative Analyst’s Office (LAO), the nonpartisan California agency that provides fiscal advice to the state legislature. In some counties, redevelopment agencies even collected more than 25 percent of all property-tax revenue.

When Justice Sandra Day O’Connor dissented in Kelo, she was remarkably prescient about its impact: “Nothing is to prevent the State from replacing any Motel 6 with a Ritz-Carlton, any home with a shopping mall, or any farm with a factory.”

Those words were supposed to be a warning, not an instruction manual.

— Nick Sibilla works at the Institute for Justice, which litigated the Kelo case.
Posted by Save Marinwood at 8:51 PM