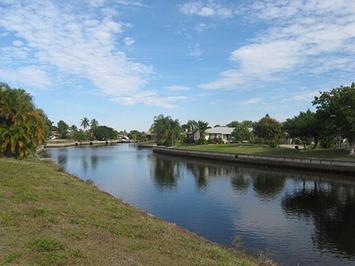 The flight from the nation’s major metropolitan area core counties increased 60 percent between 2015 and 2016, according to just-released estimates from the US Census Bureau (Note). A total of 321,000 more residents left the core counties than moved in, up from 199,000 in 2015. This is ten times the decade’s smallest domestic migration loss of 32,000 for the same counties which occurred in 2012.
Suburban counties continued to attract net domestic migrants, at a somewhat higher rate than in recent years and much higher than in the early part of the decade. The suburban counties gained 235,000 domestic migrants in 2016, compared to 224,000 in 2014 and more than double the low point of 113,000 in 2011 (Figure 1).

The 60 percent rise in net domestic migration out of the core counties converts to a 0.4 percent annual loss relative to last year’s population. This loss is more than one-half the annual growth rate of only 0.7 percent. This is a substantial deterioration from the net domestic migration loss in 2012 of 0. 04 percent, which was only 1/25th of the 1.1 percent growth rate for the core counties. 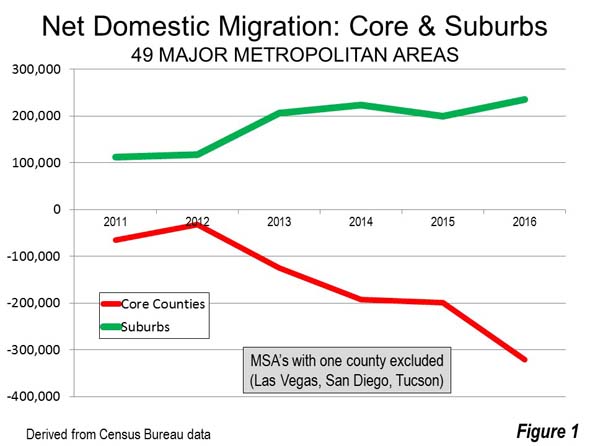 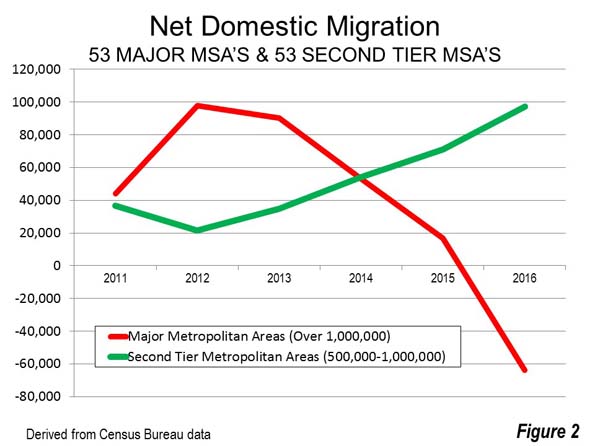 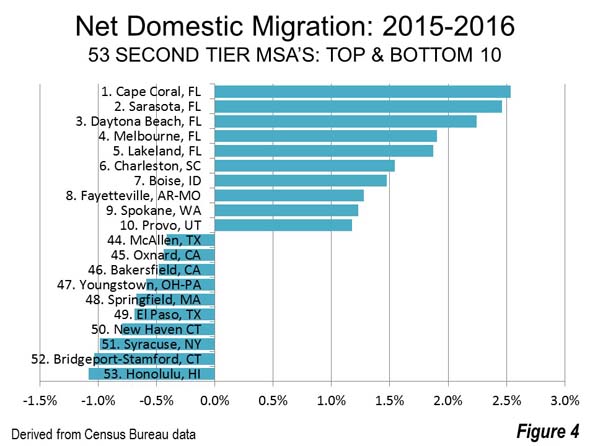 Population Rankings and Trends
Again, New York, Los Angeles, Chicago, Dallas-Fort Worth and Houston were the largest. They were followed by Washington (which passed Philadelphia last year), Philadelphia, Miami, Atlanta and Boston. There was no change in the rankings of the top 22 major metropolitan areas. Portland dropped two notches, from 23rd to 25th largest, as both Orlando and San Antonio jumped ahead. Austin jumped 2 positions, passing both Cleveland and Columbus, becoming the 31st largest metropolitan area. Finally, Raleigh passed Louisville to become the 43rd largest metropolitan area. The table at the end of the article includes information on the 106 largest metropolitan areas.
The population growth rates for both the major and second tier  metropolitan area leaders and trailers looks similar to the domestic migration rankings (Figures 5 and 6). Austin leads the majors and Cape Coral leads the large metropolitan areas. There are greater differences in the bottom ten, where some of the largest domestic migration losers (such as New York, Los Angeles and Chicago) attract strong international migration have been replaced by others that attract fewer, and tend to have lower population growth rates as a result. 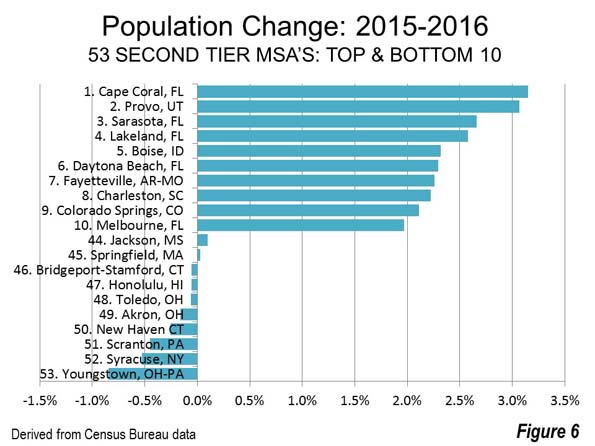 More Major Metropolitan Areas?
Meanwhile, some metropolitan areas should soon pass the 1,000,000 mark. Honolulu has been at the top of the list for some time. If the annual growth rates from 2010 to 2013, 2014 or 2015 had been sustained, Honolulu would have reached a million by 2016. But, Honolulu’ growth rate has slowed substantially in each of the last years since 2012, culminating in a modest population loss in 2016, leaving Honolulu 7,000 short of a million. Current growth rates suggest that Tulsa and Fresno could get to a million before Honolulu.
Reason For Concern
While the domestic migration data has long since disproven any thesis of a general movement of people from the suburbs to the urban core, the escalation in core county domestic migration losses is cause for concern.
The urban cores are far nicer places than they were before. But their recovery has been all too concentrated ; meanwhile the rings around trendy downtown residential areas continue, as before the micro-core renaissance, to suffer serious poverty levels and other social ills more intensely than elsewhere. We have been down a similar road before, and have never recovered from the serious costs.
Note: Major metropolitan areas have more than 1,000,000 population. The domestic migration comparison between core and suburban counties is limited to 50 of the 53 metropolitan areas, because four have only one county (Las Vegas, San Diego and Tucson). The lowest geographical level at which domestic migration data is available is counties. The core counties are often so large that they include large suburban components. This makes for a more crude comparison than would be the case if more precise data were available.


Wendell Cox is principal of Demographia, an international public policy and demographics firm. He is a Senior Fellow of the Center for Opportunity Urbanism (US), Senior Fellow for Housing Affordability and Municipal Policy for the Frontier Centre for Public Policy (Canada), and a member of the Board of Advisors of the Center for Demographics and Policy at Chapman University (California). He is co-author of the "Demographia International Housing Affordability Survey" and author of "Demographia World Urban Areas" and "War on the Dream: How Anti-Sprawl Policy Threatens the Quality of Life." He was appointed to three terms on the Los Angeles County Transportation Commission, where he served with the leading city and county leadership as the only non-elected member. He served as a visiting professor at the Conservatoire National des Arts et Metiers, a national university in Paris.
Photo: Coral Gables Florida (MSA), largest domestic migration and population gain of any metropolitan area over 500,000 population, 2015-2016 (by author)

Posted by Save Marinwood at 7:56 PM