Editor's Note:  Although Marinwood CSD is currently replacing the sodium halide streetlights with LED streetlights for dramatic energy savings, we have no reason to suspect that they will have this technology here.  Still the fact that this technology is in use in a free society, it is worthwhile to consider the impacts on our liberty. For us, this is a chilling reminder of Orwell's "Big Brother" and  dangers of a omniscient powerful central government. They already are installing license plate readers on the Golden Gate bridge and the highways...

In the Netherlands city of Eindhoven, the streetlights lining a central commercial strip will glow red if a storm is coming. It's a subtle cue that harkens back to an old phrase about a red sky warning mariners that bad weather is on the way. The automated color change is possible because satellite weather data flows over a network to tiny processors installed inside the lampposts, which are linked by an integrated wireless system.

Lighting hues reflecting atmospheric changes are only the beginning of myriad functions these so-called "smart streetlights" can perform. Each light has something akin to a smartphone embedded inside of it, and the interconnected network of lights can be controlled by a central command center.
Since they have built-in flexibility for multiple adaptations, the systems can be programmed to serve a wide variety of purposes. Aside from merely illuminating public space, possible uses could include street surveillance with tiny cameras, monitoring pedestrian or vehicle traffic, or issuing emergency broadcasts via internal speaker systems.

The smart streetlights aren't just streetlights — they're data collection devices that have the potential to track anything from pedestrian movements to vehicle license plate numbers. And, through a curious process distinctly lacking in transparency, these spylights are on their way to San Francisco.

So far, the implications of using this technology for such wide-ranging objectives have barely been explored. "San Francisco thought they were upgrading their 18,000 lamps with LEDs and a wireless control system, when they realized that they were in fact laying the groundwork for the future intelligent public space," LLGA cofounder Sascha Haselmeyer stated in an interview with Open Source Cities. "Eindhoven is pioneering this with ... completely new, intelligent lighting concepts that adapt to the citizen not just as a utility, but a cultural and ambient experience. So many questions remain," he added, and offered a key starting point: "Who owns all that data?"

Phillips Lighting, which was involved in installing the Eindhoven smart streetlights system, played a role in launching the San Francisco pilot. Paradox Engineering recently opened a local office. Oracle, a Silicon Valley tech giant, is also involved — even though it's not a lighting company.
"Oracle, of course, manages data," Haselmeyer explained to the Guardian when reached by phone in his Barcelona office. "They were the first to say, 'We need to understand how data collected from lampposts will be controlled in the city.'"

According to a press release issued by Paradox Engineering, "Oracle will help managing and analyzing data coming from this ground-breaking system." Oracle is also a corporate sponsor of the LLGA program. It has been tangentially involved in the pilot project "because of a longstanding relationship we had with the city of San Francisco," Oracle spokesperson Scott Frendt told us.
Paradox was selected as the winner for San Francisco's "sustainability challenge" through LLGA, which is now housed under CityMart.com, "a technology start-up offering a professional networking and market exchange platform," according to the company website.

In May of 2012, the SFPUC sent one of its top-ranking officials, Assistant General Manager Barbara Hale, to Rio for the LLGA awards summit. There, technology vendors of all stripes showcased their products and mingled with local officials from Barcelona, Cape Town, Glasgow, Fukuoka and other international cities. San Francisco was the only US city in attendance. San Francisco will even host the next summit this coming May at Fort Mason.

In Rio, Paradox was lauded as the winning vendor for San Francisco's LLGA streetlights "challenge." It didn't take long for the company to hit the ground running. "Soon after the Rio Summit on Service Innovation in Cities, where we were announced winners for San Francisco, we started discussing with the SFPUC the objectives and features of the pilot project," Paradox announced on the LLGA website. "Working closely with the SFPUC, we also had the opportunity to build solid partnerships with notable industry players such as Philips Lighting and Oracle."

On Nov. 15, Paradox hosted an invite-only "networking gala" titled "Smart Cities: The Making Of." The event brought together representatives from Oracle, the SFPUC, Phillips, LLGA, and the Mayor's Office of Civic Innovation, "to learn about the challenges of urban sustainability in the Internet of Things era," according to an event announcement.

"The project we're piloting with the SFPUC is highly innovative since it puts into practice the new paradigm of the 'Internet of Things,' where any object can be associated with an IP address and integrated into a wider network to transmit and receive relevant information," Gianni Minetti, president and CEO at Paradox, stated in a press release. 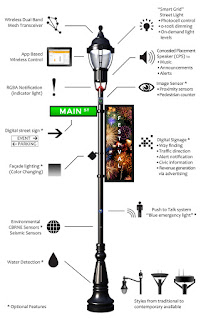 The event was also meant to celebrate Paradox's expansion into the North American urban lighting space, a feat that was greatly helped along by the LLGA endeavor. But how did a Swiss company manage to hook up with a San Francisco city agency in the first place — and win a deal without ever going through the normal procurement process?

To find the right fit for San Francisco's wireless LED streetlights "challenge" under the LLGA program, a judging panel was convened to score more than 50 applicant submissions received through the program framework. Judges were selected "based upon knowledge and contacts of people in the SFPUC Power Enterprise," Tienken explained. The scoring system, Haselmeyer said, measures sustainability under a rubric developed by the United Nations.

Jurists for San Francisco's streetlight program were handpicked from the SFPUC, the San Francisco Department of Technology, Phillips, and several other organizations. An international jurist is designated by LLGA for each city's panel of jurists, Haselmeyer said, "so as to avoid any kind of local stitch-up."

He stressed that "the city is explicitly not committing to any procurement." Instead, vendors agree to test out their technology in exchange for cities' dedication of public space and other resources. Tienken, who manages the city's LED Streetlight Conversion Project, noted that "Paradox Engineering is not supposed to make a profit" under the LLGA program guidelines. "We'll pay them a $15,000 stipend," she said, the same amount that will be awarded to the firms that are now in negotiation for pilot projects of their own.

"San Francisco is using this to learn about the solution," Haselmeyer added. "This company will not have any advantage," when it comes time to tap a vendor for the agency's long-term goal of upgrading 18,500 of its existing streetlights with energy-saving LED lamps and installing a $2 million control system.

At the same time, the program clearly creates an inside track — and past LLGA participants have landed lucrative city contracts. Socrata, a Seattle-based company, was selected as a LLGA winner in 2011 and invited to run a pilot project before being tapped to power data.SFgov.org, the "next-generation, cloud-based San Francisco Open Data site" unveiled by Mayor Ed Lee's office in March of 2012.

The mayor's press release, which claimed that the system "underscores the Mayor's commitment to providing state of the art access to information," made no mention of LLGA.

Throughout this process of attending an international summit in Rio, studying applications from more than 50 vendors, selecting Paradox as a winner, and later issuing an RFP, a very basic question has apparently gone unaddressed. Is a system of lighting fixtures that persistently collects data and beams it across invisible networks something San Franciscans really want to be installed in public space?
And, if these systems are ultimately used for street surveillance or traffic monitoring and constantly collecting data, who will have access to that information, and what will it be used for? Haselmeyer acknowledged that the implementation of such a system should move forward with transparency and a sensitivity to privacy implications.

"Many cities are deploying sensors that detect the Bluetooth signal of your mobile phone. So, they can basically track movements through the city," Haselmeyer explained. "Like anything with technology, there's a huge amount of opportunity and also a number of questions. ... You have movement sensors, traffic sensors, or the color [of a light] might change" based on a behavior or condition. "There's an issue about who can opt in, or opt out, of what."

Tienken and Sheehan downplayed the RFP's reference to "street surveillance" as a potential use of the wireless LED systems, and stressed that the pilot projects are only being used to study a narrow list of features. "The PUC's interest is in creating an infrastructure that can be used by multiple agencies or entities ... having a single system rather than have each department install its own system," Tienken said. The SFPUC is getting the word out about the next batch of pilots by reaching out to police precinct captains and asking them to announce it in their newsletters, since "streetlighting is a public safety issue," as Tienken put it.

Haselmeyer acknowledged that public input in such a program is important: "It's very important to do these pilot projects, because it allows those community voices to be heard. In the end, the city has to say, look — is it really worth all of this, or do we just want to turn our lights on and off?"


LIGHTS, BUT NO SUNSHINE

One company that is particularly interested in San Francisco pilot is IntelliStreets, a Michigan firm that specializes in smart streetlights. IntelliStreets CEO Ron Harwood told the Guardian that his company was a contender for the pilot through LLGA; he even traveled to Rio and delivered a panel talk on urban lighting systems alongside Hale and a representative from Oracle.

A quick Google search for IntelliStreets shows that the company has attracted the attention of activists who are worried that these lighting products represent a kind of spy tool, and a spooky public monitoring system that would strip citizens of their right to privacy and bolster law enforcement activities.

"It's not a listening device," Harwood told the Guardian, when asked about speakers that would let operators communicate with pedestrians, and vice-versa. "So you can forget about the Fourth Amendment" issues.

Harwood seemed less concerned about the activists who've decried his product as a modern day manifestation of Big Brother, and more worried about why his company was not chosen to provide wireless LED streetlights in San Francisco. After being passed over in the LLGA process, Harwood said IntelliStreets responded to the RFP issued in the weeks following the Rio summit. Once again, Harwood's firm didn't make the cut.

Since his company provides very similar services to those described in the RFP, Harwood said he was "confused" by the outcome of the selection process. IntelliStreets' Chief Administration Officer Michael Tardif was more direct. "Clearly we think this was an inside deal," Tardif told the Guardian. Tienken, for her part, declined to discuss why San Francisco had rejected IntelliStreets' application.
And when a public records request was submitted to the agency last August for details on San Francisco's participation in LLGA, the response was opaque at best. "After a duly diligent search we find that there are no documents responsive to your request," an SFPUC public records coordinator responded via email. "The San Francisco Public Utilities Commission is not a participant, nor is involved with Living Labs Global Award. Please know that we take our obligations under the Sunshine Ordinance very seriously." That was just an honest mistake, Sheehan tells the Guardian now by way of explanation. In the public records division, "Clearly, nobody had any familiarity with LLGA."
Posted by Save Marinwood at 9:53 PM