Three Los Angeles Fire Department (LAFD) employees earned a combined $1.36 million last year — $974,779 of which came from overtime pay alone, according to just-released 2016 salary data from TransparentCalifornia.com.
Unsurprisingly, the LAFD trio earned the three largest overtime payouts of the more than 600,000 workers surveyed statewide:
This the trio’s 2nd year in a row as the state’s top overtime earners, having also topped the list of the more than 2.4 million government workers surveyed in 2015.
Remarkably, Donn Thompson has been appearing in these lists for decades — beginning with a 1996 Los Angeles Times report in which he was highlighted as an example of LAFD’s “paycheck generosity.”
Then, Thompson’s $219,649 combined overtime payout from 1993-1995 was the most of any Los Angeles firefighter, according to the Times. But excessive overtime pay at the LAFD went much further than any single employee, with the Times reporting that the department spent far more on overtime than any of its peers nationwide — nearly tripling the rate found at the New York City fire department, for example.
When asked about the LAFD’s overtime pay system, a Houston fire official reportedly said: “I don’t know of any other department that has it quite that lucrative.”
More alarming than the large dollar amounts was the discovery of what this money was being spent on. The Times reported that most overtime pay:

…is not being used for fires or other emergencies. Instead, most of it goes for replacing those who are out because of vacations, holidays, injuries, training, illnesses or personal leaves. Millions more go to firefighters on special assignments, such as in-house training and evaluation programs.

Thompson pulls in $1.23M over 3 years
Unfortunately, the Times exposé appears to have had little effect.
Thirteen years later, the Los Angeles Daily News reported that overtime pay at the LAFD “soared 60 percent over the last decade,” some of which was still being spent on things like after-hours remedial training for recruits.
And when the Daily News analyzed the department’s top OT earners, they discovered Donn Thompson sitting atop the list once more — this time having earned a combined $570,276 in overtime pay alone from 2006-2008.
Today, that number has risen to $880,810, which boosted Thompson’s total haul over the past three years to $1,229,504. Since 2014, Thompson has received annual overtime payouts that were either the 2nd or 3rd largest statewide — allowing him to earn more than four times his regular salary each year, according to TransparentCalifornia.com.
Thompson’s ability to collect outsized overtime payouts going back more than two decades raises a host of questions regarding safety, efficiency and legitimacy, according to Transparent California research director Robert Fellner.
“The fact that the same employee can receive such astronomical levels of overtime for so long reveals that the system is fundamentally broken.”
Six-figure OT payouts up 760% over past 5 years
In the original Times report, a retired LAFD firefighter described overtime pay as “a little extra bonus for the guys,” that allows them to get “a new boat on the river and a new truck every year.”
Back then, the department’s largest OT payout was just under $103,000 — which is less than half of the more than $330,000 earned by Vlach and Ferrari last year, after adjusting for inflation.
And as the dollar amount of these payouts exploded, so too has their number, particularly over the past five years.
Since 2012, the number of LAFD workers who received overtime payouts of at least $100,000 increased by 760 percent, hitting an all-time high of 439 last year: 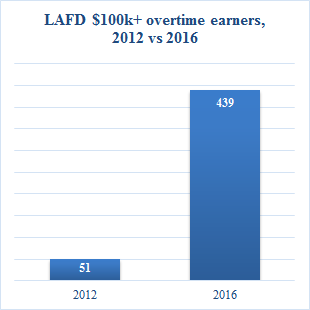 By comparison, only one fire employee in the entire state of Nevada received a six-figure OT payout last year: Carson City fire captain Matthew Donnelly, who earned $110,217 in overtime pay, according to TransparentNevada.com.
A systemic issue that’s here to stay
In 1995, the LAFD spent a “budget-wrenching” $58.6 million on overtime pay, which — at 22 percent of total expenses — was far greater than any of its peers nationwide, according to the Times.
In 2008, that number hit $139 million, which prompted a recently retired fire captain to call for an overhaul of the department’s staffing system, according to the DailyNews.
Now at $197 million — which represents a more than twofold increase since 1995, after adjusting for inflation — overtime pay constitutes 31 percent of LAFD’s expenses, according to the City’s adopted budget for the 2016 fiscal year.
And as it did two decades ago, this rate far surpasses the level paid by other major fire departments nationwide, as shown in the chart below:
Overtime pay as percentage of fire department’s budget, FY16 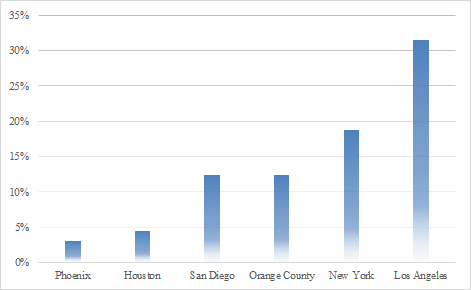 A contract provision that requires vacation leave to count as hours worked towards overtime pay illustrates the root cause of the department’s soaring overtime costs, according to Fellner.
“The issue is not a lack of solutions. Those have been forthcoming from a coalition of experts, including those from LAFD’s own ranks, for decades. The issue is lack of a political will for the precise reason an official outlined nearly two decades ago: fear of political retaliation.
Unfortunately, public unions have weaponized the trust bestowed upon the firefighting profession as a means to enrich themselves, at the expense of public safety and taxpayers alike.”
To explore the full dataset in a searchable and downloadable format, please visit TransparentCalifornia.com.
To schedule an interview with Transparent California, please contact Robert Fellner at 559-462-0122 or Robert@TransparentCalifornia.com.
Transparent California is California’s largest and most comprehensive database of public sector compensation and is a project of the Nevada Policy Research Institute, a nonpartisan, free-market think tank. Learn more at TransparentCalifornia.com.
Posted by Save Marinwood at 12:00 AM