Having a better ZIP Code is the result, not the cause, of a better life.


New York Mayor Bill de Blasio has made the production of "affordable housing"—the political term for subsidized construction or rentals—a centerpiece of his progressive mayoralty. His goal is much more ambitious than additional housing for families with low and moderate incomes. Instead his priority is to ensure that people in different income groups live in the same neighborhoods, using zoning in particular. "Economic diversity," states the city's plan to build or preserve 200,000 affordable units, "must be a cornerstone of housing development."
Such a "mixed-income" approach to new housing has come to be viewed as an incontrovertible good in developments across the U.S. that receive public financial support. Upon closer examination it is not.
The basic problem is a misunderstanding of the ways the range of American neighborhoods—from poor to rich, with multiple points in between—helps, not hinders, the prospects of those of modest means. While these neighborhoods can be caricatured as "economic segregation," they work well in a number of ways.
First, permitting (especially in the pre-zoning era) smaller, denser structures in poorer neighborhoods has allowed housing to be built on a grand scale, including for low-income families. In the late 19th and early 20th century, major U.S. cities were thus able to accommodate a wave of urban poor.
These were not only the much-pilloried tenements. In Brooklyn, where Mayor de Blasio would focus today, more than 520,000 residential units were built from 1880 to 1930. They included tens of thousands of two-family, three-family and four-family structures, and some 21,000 one-to-four-family homes with separate businesses on the ground floor.
The story was similar in Philadelphia over the same five decades, with 299,000 attached row houses, and in Chicago, a vast "bungalow belt," including 382,000 two-, three- and four-family homes were built. The units were incremental steps up the housing ladder for families of limited means—affordable because they were densely clustered and built on relatively inexpensive land.
Census data make clear that a great deal of this lower-income housing, including multifamily housing, was owner-occupied. It could provide the owners with rental income or an adjoining place of employment, and then be sold as owners moved up the economic ladder. Encouraging such housing today would still be desirable.
Why instead are cities such as New York, Boston and Sacramento going to elaborate lengths to socially engineer mixed-income developments? To a great extent, it reflects the unfortunate legacy of public housing. Government-financed and -operated housing projects, conceived as a utopian antidote to slums, devolved into the slums they were meant to correct.
The conventional wisdom is to blame this outcome on the "concentration of poverty." The fact that all but the poorest have abandoned most public housing is believed to be a cause of a city's social and physical ills, rather than an indictment of the core idea of public housing: that only government can provide shelter for those of low income. Through economic integration, planners, politicians and affordable-housing advocates seek to avoid repeating the mistakes of public housing by "de-concentrating" the poor.
There is good reason to think this reasoning is flawed. A Department of Housing and Urban Development demonstration program called Moving to Opportunity, begun in 1994, used housing vouchers to relocate tenants from poor neighborhoods in five cities to better-off suburban municipalities. The households involved in the experiment have been studied by social scientists. In 2004, a research paper by the National Bureau of Economic Research reported "no significant overall effects on adult employment, earnings or public assistance receipt." Two years later another NBER paper "did not find evidence of improvements in reading scores, math scores, behavior or social problems, or school engagement, overall for any age group."
This should not be a surprise. Successful economic upward mobility requires steps—such as employment and education—that lead to a move to a better neighborhood. A better ZIP Code is the result, not the precursor, to a better life. Getting a low-cost unit in perpetuity—Mr. de Blasio makes a virtue of "permanent affordability"—undermines incentive to capitalize on new opportunities that might require a move.
New York's so-called inclusionary zoning, requiring a set-aside of low-price units in higher-priced buildings, also risks making housing prices higher overall. A 2013 guide published by New York University's Furman Center on Real Estate and Urban Policy observed that developers may "try to pass the added costs on to market-rate tenants and buyers, if the market allows it."
Even if they can't, it is clearly impractical to disperse all or most low-income households in higher-income neighborhoods. It makes far more sense to increase the likelihood that poor neighborhoods can be good neighborhoods. That means better public safety, transit, parks and schools—all traditional responsibilities of government.
Mayor de Blasio's housing policy does get one thing right. "Although the city's current housing stock of approximately 3.4 million units is the largest it has ever been, recent additions to the stock have not been sufficient to accommodate the growth in demand." The way to increase the stock is to allow developers to build a wide range of housing for all income groups, with a minimum of regulatory barriers.
Mr. Husock is vice president for policy research at the Manhattan Institute and the author of "America's Trillion-Dollar Housing Policy Mistake" ( Ivan R. Dee, 2003) 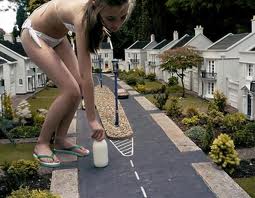 Posted by Save Marinwood at 9:55 PM

Email ThisBlogThis!Share to TwitterShare to FacebookShare to Pinterest
Labels: HUD