Editor's Note: Marin County has reduced the minimum size apartments to 220 square feet or about the size a single parking space.  We are unaware of apartments built to this standard but expect to see them soon everywhere in Marin, particularly within 1/2 mile of the 101 Freeway. 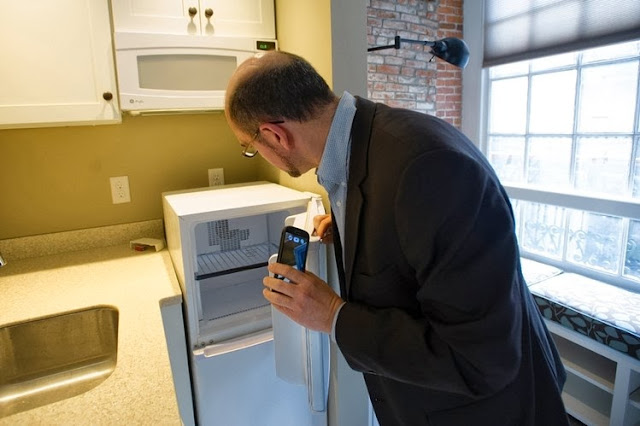 Scott Christiansen looks inside the freezer of his 225 square-foot microloft inside the historic Westminster Arcade in Providence, R.I. Gretchen Ertl for The Wall Street Journal

In recent years, officials in many of the nation's most expensive housing markets have embraced "micro apartments" as a way to provide less-expensive housing for young renters.
They are betting that the tiny apartments—generally the size of a hotel room for about half the rent of a full-size apartment—will attract young professionals and recent college graduates, helping to revitalize city centers.
Micro apartments are about 300 square feet or smaller, though some developers and cities define them as large as 500 square feet. They sometimes lack a separate kitchen or bedroom.
Developers believe that single people in their 20s and 30s will accept less space in exchange for lower rent, even in cities where rent levels aren't especially lofty. Nationwide, rents have soared as the supply of apartments hasn't kept pace with demand.
Census figures show that single-person households made up almost 27.8% of all U.S. households in 2012, up from 25.8% in 2000. While the elderly account for some of the growth, economists and demographers also attribute it to Generation Y, the roughly 80 million Americans 18 to 34 years old. 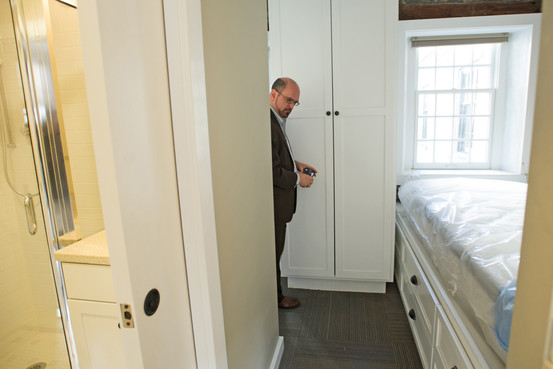 Mr. Christensen looks at a unit in Providence, R.I., where he will stay during frequent commutes from Chicago. Gretchen Ertl for The Wall Street Journal

"This is not a short-term phenomenon," said John Infranca, an assistant law professor at Suffolk University in Boston who specializes in land-use law and has studied micro-apartment projects in several cities. "There is going to be demand for this housing going forward. The [trend] of an increasing number of singles in cities is staying steady across the country."

In Cleveland's University Circle district, an employment and cultural hub five miles east of downtown, developer Coral Co. plans to start construction next year on 50 micro apartments as part of a large, mixed-use project. The 300-square-foot units will rent for $600 a month, compared to the area's typical range of $800 to $1,500 for one-bedroom apartments. Target renters are graduate students and medical residents, including those at the nearby Cleveland Clinic.

In downtown Providence, the 185-year-old Arcade retail building was converted this year to 48 micro apartments. In Worcester, Mass., a newly built complex of 55 micro apartments has leased more than two-thirds of its units, including to students at the Massachusetts College of Pharmacy and Health Sciences.

Micro apartments started gaining popularity decades ago in large cities coping with rising rents, including New York, Seattle and Washington, D.C. The complexes often have communal spaces such as large lobbies and restaurants where tenants can socialize. Developers reason that many young tenants would prefer communal space to personal space and would rather spend money socializing than on rent.

Some real-estate executives aren't sure that micro apartments would work in smaller or less expensive cities because rents aren't sufficiently high to induce enough renters to give up space. "In smaller markets, the rent differential is such that, if you have a good job, you can typically afford the rent of a…full-size apartment," said Jeffrey I. Friedman, chief executive of Associated Estates Realty Corp. , which owns 14,000 apartments averaging 975 square feet in 10 Midwestern and East Coast states.
Another potential problem for smaller cities is that they don't always have the mass transit, night life and cultural facilities to lure younger workers to live downtown. "You can't just drop these [micro apartments] in communities that don't have the amenities to serve that kind of lifestyle," said Kelly Saito, president of Gerding Edlen, the developer of the first of Boston's new wave of micro apartments.

Developer Evan Granoff, who owns the Arcade in Providence, has found that some renters are commuters using the units as second homes. "They're people who have a 45-minute to one-hour commute to work and want to have a place downtown," Mr. Granoff says. "It's people looking for party crash pads. The rents are pretty reasonable, so it's an attractive alternative to staying in a hotel."

Scott Christensen, a 51-year-old information-technology director, frequently commutes between Chicago, where his wife and three children live, and Providence, where he works at a law firm. He plans to move this month into one of the 225-square-foot apartments that Mr. Granoff is offering starting at $550 a month.

"I'm kind of the perfect tenant," Mr. Christensen said. "I won't be in the micro unit all of the time because I travel. While I'll cook some, I'll be in the restaurants downtown constantly."

In March, 25-year-old entrepreneur Ross Chanowski moved into a 464-square-foot apartment in Boston. The unit is large enough for his queen bed, a short couch, a flat-screen TV and a table that doubles as a desk.

"What you don't get in space… you get in the co-living space in the lobby" or on the rooftop patio, Mr. Chanowski said. "If you're the type who likes to be in your apartment all the time, this probably isn't the lifestyle for you."
Write to Kris Hudson at kris.hudson@wsj.com
Posted by Save Marinwood at 5:15 AM