A former employee of the Association of Bay Area Governments pled guilty to wire fraud and will return $3.9 million to local municipalities after embezzling the money in an embarrassing saga for the agency.

Clarke Howatt, a former finance secretary at the Finance Authority for Nonprofit Corp., an ABAG affiliate, embezzled $1.3 million from a bank account with funds for public improvements in San Francisco's South of Market neighborhood. He also embezzled $2.6 million from accounts meant to fund public improvements at Windemere Ranch in San Ramon, an additional theft that wasn't previously disclosed until Tuesday.

Howatt has cooperated with the investigations and confessed to the multiple thefts. He is returning all the money and the agencies are in the process of refunding the money to the appropriate accounts.

Howatt spent the funds on a $1.5 million mansion on the Oregon coast andcommissioned a $24,000 sculpture.

"The accounts embezzled by a former employee will be restored in full. ABAG wishes to thank the U. S. Attorney's office and the Federal Bureau of Investigation for their prompt and thorough attention to this matter," said Ezra Rapport, ABAG executive director, in a statement.

"We are committed to protecting and preserving public funds and we will be working to put measures into place that will enhance our ability to detect and avert any future malfeasance," he said.

Editor's Note:  Too bad he didn't rob a 7-11 or caught with a low level drug offense.  Then he would get a LONG SENTENCE.   Sick of these so called "white collar" criminal scumbags getting away with millions and only a slap on the wrist  after they get caught. 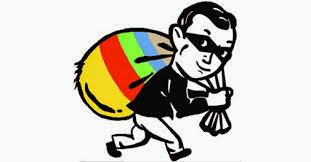