Plan that could lead to massive displacement moves forward, quietly 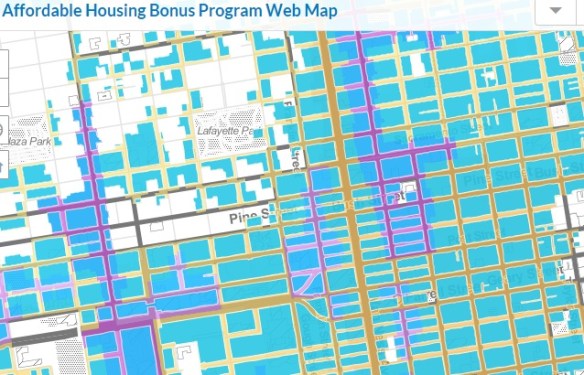 This snapshot of part of the Planning Department’s map shows the wide swath of housing (in blue) that could be torn down and replaced with larger units
By Tim Redmond
DECEMBER 21, 2015 — Under the guise of creating more affordable housing, the Mayor’s Office is proposing a plan that could lead to the greatest wave of displacement since the Redevelopment era of the 1950s. And other than excellent stories from People Power Media and sfbay.ca, it’s gotten very little in-depth news media attention.
The program is called the Affordable Housing Density Bonus plan, and it has its roots in both state law and a 2013 court decision in Napa County.
But in the end, this will be a local decision – and the plan is almost breathtaking in its scope. It is, critics say, a return to the failed policies of an earlier era, when tearing down homes and businesses in the name of improvement was official federal, state, and local policy.
“No matter how you look at this, it’s the Redevelopment model,” said Peter Cohen, co-director of the Council of Community Housing Organizations. “And that model didn’t work.”
A careful analysis of the proposed bill, which is still getting revised, shows: 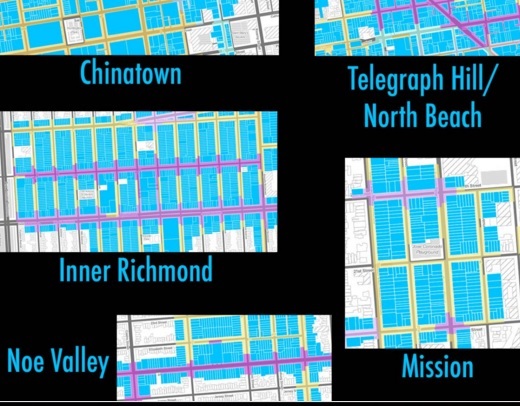 This graphic from People Power Media shows some of the neighborhoods that will be impacted
It’s a gigantic change in planning policy, driven by the idea that the city of the future has to be built by destroying the city of the past. In essence, the proposal is aimed at making San Francisco a better, and possibly more affordable, city for people who are going to move here in the future, at the expense of existing residents.
“It’s a demolition and displacement machine,” longtime housing advocate Calvin Welch told me.
Read this story in 48 Hills: HERE