Largesse for Losers
Translating the Left’s rhetoric, and other random thoughts.

How long do politicians have to keep on promising heaven and delivering hell before people catch on and stop getting swept away by rhetoric?

Why should being in a professional sport exempt anyone from prosecution for advocating deliberate violence? Recent revelations of such advocacy of violence by an NFL coach should lead to his banishment for life by the NFL, and criminal prosecution by the authorities. If you are serious about reducing violence, you have to be serious about punishing those who advocate it.

Have you noticed that what modest economic improvements we have seen occurred during the much-lamented “gridlock” in Washington? Nor is this unusual. If you check back through history, doing nothing has a far better track record than politicians’ intervening in the economy.

With all the talk about people paying their “fair share” of income taxes, why do nearly half the people in this country pay no income taxes at all? Is that their “fair share”? Or is creating more recipients of government handouts, at no cost to themselves, simply a strategy to gain more votes?

Some people are puzzled by the fact that so much that is said and done by politicians seems remote from reality. But reality is not what gets politicians elected. Appearances, rhetoric, and emotions are what get them elected. Reality is what the voters and taxpayers are left to deal with as a result of electing them.

Instead of following the tired old formula of having politicians and bureaucrats give college commencement speeches, in which they say how superior a career as a politician or bureaucrat — “public service” — is to other careers, why not invite someone like John Stossel to tell the graduates how much better it is to go into the private sector, where they can supply what people want, instead of imposing the government’s will on them?

In politics, few talents are as richly rewarded as the ability to convince parasites that they are victims. Welfare states on both sides of the Atlantic have discovered that largesse to losers does not reduce their hostility to society, but only increases it. Far from producing gratitude, generosity is seen as an admission of guilt, and the reparations as inadequate compensations for injustices — leading to worsening behavior by the recipients.
Some people say that taxes are the price we pay for civilization. But the runaway taxes of our time are the price we pay for being gullible.

Whatever the ideology or rhetoric of the political Left, their agenda around the world has been preempting other people’s decisions and regimenting other people’s lives.
People who believe in evolution in biology often believe in creationism in government. In other words, they believe that the universe and all the creatures in it could have evolved spontaneously, but that the economy is too complicated to operate without being directed by politicians.

The United States now has the dubious distinction of having the highest corporate-tax rate in the world. And people wonder why American corporations are expanding overseas, providing jobs to foreigners. The Left may get its jollies attacking “the rich,” but its real victims are other people, the ones who need the jobs that are sent overseas to escape a hostile business climate at home. 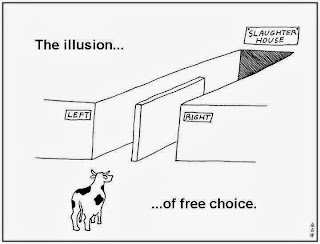 When politicians say, “spread the wealth,” translate that as “concentrate the power,” because that is the only way they can spread the wealth. And once they get the power concentrated, they can do anything else they want to, as people have discovered — often to their horror — in countries around the world.

In an old Western movie, John Wayne encounters a black man. Wayne tells him, “I don’t have a prejudiced bone in my body. I would shoot you as quick as I would shoot any white man.” That is what equality is supposed to mean.
— Thomas Sowell is a senior fellow at the Hoover Institution. © 2012 Creators Syndicate, Inc.

Posted by Save Marinwood at 1:28 PM