Earlier this week, I was notified by a social activist friend in San Francisco that a group calling themselves SFBARF may be coming to town to create disruption and advocate for the Grady Ranch project, "The Revenge Villas".  While, the generous gift of affordable housing is appreciated, the local middle class community of Marinwood-Lucas Valley will be stuck with millions of dollars of development costs for roads, sewer and water, new schools, public safety and fifty years of tax free status.  His attorney, former supervisor, and millionaire lobbyist , Gary Giacomini, says George thinks there are "too many millionaires" igniting class warfare against Marin.
In addition, he has enlisted the help of his Hollywood PR firm to spread the message of "St. George helps the poor, from the Greedy Millionaires next Door" B.S.   George Lucas is one of the RICHEST MEN IN THE WORLD with BILLIONS to spend. Like a nobleman of old,  flogging a peasant for casting a shadow upon his path, he is using our community as his whipping boy.
The issue of Housing Redevelopment is as much about Democracy and Class Warfare as it is about issues of Water, Traffic and Urbanism.  The political and social elites are justifying the destruction of communities to rebuild them in their imagine Smart Growth Utopia as a "necessity to eliminate sprawl (the suburbs).  They will use "any means necessary" to achieve their ends including inciting class warfare, suspension of the local political process, onerous taxation and the destruction of property rights.  Unfortunately, it appears they are also willing to use these feckless BARFers from San Francisco to foster class hatred and call us "Millionaire NIMBYS".
We will not let this happen.  We will Save Marin Again!

From the Berkeley Daily Planet HERE On the left you’ll see a longtime Berkeley consultant who often fronts for developers, Tim Frank. Next to him is Jon Schwark, who told people at the table that he’s lived in a rent-controlled San Francisco apartment for twenty years after moving here from Oklahoma Kansas. Next to him there’s another Midwestern transplant, Ian Monroe from Missouri, in Berkeley for a bit over 2 years, a techie who commutes to San Francisco for work. The guy on the far right, the one wearing the 60s’ style prairie dress and the straw bonnet, is Alfred, the cartoonist.
The small person crouched under the table is, probably, one Libby Lee-Egan, a child, though she’s hard to identify in this photo.
Missing here, but reported to have been present, is Sonja Trauss. She’s the subject of a remarkable article which appeared in today’s San Francisco Business Times:
Pro-density renters group grows, snags tech giant CEO donation
The story reveals that Yelp CEO Jeremy Stoppelman has given Trauss $10,000 for her personal use.
“I wanted to help her personally with a financial gift since she recently gave up her job as an educator to devote herself full time to activism,” he told the SFBT. Activism seems to pay better than it used to in the olden days, doesn’t it?
From the SF examiner: 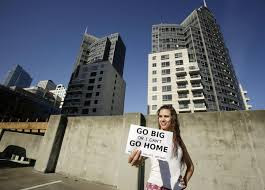 Posted by Save Marinwood at 9:44 AM