Nextdoor bills itself as a “private social network” that limits membership by address. It has increasingly become a place where people discuss politics and other civic issues.CreditNextdoor 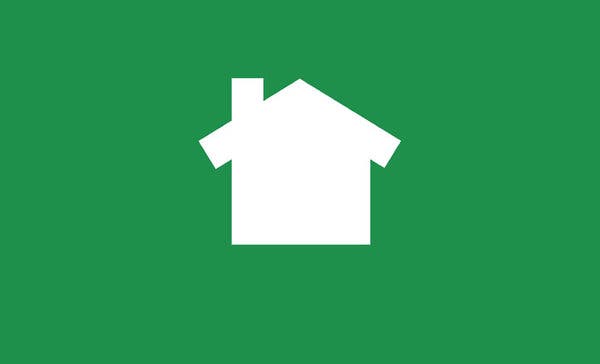 Nextdoor bills itself as a “private social network” that limits membership by address. It has increasingly become a place where people discuss politics and other civic issues.CreditCreditNextdoor

When Hala Hijazi wanted her friends to meet London Breed, then a candidate for mayor of San Francisco, she invited the whole neighborhood.

Ms. Hijazi, a community organizer and consultant, lives in the city’s Marina District and is a member of Nextdoor, the neighborhood social media site.

She planned the meet-and-greet on the Marina’s bustling Chestnut Street and posted it on Nextdoor. One neighbor said he wouldn’t vote for Ms. Breed. She said another called the candidate “the worst.” Still others decided to vote for Ms. Breed after meeting her in person.

“Nextdoor is organic and, sometimes, it is going to be raw,” Ms. Hijazi said.


“People feel like only wealthy donors get access to politicians,” Ms. Hijazi said, adding, “I am doing this as a service to my community.”

Nextdoor, the neighborhood social media site, is partnering with local and state public agencies to bring voting information to more Americans. Here, the District of Columbia Board of Elections advises citizens on polling and where to vote. 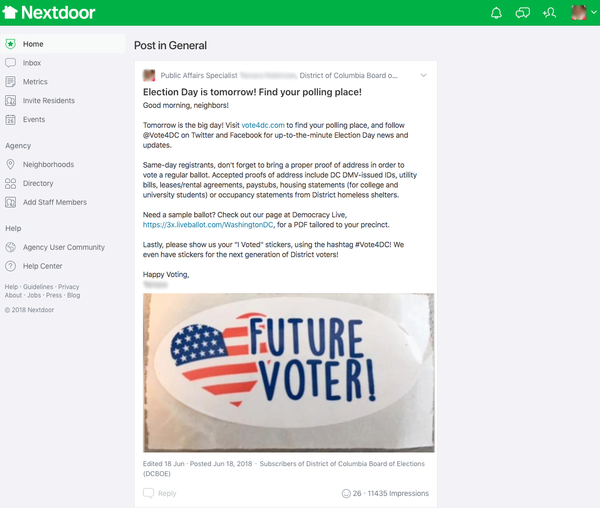 Nextdoor, the neighborhood social media site, is partnering with local and state public agencies to bring voting information to more Americans. Here, the District of Columbia Board of Elections advises citizens on polling and where to vote.CreditNextdoor


Nextdoor has a reputation for being a home for cranky neighbors, people trying to find a reliable plumber, and frantic pet owners looking for their lost dogs.


But, as the saying goes, all politics is local. And with political engagement at an all-time high, Nextdoor is gearing up for the 2018 political primaries and beyond, partnering with public agencies and local governments, and encouraging civil political discourse in an increasing partisan America.

[Sign up here for First Draft, The Times’s politics newsletter | Here’s what’s coming up next on the primary calendar]

Fights between supporters of President Trump (and their nonsupporting neighbors) have driven some Nextdoor users away. To address those concerns, the San Francisco-based company is creating separate forums for neighbors who want to discuss national politics. Some cities, too, are frustrated with the service, saying there is no mechanism for local politicians to have a dialogue with constituents on the site.

Nextdoor bills itself as a “private social network” that limits membership by address, making it difficult for people not in a neighborhood network or, in some cases, an adjoining area, to participate. (A neighborhood can be as small as a few blocks.)

The company was founded in 2010 and said it is active in 175,000 neighborhoods, or about 85 percent nationwide. It is particularly prominent in San Francisco and, according to the company, especially popular with homeowners.

With so many users, Nextdoor sees a big market in voter registration and education. In March, it teamed up with Alex Padilla, California’s secretary of state, to provide voter information in five counties that adopted the California Voter’s Choice Act, which makes it easier for citizens to vote. The company, too, recently partnered with the District of Columbia Board of Elections, one of about 3,000 public agencies that distribute voter and community information via Nextdoor.

“It gives us an opportunity to communicate with real people, not bots or trolls,” said Sam Liccardo, the mayor of San Jose, Calif., and an early advocate for the site. “That makes it a powerful tool.”

Polls are popular on Nextdoor, a neighborhood social media site. Members of local forums are welcome to share comments with other residents who live nearby. 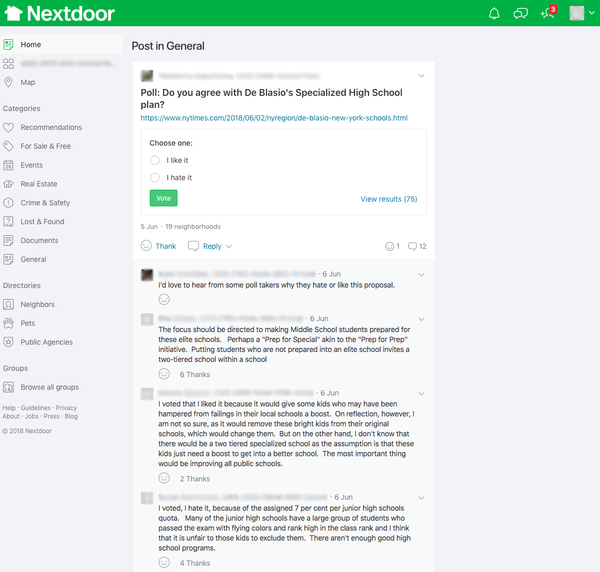 Polls are popular on Nextdoor, a neighborhood social media site. Members of local forums are welcome to share comments with other residents who live nearby.CreditNextdoor


Steve Wymer, Nextdoor’s vice president of policy, said the company has little interest in the political grandstanding that sometimes takes place on the site. “That is not what we think builds community,” he said.

Instead, Nextdoor wants to help public agencies reach their constituents. Agencies that partner with the company set up a special page, and access to information — like where to vote or when to register for a primary — is targeted to the relevant area where a person lives.

Still, users are interested in more than polling places. After President Trump won the 2016 election, Nextdoor saw an increase in disputes about national politics. Isaac Gonzalez, a volunteer forum moderator for the Tahoe Park neighborhood in Sacramento, Calif., said he had to mediate virtual fisticuffs between liberal-minded neighbors and the Trump supporters who lived next door.


Nextdoor has strict guidelines about what can be discussed. Public service announcements, postings about events and “civil debate” are allowed. Telling neighbors how to vote or offensive comments are not.

“After the election there were a lot of sobering posts about where the country was headed, and people felt emboldened to share their true beliefs,” Mr. Gonzalez said. “People learned their neighbors weren’t as progressive as they thought they would be.”

He said he has been approached by neighbors who told him they quit using Nextdoor because there was too much political talk. “They had to stop looking at it,” Mr. Gonzalez said.

To address this, the company has begun testing a new service in 12 markets, including the Bay Area and Dallas, to offer users a political forum separate from their neighborhood feeds.

“The idea was to create a place where people could share information without offending others who don’t want to talk about politics,” Mr. Wymer said. “Our biggest concern is not to divide.”

Nextdoor has an incentive to keep its discourse civil. In 2015, it came under fire when it was suggested that reports and comments left by users in Oakland, Calif., amounted to racial profiling. The company met with city officials, police officers, neighborhood groups and made changes to the social media site.

At the same time, Nextdoor wants to be ready for the flush of interest in the primaries later this year.

“We know a big election cycle is coming up,” Mr. Wymer said. That is why it is focused on helping public agencies educate and register voters.

Rachel Coll, a spokeswoman for the District of Columbia Board of Elections, said her agency reached out to Nextdoor. “We definitely wanted to facilitate a line of information we didn’t have before,” she said.

Still, there are impediments to the free flow of information users of social media have come to expect. Last year, Long Beach, Calif., disabled comments on its postings because city officials, who were not part of specific neighborhood forums, could not access them. Comments from residents, too, were overwhelming. They became frustrated when their concerns were not addressed.

Kevin Lee, a spokesman for Long Beach, said it is impractical to open up posts on its city pages to comments. “A lot of cities are having difficulties,” he said. “We’ve been trying to work with Nextdoor. But how do you have a dialogue when you have such an overwhelming response?”

Mr. Gonzalez said he lets some political commentary slip by. Recently, though, he had to draw the line. One man kept asking his neighbors to meet him at a nearby Denny’s to discuss the United States Constitution.

“Everyone was flagging it as inappropriate,” Mr. Gonzalez said. “He was very aggressive about it.”

Mr. Gonzalez said he took the post down. And he politely asked the man to stop pestering his neighbors.

Editor's Note:  Nextdoor Lucas Valley/Marinwood can be a toxic place.   I have been frequently attacked on that platform that I have no way to respond.  My posts were censored and like many others, I was eventually booted off despite being within the guidelines.  Unpopular opinions can be the target of relentless personal attacks. The neighborhood lead has the power to take down posts as it has recently over the Dixie School name change issue.

Why should such a nakedly biased and censorious platform be involved in voter registration.   This is a clever tool for political hacks to burrow down into districts house by house to create a sociographic profiles on each individual for political manipulation.

Nextdoor is the dream tool for the Technocrats who are deeply suspicious of the "commoners" and their access to democracy.

Although I regret not being able to make local announcements about special events and giveaways,  I do not miss the nasty attacks and censorship.
Posted by Save Marinwood at 9:59 PM

Email ThisBlogThis!Share to TwitterShare to FacebookShare to Pinterest
Labels: nextdoor