Which flag do you fly? the man sitting next to me on the train asks, carefully looking at me. I’ve been staring out the window for the past three hours, using my iPhone to document Chinese landscapes of Olympian construction sites and fields of trees planted with military precision. I’m confused and a little scared by his question, so I answer, I have an American passport. He seems satisfied. You’re a foreigner, he says. When he extracts his wallet to pay for a foil-wrapped meal, I see a red hammer and sickle on his identification card. 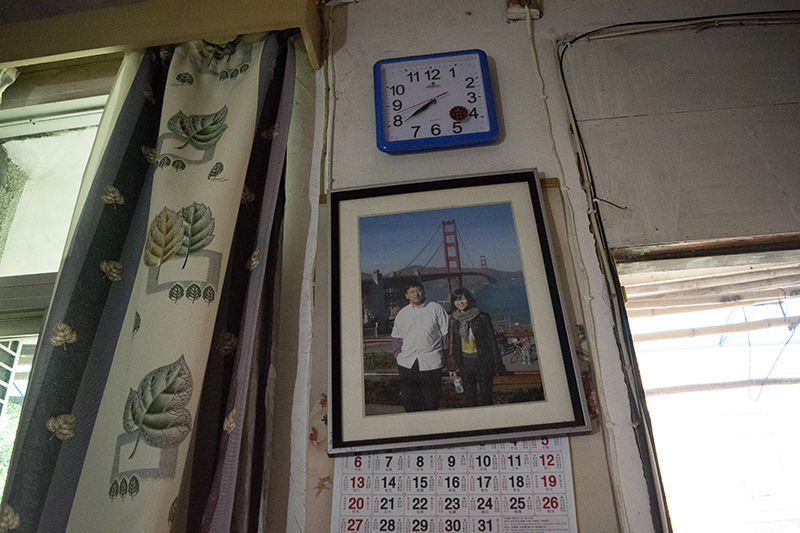 A photo of the author and her cousin in their grandfather’s bedroom in Fuzhou, China.
When I was five years old, I left home with a stranger I was told to call Auntie Wang. I had been living with my grandparents since I was born, with only faint memories of my parents, who left for the United States when I was a toddler. I don’t recall how I was informed of my family’s decision to send me to the US, but I do remember the sting of my immunization shots and being suddenly put on a diet of English vocabulary. My grandparents’ strategy for minimizing my terrified crying was to assure me I could return to China after a week if I didn’t like living with my parents in the US. At the airport, I tried to hold Auntie Wang’s stone hand; my chattering was greeted with silence. I had thought I was going to attend first grade with my best friend, Wang Fan. I was going to catch tadpoles in a lotion jar, eat fireflies in the waning light, spit brown gum into the twisted concrete pond full of lily pads. In old photos my home is a haze of gray quadrangles, but I remember it as the yellow of ducks and the viridian corduroy of my winter coat. I boarded the plane with a faint recollection of my mother’s voice dissolving unevenly into the black thread of a cassette tape.
In the air I had no books to read and my chaperone closed her eyes in exhaustion. So I slipped away to hide — but after I accidentally locked myself in the bathroom I cried hysterically, throwing my fists against the door as I succumbed to nightmares of being abandoned in the airplane after its arrival in the United States. I did not trust Auntie Wang to come searching for me, but she was the one who kicked open the door and pulled me out. It was June. Sticky in Luoyang, heavy with the heated cries of cicadas.

See the full article HERE
Posted by Save Marinwood at 10:37 AM