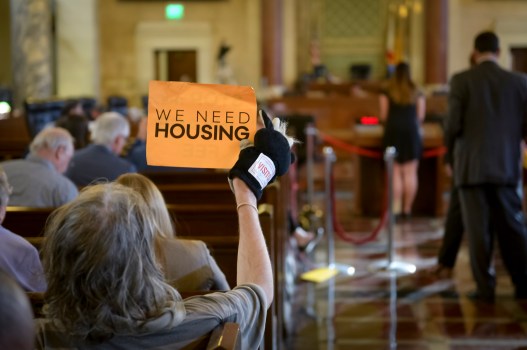 (Photo by David Crane, Los Angeles Daily News/SCNGA woman holds up a sign during a committee meeting at Los Angeles City Hall on the linkage fee.


Only a politician could believe that making housing more expensive to build will create more affordable housing.

But in Los Angeles, that’s what Mayor Eric Garcetti and the City Council are asserting. In December, they approved a new “linkage fee” on new development aimed at raising $100 million per year toward a goal of building 1,500 units of new affordable housing annually.

Don’t bother with the math. They didn’t.

The idea of a linkage fee, which exists in some other cities, is to get money from developers whose projects will displace residents in existing housing or generate a need for additional housing, something that could happen if a new workplace was built.

Hardly anybody is building a new workplace in Los Angeles unless it has a drive-through, but play along.

The “linkage fee” in Los Angeles won’t specifically be linked to the impact from a project. It’s simply a new fee for building in the city.

The early draft of the linkage fee, which has been on Mayor Garcetti’s wish-list since 2015, would have imposed the same fee for similar developments regardless of where they were located in the city. But some council members objected to the one-size-fits-all charge.

The money will go into the city’s Affordable Housing Trust Fund, and city officials say they’ll spend it to build hundreds of units of affordable housing.

Unfortunately, the number of Los Angeles residents who are in need of affordable housing is in the tens of thousands, and those are just the people sleeping on the sidewalks.

Meanwhile, the cost of all other new housing will go up, because developers have to pay these huge new linkage fees just to be allowed to build it.

There are two ways that residential developers can avoid the fees. One is by reserving a percentage of units in their projects for low-income renters. The other option, which is also available to developers of commercial projects, is to get out of Los Angeles and build somewhere else.

Many cities in the Southern California region don’t have linkage fees and don’t treat the construction of a commercial or residential building as a sin that requires some sort of political or financial penance.

In some places, local governments even offer incentives for developers and businesses, to encourage building and hiring.

That’s rare in Los Angeles, where the breathtaking decay of the city is considered incentive enough.

The state Legislative Analyst’s Office has done extensive research into the problem of housing affordability in California, including a detailed report released in the spring of 2016 titled, “Perspectives on Helping Low-Income Californians Afford Housing.”

“The scope of the problem is massive,” the report said, “Millions of Californians struggle to find housing that is both affordable and suits their needs. The crisis also is a long time in the making, the culmination of decades of shortfalls in housing construction. And just as the crisis has taken decades to develop, it will take many years or decades to correct. There are no quick and easy fixes.”

The LAO concluded that while “affordable housing programs are vitally important to the households they assist, these programs help only a small fraction of the Californians that are struggling to cope with the state’s high housing costs.”

To build public-subsidized affordable housing for the 1.7 million low-income California households that spend more than half their income on rent would cost more than $250 billion, by the LAO’s estimate.

But the problem is not just math, it’s logic. When it becomes more expensive to build housing, then less housing is built, and what is built is more expensive.

The LAO report said the real solution is more housing construction, and the scale of the problem can only be matched by privately built, market-rate housing.

“Doing so will require policy makers to revisit long-standing state policies on local governance and environmental protection, as well as local planning and land use regimes,” the report concluded.

So there really is something the government can do about housing affordability. It can get out of the way.
Posted by Save Marinwood at 10:22 AM