China Clamps Down With ‘Grid Management’ To Monitor Citizens 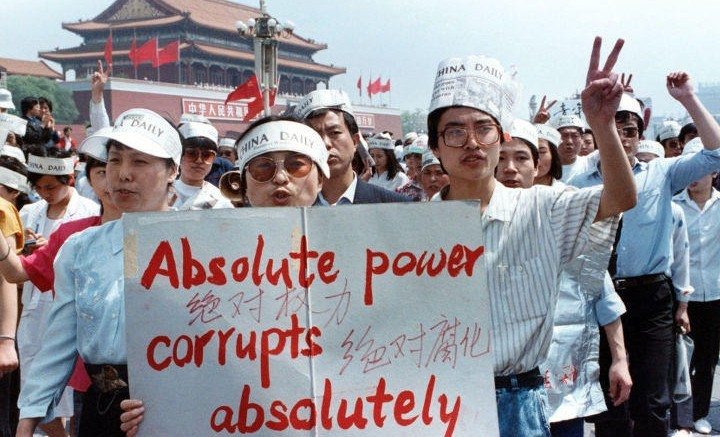 A group of journalists supports the pro-Democracy protest in Tiananmen Square, Peking,
WRITTEN BY: PATRICK WOOD APRIL 4, 2016
China has long led the race to build infrastructure that enables the implementation of Technocracy, and we see this fruit today by its reversion to so-called ‘grid management’ of blocks of citizens. This will allow continuous and personalized surveillance of every citizen to insure their loyalty to the government, and their compliance with all the myriad rules created by unelected and unaccountable Technocrats.
In the teeming city of Guangzhou, 12,000 grid administrators are being hired where each will have monitoring responsibility for 200 families. Within six months, each administrator will be expected to know all pertinent details on the individuals within those families. Monitoring technology, such as cameras and facial identification, the Internet of Things, eavesdropping, etc., will enable such detailed knowledge.
But surveillance capabilities don’t end there.
Last year it was revealed that China was setting up a massive “social credit” scoring system where citizens will be assigned a score between 350 and 950 that reflects their ideological subservience to the government. In other words, dissidents will be duly accounted for and then shunned and shamed into compliance. Those who refuse to comply will be on the government’s short-list for removal from society.
Only two companies are responsible for creating and running this social credit mechanism: Alibaba and Tencent, which run all of the social networks in China. According to an investigation by the ACLU,
Furthermore, China is leading the world in pre-crime technology, or “predictive policing.” One tech journal notes,
“It’s ‘precrime’ meets ‘thoughtcrime.’ China is using its substantial surveillance apparatus as the basis for a “unified information environment” that will allow authorities to profile individual citizens based upon their online behaviors, financial transactions, where they go, and who they see. The authorities are watching for deviations from the norm that might indicate someone is involved in suspicious activity. And they’re doing it with a hand from technology pioneered in the US.”
Any surveillance technology company operating within Chinese borders are required by law to assist in this effort, to wit, they “shall provide technical interfaces, decryption and other technical support and assistance to public security and state security agencies when they are following the law to avert and investigate terrorist activities”.
Apple may fight the FBI over decryption in the U.S., but they will not have that luxury in China.
The state-owned defense contractor China Electronics Technology Group is charged with developing the software that will sift through all online data, activities, financial transactions, work data, behavioral data, etc., to predict which citizens will perform “terrorist” acts.
It could not be more obvious that China is accelerating its race toward total citizen domination, where every aspect of life is observed, analyzed and then corrected according to rules enforced by the Skynet-like system of dictatorial control.
In short, China is perfecting command and control surveillance technology that is already being “exported” to the rest of the world, including the United States and Europe. Big Data and Total Awareness Society is the heartbeat of Technocracy as described in my book, Technocracy Rising: The Trojan Horse of Global Transformation.
According to the Technocracy Study Course (Scott & Hubbard, 1932), three of the seven top requirements given were,
The technology available in 1932 was not able to meet these requirements, but it is available today, and herein lies the danger of Technocracy: Will you settle for being micromanaged to the extent seen in Huxley’s Brave New World? Will you be OK with taking orders from unelected, unaccountable and untouchable Technocrats?
If your answer is “No”, then you had better take to the streets before they all turn into a likeness of Tiananmen Square. That’s where its headed.
Posted by Save Marinwood at 8:36 AM