Why congestion after freeway expansion is a good thing 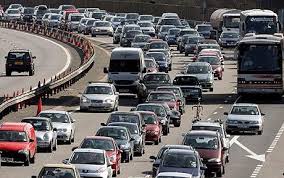 Before getting to this week's items, a commentary on this silly article in the Chronicle, "Adding lanes doesn't reduce congestion. So what is TxDOT doing?"  What always gets lost in these kinds of stories about congestion growing back to previous levels after a freeway expansion is the additional number of people being moved every day, even if they're at the same speeds as before.  More cars and people are being moved, and that's a good investment. Do people honestly believe Houston would have been better off if we had frozen our freeway network 20 or 40 years ago?  Think of it this way: we want government to invest in infrastructure that gets a high utilization (as opposed to roads to nowhere). If they built a new airport runway and it filled up with flights, people would sing the praises of such a great investment, yet if we invest in additional freeway capacity and it fills up, it was wasted money? How does that make sense? It means the government built mobility infrastructure exactly where people needed it - where there was unmet demand - and isn't that exactly what we want them to do as taxpayers? (I made a similar comment on this story criticizing the widening of I10)


The more I think about it, the more the airport analogy really exposes the absurdity of the "induced demand" anti-freeway expansion argument.  Applying the same argument to airports would say every city only needs a single runway, because new runways just enable more flights and "induces demand" for more flying! So absurd!
Moving on to this week's items:

"Cities will sprawl—it’s pointless to try to stop the phenomenon. To the dismay of many environmentalists and urbanists, most people dislike tight quarters. They use rising incomes to buy themselves more space."

Some great stuff recently from The Market Urbanism Report:

"Note: I don’t mean to pick on Houston. In fact, I really like Houston, which is why I talk about it. Plus, they have great urbanists there who are working hard on these issues and might actually ease up on citywide parking requirements!"

"He begins with the obvious case study of Houston. While not completely unregulated, Houston has lighter regulations than other major U.S. metros, and builds much more housing than any of them. Although Houston receives many of the stereotypical scapegoats thought to increase housing prices ― millionaires, immigrants, corporate relocations, and luxury condos ― median home prices in Harris County remain $141,000."

Finally, leaving you with a bit of humor from Reason ;-D

Houston's Anarchic Zoning Laws are an Affront to Sim City

Email ThisBlogThis!Share to TwitterShare to FacebookShare to Pinterest
Labels: traffic