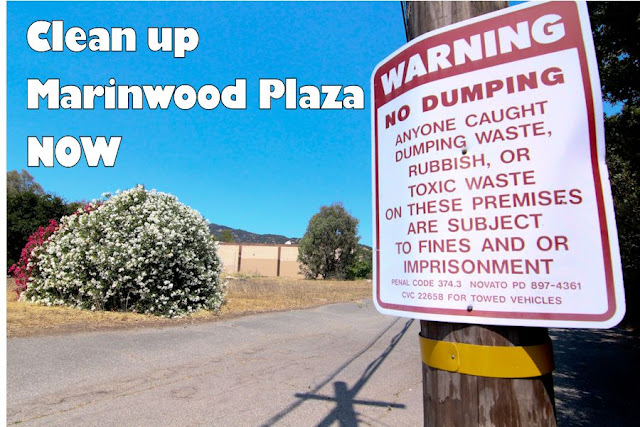 Report from Bill McNicholas on January 11, 2017
“Steve Grant (St. Vincent's), Rob Graham and I (Cleanup Marinwood Plaza Now Oversight Committee) just returned from the RWQCB meeting in Oakland today. First, I delivered a letter from Supv. Connolly to the directors. An update for you on what is happening at the Plaza.

First, the District Staff is reviewing the comments on the cleanup on Siveira Ranch and St. Vincent's and staff will be presenting to the directors at the February 8, 2017 RWQCB meeting..

Second, and most important to us as Marinwood Community, is that the cleanup of the cleaners has started this week. That being removal of lead and asbestos. It should be noted that Hoytt is not going to be demolishing the Plaza sans the market, but doing the cleanup of only the cleaners without demolition--other words-less expensively. The contractor has placed an enclosed conex box at the big door behind the cleaners and he has sealed off the opening all around it to avoid atmospheric exposure. Tentatively, this will be accomplished by 1/16/2017 to allow the digging and removal of the contamination under the cleaners. Per staff at the RWQCD, Hoytt will be removing the contaminated soil and concrete and piling in in back of the cleaners until a waste site gives permission to deliver the contaminated material. This waste pile will be tarped at night, exposed during the day, until such action takes place. Based on the winds and rain that we have experienced over the past week,. there is a strong possibility of the tarp coming off. If that occurs, we could have contaminated material being blown into the surrounding area, including the market, and the runoff going into the storm drains, and even Miller Creek.

In my opinion, this is not a great scenario for public health and safety. Hoytt has until February 1, 2017 to a completion report meeting the acceptable standards for cleanup submitted to the RWQCD. Cleanup Marinwood Plaza Now Oversight Committee, at the meeting today, voiced concerns that failure to comply in full with the executive order, that Hoyt be penalized per regulations since Hoytt has had since April 19, 2016 to comply with this date.

In addition, I brought up the Eastern Hot Spot behind the cleaners where the cleaning solvent was dumped, still no plans to clean that up and the monitoring well reading is 34 ug/l which is 7 times acceptable level for drinking water. RWQCD staff said that the soil met the standard, but the reading in the ground water wasn't a concern. In addition, Rob Graham spoke to the contaminated waste pile. The Oversight Committee will be attending the February 8, 2017 RWQCB meeting along with representatives from Silveira Ranch and St. Vincent's.

I anticipate that Supv. Connolly will also be in attendance. We would appreciate additional members of the community attending with us. The more the more effective is our concerns. I will be providing additional information on the meeting time. I will continue to post updates on what is happening at the Plaza.

You may also present your concerns and comments to Mr. Bruce Wolfe, Executive Officer, RWQCD, Bruce.Wolfe@waterboards.ca.gov.”
Posted by Save Marinwood at 9:33 PM