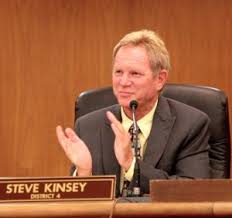 Los Angeles Times
A lawsuit served this month against five California Coastal Commission members — including Marin County Supervisor Steve Kinsey — could cost them millions of dollars in civil fines if the courts confirm hundreds of alleged transparency rule violations.
Spotlight on Coastal Corruption, a small nonprofit organization formed solely to pursue the allegations, filed the lawsuit in San Diego County Sup erior Court in mid-August against Commission Chairman Kinsey and commissioners Erik Howell, Martha McClure, Wendy Mitchell and Mark Vargas.
The suit, served at the panel’s meeting in Newport Beach on Sept. 7, accuses the commissioners of violating disclosure laws for so-called ex-parte communications a total of 590 times during the past two years. If the court finds widespread violations, each member could face hundreds of thousands of dollars in civil penalties.
At least four other lawsuits are challenging coastal development permits partly on the grounds that commissioners improperly disclosed their contacts, did not report them

on time or used the communications to hold a series of behind-the-scenes meetings before voting on a project.
In one case, an Orange County judge heavily criticized commissioners for incomplete disclosure forms.
The Spotlight suit, however, is apparently the first to seek fines against individual coastal commissioners.
“The Coastal Commission has gotten off track,” said Kathryn Burton, Spotlight’s president. “It needs to come back into compliance with the law and increase transparency as well as public accountability. Some commissioners are being very arrogant about the law.”
The defendants declined to discuss the case or could not be reached for comment. A Coastal Commission spokesperson said the state attorney general’s office is reviewing the matter.
Spotlight’s lawsuit is the latest development in an ongoing controversy about private ex-parte communications between commissioners and developers, lobbyists, environmentalists and anyone else with a stake in the decisions of the powerful land use agency.
In recent months, courts and the Los Angeles Times have scrutinized commissioners for failing to report ex-parte contacts, or disclosing them late or with little detail, in apparent violation of the statutory requirements.
Kinsey decided not to vote on a controversial proposal to build hundreds of new homes on open land overlooking the Newport and Huntington Beach shoreline on Sept. 7, because he had two unreported ex-partes related to the proposal.
Though Vargas had filed one ex-parte disclosure eight months late, he voted on the project after consulting with the agency’s general counsel.
Ex-parte communications can involve telephone calls, face-to-face meetings, emails or other written material related to a pending matter. The contacts are outside official public hearings.
Under state law, commissioners are required to report such interactions in writing within seven days of the communication. If expartes occur within a week of a commission meeting where the subject matter is on the agenda, they must be disclosed orally from the dais at the hearing.
The reports have to include the date, time, type and location of the communication as well as the identities of everyone who initiated the communication and participated in it.
Commissioners are further required to provide a comprehensive description of the content of their exparte contacts, including all text and graphic material if any was presented in the course of the communication.
Finally, the disclosures must be placed into the commission’s official record so the public can review them.
Commissioners also are prohibited by law from influencing a decision if they knowingly fail to report exparte contacts related to the matter.
Each violation of the disclosure requirements carries a maximum fine of $7,500. The lawsuit asserts that the five commissioners are subject to additional fines of $30,000 for each disclosure violation because such violations are considered separate offenses under the state’s Public Resources Code.
Cory Briggs, the attorney for Spotlight on Coastal Corruption, said the group analyzed all written and oral ex-parte reports made by the commission’s 12 voting members between January 2015 and August 2016.
Spotlight decided to sue Howell, Kinsey, McClure, Mitchell and Vargas because they appeared to have the most alleged violations, Briggs said. The lawsuit charges that Kinsey violated reporting requirements at least 140 times, Howell 96 times, Mc-Clure 82 times, Mitchell 120 times and Vargas 150 times.
If all the alleged violations are sustained, Kinsey faces a fine of up to $1,050,000; Howell, $720,000; McClure, $630,000; Mitchell, $900,000; and Vargas, $1,125,000, court records state.
Briggs said many of the written disclosures in question lacked comprehensive descriptions of the communication. Others allegedly failed to meet required deadlines by a few days to eight months while eight ex-partes were never disclosed, the lawsuit states.
The oral reports, Briggs said, were brief, averaging about 20 to 30 seconds, not enough time to provide a meaningful disclosure. In some cases, commissioners said only that their exparte contact “was similar” or “substantially similar” to the oral report of a fellow commissioner given earlier.
The suit, Briggs said, focuses only on significant violations. “We are not seeking penalties for the lack of a signature.”
The lawsuit alleges that the violations were deliberate because the commissioners received training about ex-parte disclosure requirements. Agency officials say the instruction occurs at commission orientations and periodically during presentations by the chief counsel at public meetings.
“Nonetheless, defendants consciously disregarded the requirements of (the law) based on an arrogant, corrupt belief that their ex-parte conversations were none of the public’s business, at times using personal email to conceal the conversations,” the lawsuit states. “Defendants’ repeated violations were not innocent oversights.”
Earlier this month, California lawmakers, under pressure from pro-development interests, defeated a bill that would have prohibited ex-parte communications by commissioners.