Baltimore from air by aa440 credit.jpg 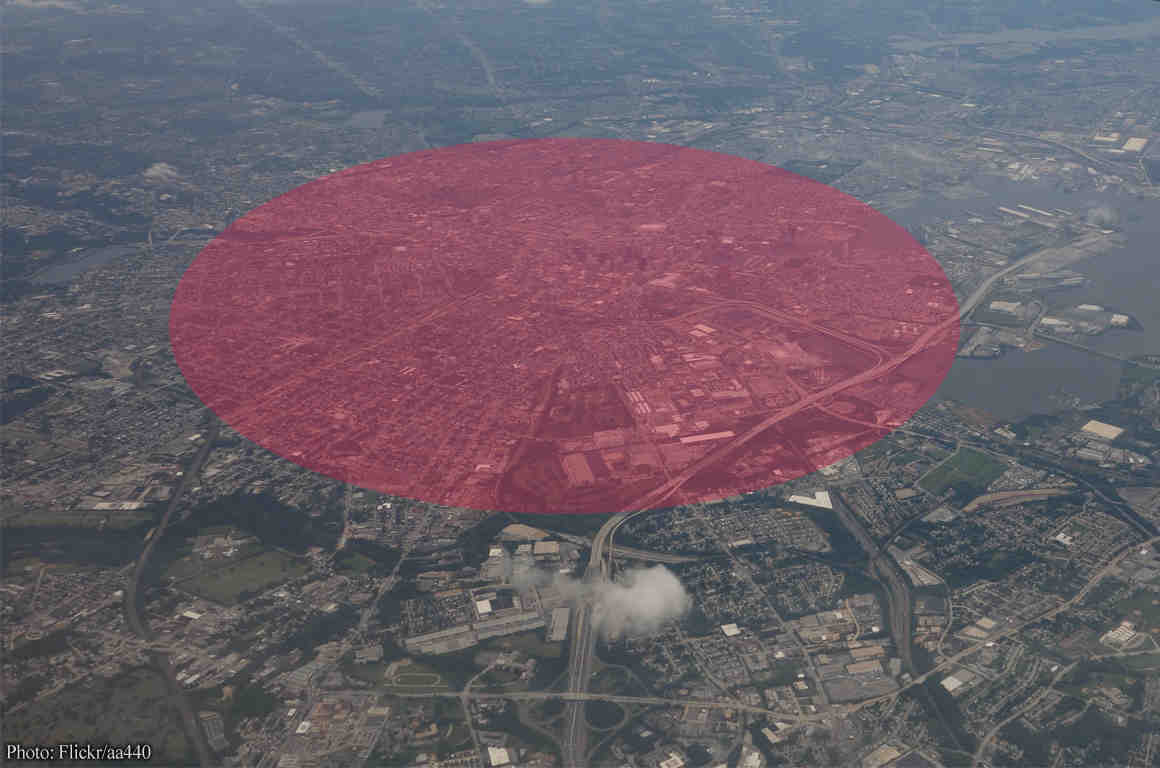 Bloomberg Businessweek reported late Tuesday that the Baltimore police have been subjecting that city to a vast and powerful aerial surveillance system since January, without telling, let alone asking, the public that they serve. This is a big deal.

This system, known as “wide-area surveillance” and run by an Ohio company called Persistent Surveillance Systems, involves the deployment of megapixel cameras on a Cessna aircraft, which circles over a city for up to 10 hours at a time, continuously photographing a 30-square-mile area and giving police the ability to retroactively track any vehicle or pedestrian within that area. It is the ultimate Big Brother “eye in the sky.”

I have been warning against this technology since early 2013, and wrote about it again a year later after Persistent Surveillance president Ross McNutt gave me a presentation on it. Then, in 2015, we learned that Cessna aircraft were circling over Baltimore in the wake of protests following the police killing of Freddy Gray, and immediately feared that this kind of wide-area surveillance was involved. Further reporting revealed that these flights, which were also spotted over many other American communities, were being run by the FBI, which told the AP that its fleet was “not equipped, designed or used for bulk collection activities or mass surveillance.” At the time, we were relieved to hear that.

Now we learn that wide-area surveillance is being conducted over Baltimore. And despite all the public questioning and statements of concern by us and others, and our freedom-of-information requests, and the extensive press coverage the FBI’s Baltimore flights received, the Baltimore police did not see fit to ask the public's permission to use this startling new technology on the city’s population. Instead, it arrogated unto itself in secret the decision to deploy this technology. It continues to be stunning that American police forces feel that they can use deeply radical and controversial surveillance systems, which raise the most profound questions about our society and its values, without telling the public that will be subject to these technologies—the public they are supposed to be serving.

In fact, the Baltimore police went out of their way to avoid telling the public what they were doing. As Businessweek reports, they refused to comment on the program for the story, and the city has not even acknowledged that it exists. When photos from the system led the police to believe that a man was involved in a high-profile shooting, the police didn’t answer questions from the community about why they suspected the man in question. (To give credit where credit is due, McNutt, unlike the police and unlike other surveillance companies such as the makers of Stingray cell phone tracking equipment, was forthcoming about his company and technology with Businessweek, as he was with me, and said that he believes the technology should be used in a transparent, publicly acknowledged manner.)

JOIN TODAYWhen the police in Dayton, Ohio presented a proposal to use persistent aerial surveillance, community members strenuously objected, and the city's political leaders dropped their attempt. But because of the secrecy in Baltimore, residents there never had that chance.

It is all the worse given the Department of Justice’s recent scathing report of rampant, long-running and pervasive racial bias in the Baltimore Police Department and an almost total lack of accountability for wrongdoing.

The Baltimore program, Businessweek reports, has been funded by a private Texas philanthropist. As we so often see with surveillance technologies, from license scanners to Stingrays to drones, this outside grant functioned to short-circuit democracy, because it meant the police did not need to bring a funding request to the city council or other elected officials, who might have brought up the significant values questions that this technology raises, and asked what checks and balances were in place to govern such a powerful surveillance system.

Several other points about this technology from the article:
One of Ross McNutt’s arguments for why this system is not overly intrusive is that the photographic resolution is very low. He emphasized to me that the system “can’t tell who a person is,” and as Businessweek describes, a pedestrian surveillance subject appeared as “little more than a faint, grainy dot with no identifying characteristics.” Analysts also can’t tell the make or model of the cars they can follow around a city. However, Businessweek also makes clear that this is a hollow argument. In several instances described in the story, police were able to match an aerial “pixelated dot” pedestrian to one of the more than 700 street-level police cameras installed around Baltimore, and obtain clear ground-based photographs of a subject. Surveillance systems never stand in isolation; there are always synergies at work. And as the article also notes, the “pixelated dots” can be followed forward and backward in time as they enter and exit homes and other buildings, and even without any other technology, that simple fact can be used to identify people. Indeed, the entire purpose of the system is to identify particular individuals.

McNutt assured me in 2013, “We only do major crimes; it's all we have time for.” But Businessweek describes a Persistent Surveillance analyst working (“for practice”) on a case involving the “illegal dumping of wood,” and how the system is used for other, less-than-major crimes, such as the driving of illegal off-road motorcycles on city streets. At one point Businessweek describes McNutt, eager to show how his technology can deal with serious crimes, exclaiming, “I’m tired of these little hit-and-runs.” Furthermore, the article portrays McNutt as using his system to “monitor[] the city’s reaction to the Goodson verdict,” in which an officer charged in the death of Freddy Gray was acquitted. Such a mission not only goes far beyond the serious-crime scope that McNutt describes in his presentations, it touches on the sensitive area of citizens exercising their First Amendment rights to protest. Later in the article, one of McNutt’s employees is described talking about being alert for the possibility of disruptions by Black Lives Matter activists. All of which is a major reminder of what Americans can expect if they swallow this technology: it will likely undergo mission creep and expand across numerous dimensions once deployed.

The operation of this system as observed by Businessweek is quite labor-intensive, from the operation of the plane to the somewhat laborious manual analysis of imagery. Yet we can expect that eventually the Cessna will be replaced by a far cheaper drone, the attached cameras will become even more powerful, and the analysis will be automated by every-smarter AIs. (Those AIs might even go from responding to police reports of crime to pro-actively watching the movements of everyone in an attempt to detect “suspicious” activity such as aimless movements.) All of which will mean the technology becomes cheaper, more widespread, used for an ever-widening set of purposes (bank robbers today, jaywalkers tomorrow).

Businessweek details how this technology is a direct import into American cities from the overseas battlefields of the last 15 years: it is a domestic adaptation of a technology that McNutt first developed for the Pentagon to use in Iraq. This is an all-too-typical pattern when it comes to surveillance technologies.

It’s unclear what the retention period or policy is for the imagery captured by this system. The article mentions that analysts can review footage “weeks” after it’s captured, but is no more specific than that. In my talk with him, McNutt indicated that he would leave such policy questions up to his individual police department clients.

People sometimes ask how this technology differs from ground-based cameras. Baltimore, like some other cities, has a lot of ground based cameras, but those cameras do not cover every square inch of the city, and their feeds are not stitched together with an artificial intelligence agent that is capable of using them in a coordinated fashion to follow individuals around anywhere within a 30-square-mile area. Make no mistake: this technology is a big leap toward an unknown surveillance future.

McNutt describes this technology as “Google Earth with Tivo.” But another description might be giving the government a virtual time machine, which allows them to go back and retroactively surveill any of us at any time. It is the technological equivalent of having a GPS attached to each and every one of us every time we walk out of our door. This is a technology that promises to do for our physical movements what the NSA has aimed to do with our communications: collect it all. Simply put, that is an enormous amount of power to give to a government agency. We Americans (as well as the residents of other countries) are going to need to decide whether we are willing to accept the potentially sweeping changes this could bring to our society.

Editor's Note:  Marin County is increasing its surveillance technology everywhere in Marin. Virtually every major intersection and highway is monitored by cameras and tracking devices.  Know that most "random traffic stops" are not random at all.

Can we be far behind Baltimore?